Approximately 5,900 non-traditional Subway locations in the U.S. and Canada experienced a 13 percent increase in same-store sales during the first three quarters of 2022.

The sub sandwich brand is gaining ground with more than 400 Grab & Go locations, plus a new Smart Fridge optimized for college campuses and more unique spaces.

As quick-service restaurants continue scrambling to keep up with consumers who expect food on demand, drive-thru-only prototypes are becoming ever more prevalent (See: Taco Bell, Smoothie King, Jack in the Box). Meanwhile, Subway is reaping the rewards of investing in its non-traditional presence.

Approximately 5,900 non-traditional Subway locations in the U.S. and Canada—about 25 percent of Subway’s North American footprint—experienced a 13 percent increase in same-store sales during the first three quarters of 2022, compared to the same period in 2021. And locations hit hardest by COVID-19 restrictions such as airports, college campuses, and hospitals experienced a 22 percent average increase.

“As more of our guests search for dining experiences to meet their ‘in-the-moment’ needs, the brand’s non-traditional locations and platforms can serve them wherever and whenever they are craving Subway,” Taylor Bennett, vice president of non-traditional development at Subway, said in a statement.

“There is a significant opportunity to expand our footprint in non-traditional locations and for franchisees to generate incremental revenue for their business,” Bennett added.

Along with increasing its presence in non-traditional locations such as truck stops, airports, convenience stores, gas stations, casinos and more, Subway is also rolling out innovative options that allow franchisees to expand their portfolios without the higher costs of brick and mortar.

The sub chain piloted a Grab & Go platform in 2020 as a convenient option for guests on the go, in which fresh sandwiches are prepared daily by owners and are distributed to local retail locations. The idea, prompted by franchisees, has quickly gained ground and is available at more than 400 Subway locations across North America and counting.

“Consumers are drawn to sandwiches made fresh daily from a brand they know and love, versus competitor items that rely on a 14-day plus shelf life,” Karla Martinez, director of innovation for non-traditional development, said in a statement.

In September, Subway leveraged its Grab & Go program to install the brand’s first interactive, autonomous smart fridge at the University of California-San Diego.

Though it first appears as a simple vending machine bearing the Subway logo, college students and professors can talk directly to the smart fridge, which utilizes natural language processing to answer questions. Weight-sensor shelves and artificial intelligence enable the smart fridge to take orders, dispense sandwiches, and charge customers in a contactless and cashless transaction. Plus, UV-C light sanitizes the fridge after every purchase. 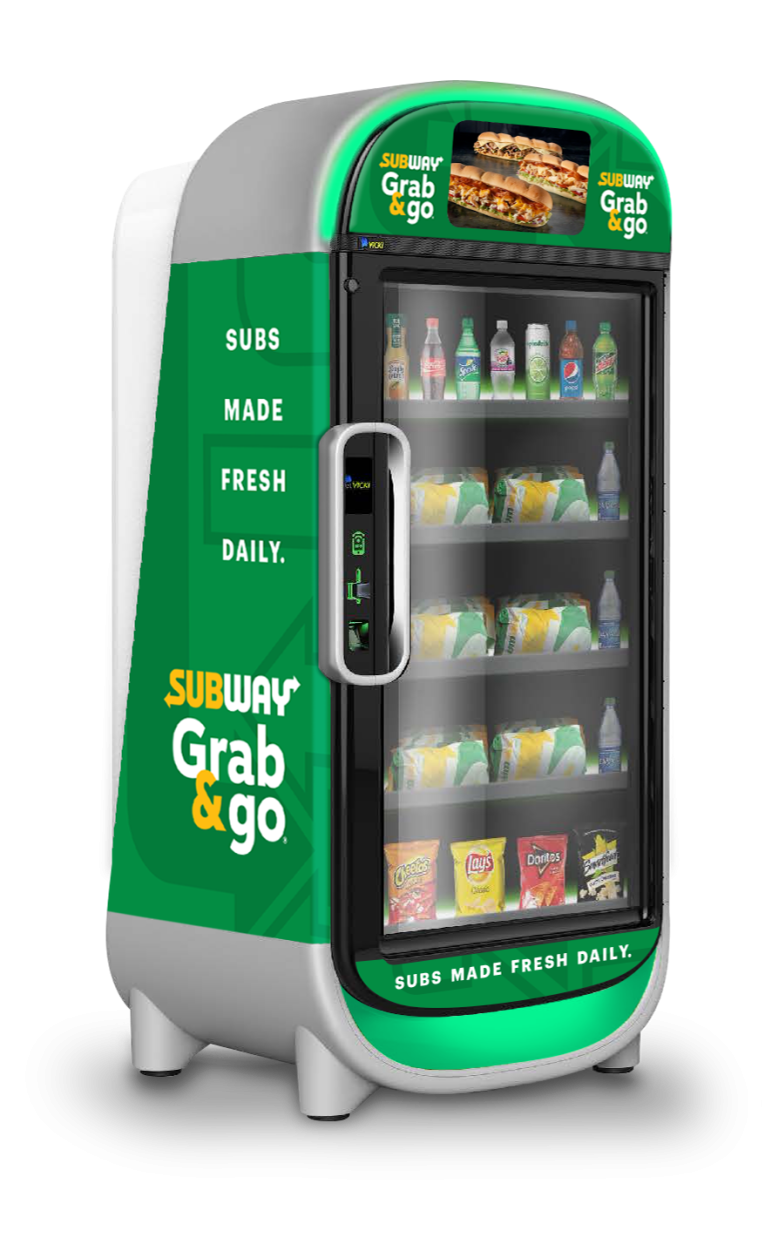 In September, Subway installed its first interactive, autonomous smart fridge at the University of California-San Diego.

Subway noted positive initial feedback from college students, who enjoy the convenience of being able to grab a sammy 24/7. The brand is also seeing strong interest from franchise owners who want to expand their portfolios with smart fridges.

These new initiatives and programs are all part of the brand’s transformational journey, which started in 2021 with a total overhaul of the guest experience. Subway’s digital sales surpassed $1.3 billion in 2021, three times as much as 2019, driven by its updated and more user-friendly mobile app and partnership with DoorDash that offers direct delivery through Subway’s website and app.

With an international presence of more than 37,000 restaurants across more than 100 countries, Subway is allowing owners across all regions to introduce non-traditional concepts, from Grab & Go and express kiosks to ghost kitchens and drive-thrus. Subway’s plans for growth include partnering with new master franchisees and country developers who want to test new formats in their markets, and the brand expects non-traditional locations to “increasingly make up a significant portion of future restaurants,” according to the company.

Subway Evolves Into its Next Stage of Growth

Can the Labor Shortage Bring Out the Best in Restaurants?
For Sweetgreen, Automation Opens ‘Infinite’ Possibilities
Dutch Bros' 800-Unit Goal is Well Within Reach