Apptopia data indicates usage of car marketplace apps are all above 2019 levels.

The top 10 quick-service restaurant apps in the U.S. last month were downloaded just 2.2 percent less than the month prior. At 8.83 million new installs between them, this is the second highest month for the top 10 since we started tracking in May of this year. This month, we’ll examine the successes Dunkin’ and Chipotle have seen from their investment into mobile, but first, we’ll break down this month’s ranking. 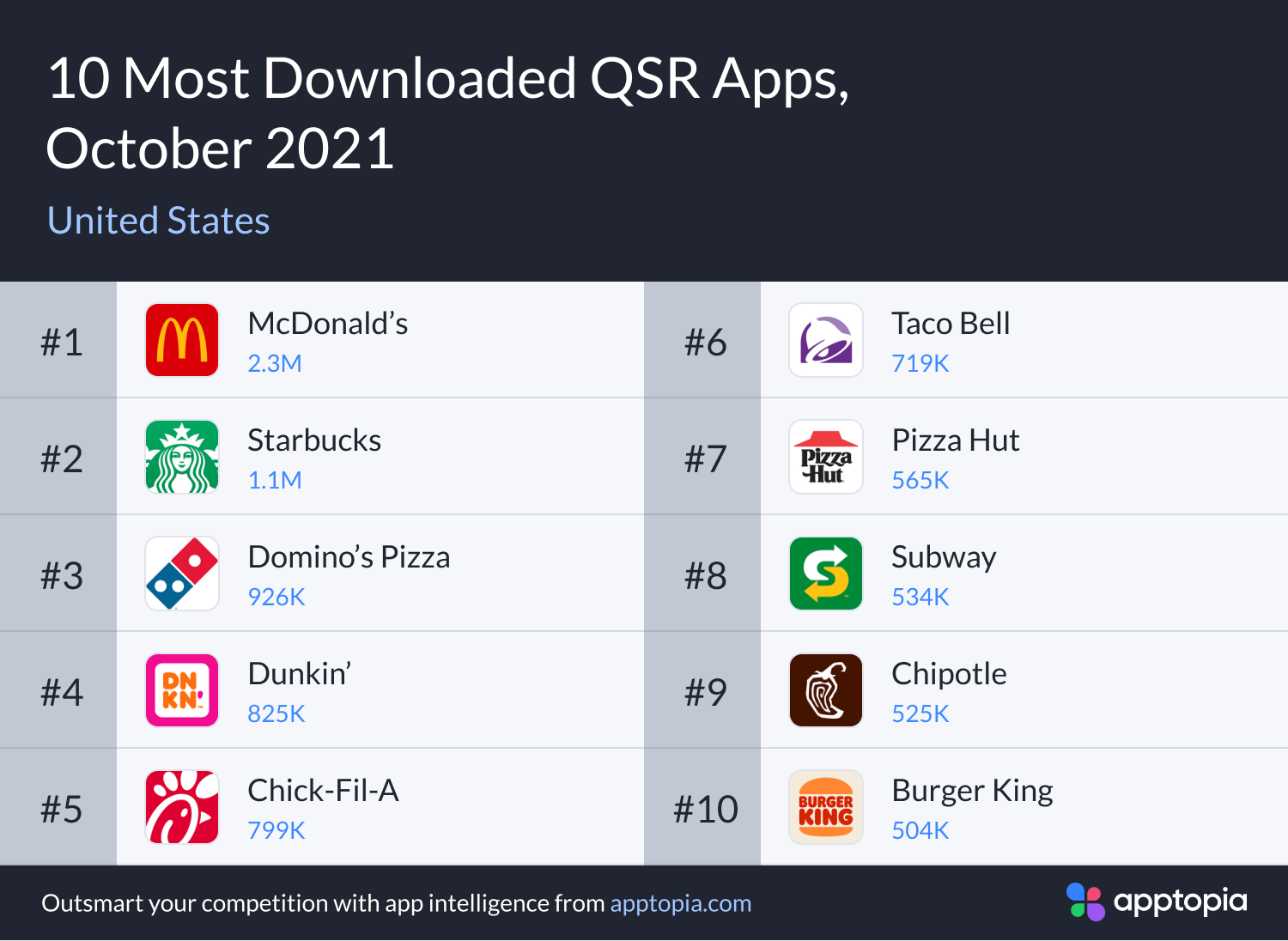 The 2.2 percent drop was mostly due to McDonald’s seeing its monthly downloads decline by 200k. This is nothing to be concerned about for the company though as it’s really just water finding its level. August saw the most monthly downloads for the McDonald’s app since October 2018 when it launched its Trick. Treat. Win! game which required the app to fully participate.

Taco Bell and Dunkin’ swapped spots, with Dunkin’ getting the better and moving into the No. 4 spot. Chipotle rose five spots to secure a place on the chart at No. 9 while Sonic got the boot down to No. 14. Wendy’s also fell off the chart, moving down to No. 13. Subway bumps up one spot as well does Burger King into the No. 10 spot.

Even though it only moved two spots in our top chart, Dunkin’ had the largest increase in absolute download numbers, with almost 100,000 more in October than September. The Dunkin’ mobile app has been gaining since August though, when it was announced the app was available via Apple CarPlay. Apptopia’s X-Ray dataset indicates it is the only top quick-service app in the U.S. with this integration.

CarPlay and Android Auto are big opportunities for quick-service restaurant mobile apps. Apptopia data indicates usage of car marketplace apps (Carfax, Carvana), parking apps (ParkMobile, SpotHero), and car rental apps (Hertz, Turo) are all above 2019 levels, YTD. The pandemic has spurred this (potentially temporary) move away from public transit. As vehicle demand has increased and we’re spending more time in cars, the use case for a quick-service app to be available safely in-car is seemingly obvious. Who wouldn’t want to order their regular coffee and breakfast sandwich with ease on the way to work?

Looking at iOS estimates of user sessions comparing Dunkin’ to other top coffee chains, we see Dunkin’s app go from below market average to opening up an 18.5 percent gap above it, once CarPlay became available.

Tim Horton’s growth looks to have come from a combination of its National Coffee Month campaign, which is only available for app/online purchases, and its charitable Smile Cookie campaign.

While Chipotle wasn’t this month’s biggest gainer in terms of absolute downloads, it did move the most rank spots, rising five spots to sit at #9 in our top chart. This app has been able to have consistently high user sessions compared to its peers because of its well-run loyalty program. 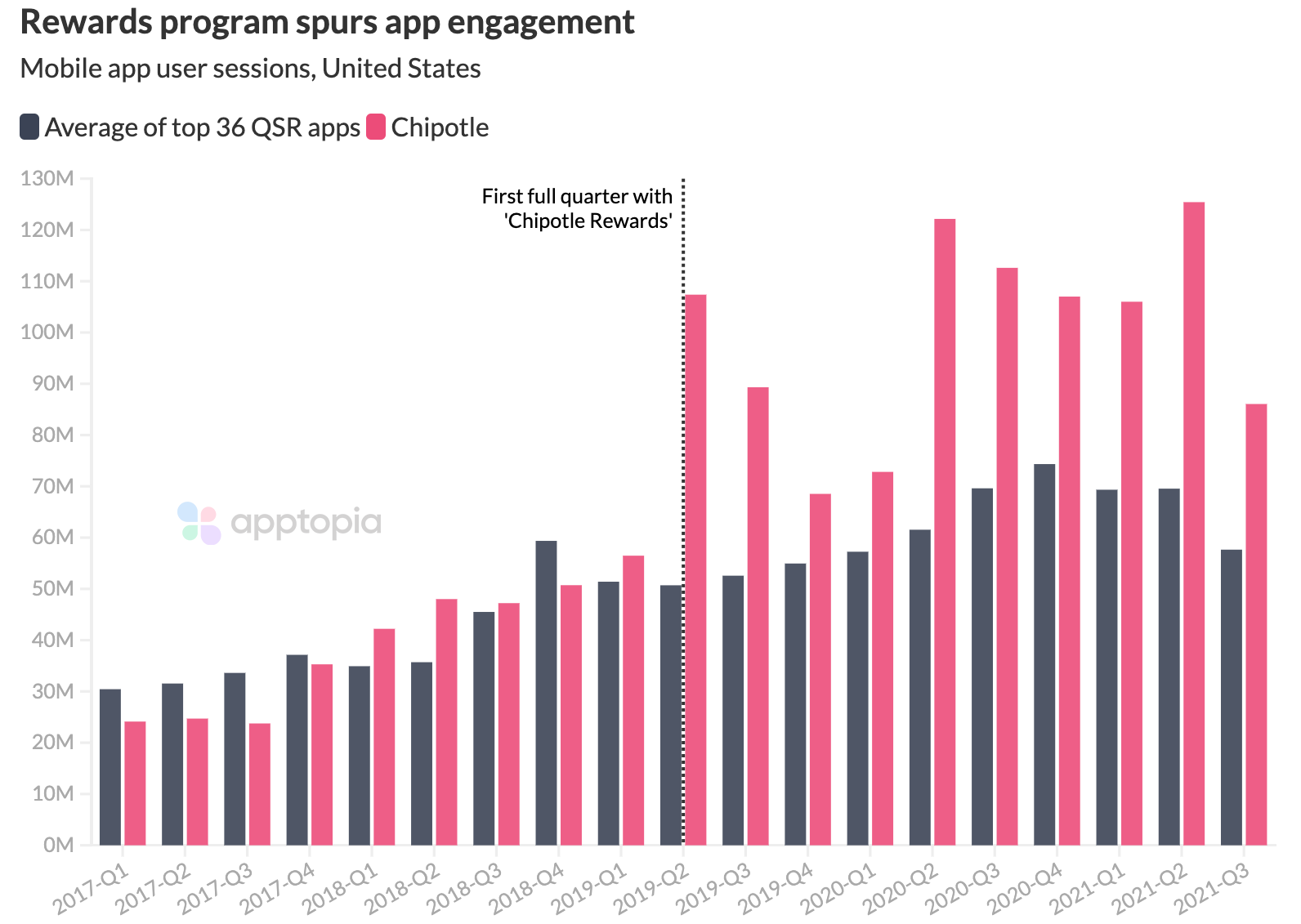 Since introducing its program, Chipotle has had one of the best quick-service restaurant apps from an engagement perspective. Why? Because the team there understands that a loyalty and rewards program is a living thing. It is not a set it and forget it program like it used to be. When the market became saturated with loyalty programs, it became necessary to keep fueling the fire with new interesting, entertaining and innovative campaigns. For example, the pop in Q2 2021 you see in the chart above is from the creation of a retro racing video game where loyalty members competed for prizes, including a brand-new Tesla.