With delivery exploding, what’s really the best strategy for getting food to customers quickly—and without ripping off your restaurant?
Restaurant Operations | October 2019 | Daniel P. Smith

“The delivery service model started to really develop and became a great sales-building opportunity, especially since some partners could provide the same service across all of our units,” says Buona vice president of operations Don Buonavolanto.

Driven by consumers’ growing appetites for convenience and the rise of third-party players like Uber Eats, Postmates, and Grubhub, foodservice delivery has become a ubiquitous element of modern life—and one that shows no signs of slowing. According to L.E.K. Consulting’s “Meals on Wheels: The Digital Ordering and Delivery Restaurant Revolution” report released earlier this year, restaurants’ delivery sales are projected to grow at more than three times the rate of on-premises revenue through 2023.

That hard-charging surge has prompted quick serves of all shapes and sizes across the U.S., from McDonald’s and Jimmy John’s to up-and-coming fast casuals and single-unit independents, to prioritize, strengthen, and solidify their delivery offerings. It’s also spurred rich debate on the best way to approach delivery, whether that means running an in-house delivery team or outsourcing delivery to any number of third-party providers. (And if it’s the latter, then which ones?)

In this corner: In-house delivery

Earlier this year, Jimmy John’s, one of America’s few non-pizza chains with a storied history of delivery, proclaimed it would never authorize third-party delivery services to deliver its food.

“Only Jimmy John’s delivers Jimmy John’s,” says John Shea, chief marketing officer for the Champaign, Illinois–based sandwich giant. “We don’t trust anyone to make our sandwiches, so why would we trust anyone else to deliver them?”

Jimmy John’s shunning of the third-party delivery market is fueled by a 36-year run optimizing its ability to accommodate delivery. From site selection and 5-minute delivery zones to in-store operations aimed at getting sandwiches made and out the door, Jimmy John’s has built its business with fast, fresh delivery top of mind.

“It’s ingrained in our business model,” Shea says, adding that Jimmy John’s has some 45,000 delivery drivers in its network. 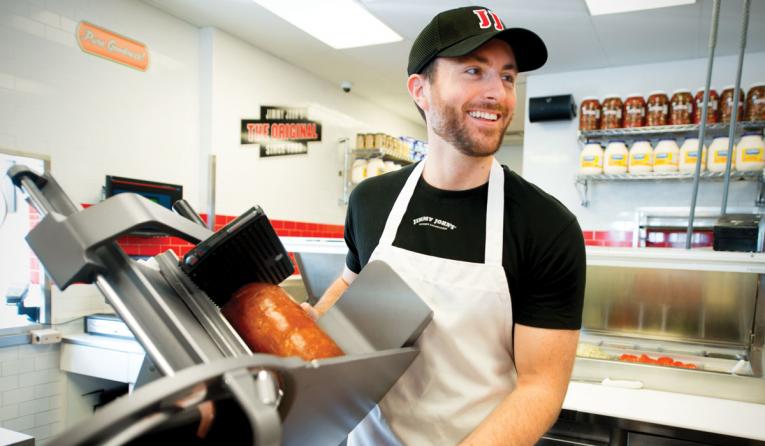 “It’s clear customers care about speed of delivery, cost, and quality, and we win on all of these," says John Shea, chief marketing officer at Jimmy John's.

“There are big gaps between consumer expectations and what they get,” Shea says. “It’s clear customers care about speed of delivery, cost, and quality, and we win on all of these.”

Like Jimmy John’s, Domino’s, too, has committed itself to in-house delivery, bypassing the surge of third-party delivery agents to leverage some 60 years of putting its pizzas directly into customers’ hands. Domino’s executive vice president of communications, legislative affairs, and investor relations Tim McIntyre says it is imperative that the Michigan-based brand control the service, quality, and safety around its product as opposed to relinquishing that oversight to a third-party agent.

“We want our customers to have the best experience possible, and that means making sure we have control of our product when it’s being made, put in the oven, and when it’s out on delivery,” McIntyre says, adding that maintaining in-house delivery also allows Domino’s to retain ownership of its delivery data rather than handing that valuable information off to an outsider capable of using it competitively.

To provide consistent and reliable service to its customers, and to do so in a cost-effective way that enables Domino’s to battle a growing set of competitors, Domino’s employs a fortressing strategy. Delivery zones max out at about nine minutes, and Domino’s has constructed additional stores to tighten up delivery areas and reduce drive times, moves that also improve the economics around the number of runs the chain’s delivery drivers can handle per hour.

“In some of the high-wage labor markets, it’s especially difficult to take $20 worth of food nine minutes away from your store and make money on that order,” McIntyre says.

But it’s not only the legacy players shunning third-party delivery in favor of their own delivery teams.

While growing fast-casual chain Dig (nee Dig Inn) had previously worked with a variety of third-party delivery partners, each carrying its own advantages and limitations, company leadership began investigating an in-house solution as delivery emerged as a bigger part of the business.

“It became clear that we needed to put significantly more intention into this part of the business than just putting a lid on the food and throwing it in a bag,” Dig founder and CEO Adam Eskin says. 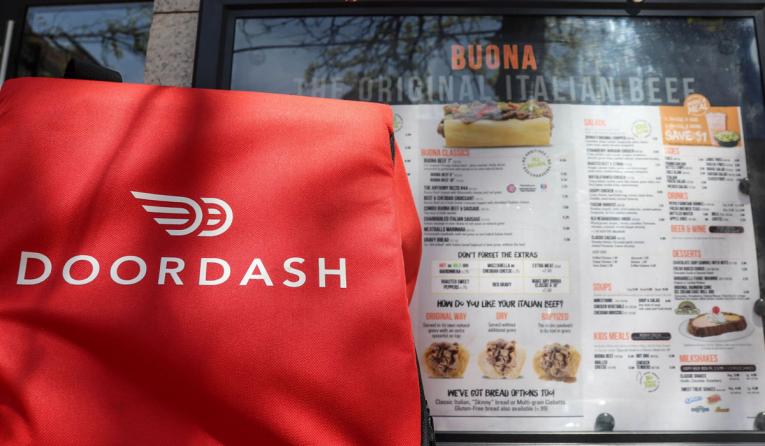 In July 2017, Buona launched a three-store trial run with DoorDash.

By designing a menu specifically for delivery, the 28-unit concept unshackled itself from its existing menu. This enabled the company to devote more R&D time to delivery-specific cooking techniques as opposed to retrofitting existing dishes for delivery. Eskin says the delivery menu has resulted in dishes that hit their peak of perfection not in the oven, but in the diner’s hands.

“We’ve carefully reviewed and developed each component of our new model—from culinary engineering to the physical logistics required to actually get food to your home,” Eskin says. “It’s not easy, but we’re excited to come to this finished product we’re proud of and we feel reflects our priorities at Dig.”

Such a focused effort, however, carried a hefty price: more than two years of consistent R&D work.

In that corner: Third-party services

For those without established in-house delivery programs or the stomach to build one, third-party delivery has presented a gateway to gain customers and bolster brand recognition.

Back in the 1990s, Buona, a family-run operation in suburban Chicago, experimented with in-house delivery. The results were mixed, but, more to the point, the company’s initial foray into delivery pulled its focus away from its core operation and the in-store customer experience, Buona vice president of operations Don Buonavolanto says.

With the rise of third-party delivery in recent years, however, the now-25-unit concept elected to give delivery another shot. In July 2017, the chain launched a three-store trial run with DoorDash.

“The delivery service model started to really develop and became a great sales-building opportunity, especially since some partners could provide the same service across all of our units,” Buonavolanto says.

With solid results from the three-store test, Buona implemented DoorDash system-wide in November 2017, and the company now partners with Uber Eats and Grubhub as well. Working with third-party delivery services has enabled Buona to reach new customers and offer delivery throughout its business hours while escaping the liability of an in-house delivery fleet or burdening in-store operations, especially since delivery is largely viewed—and handled akin to—the restaurant’s carryout and drive-thru business.

“The biggest drawback is the fact that you lose control of the order and the service provided once the order leaves your location,” Buonavolanto says. 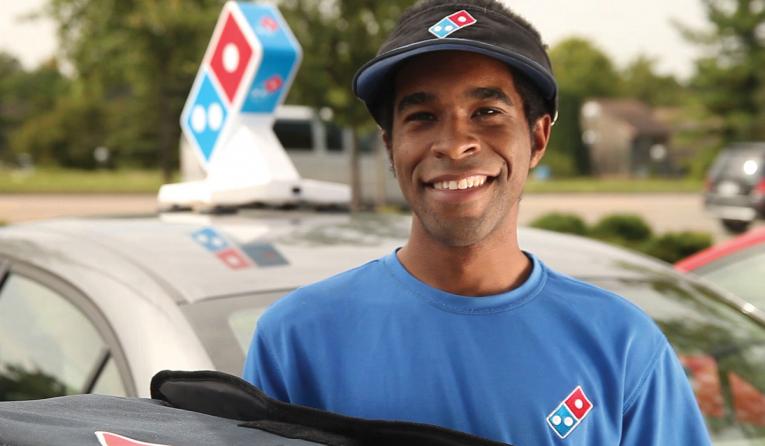 Domino's has been steady in its stance against third party.

Just Salad, a New York City–based chain closing in on 40 U.S. units, has been working with Grubhub on delivery since the opening of its first location in 2006. Just Salad founder and CEO Nick Kenner calls Grubhub a “powerful medium” for the burgeoning brand. Whereas in-house delivery—a service Just Salad has also maintained since day one—primarily targets existing guests, Grubhub provides valuable exposure to a captive new audience.

“We’re also able to work with Grubhub to build new diner campaigns targeting those who haven’t been to Just Salad before,” he says.

“We obviously prefer that guests order through our channels and cut out the middleman,” he says.

Reflecting on the results, however, Kenner still sees a clear, unquestioned benefit that pushes his continued involvement with Grubhub, especially with Just Salad’s average delivery times in New York City sitting under 35 minutes. “There’s no doubt that third-party delivery has a net positive impact on our business,” Kenner says.

In May 2018, The Habit Burger Grill, a 240-unit chain with restaurants across 11 states, began working with Postmates in northern California. A year later, the fast-casual chain expanded its partnership with Postmates to include the entire Habit system, propelled by Postmates’ strength in the geographical areas of Habit restaurants.

Combined with The Habit’s existing relationship with DoorDash, the system-wide expansion with Postmates has enabled the brand to provide the convenience today’s consumers are especially craving, says Charlotte Lucich, director of brand marketing.

“We are living in a time where convenience is everything,” she says. “Guests want to access brands in a way that is most convenient for them, whether it is going into a restaurant, using their drive thru, calling in an order or ordering online and picking up, or ordering through a third-party delivery company. Partnering with third-party delivery companies such as Postmates and DoorDash enables The Habit to be available for our fans on their terms.”

That convenience, though, comes at a cost, Lucich says—namely the service fees and commissions. As third-party providers can gobble upward of 30 percent of each order, restaurants need to determine ways to make third-party delivery profitable for them, which might include additional surcharges or higher menu prices for third-party delivery orders.

Lucich says The Habit has “found an equation” that allows it to offset delivery costs while maintaining the value proposition for guests, while Just Salad’s Kenner says his operation maintains margins by charging a delivery fee that covers most, if not all, of its delivery costs.