What is the Inflationary Tipping Point for Fast Food?

How much price is too much for customers? New data offers an answer.

Consumer Trends | September 23, 2022 | Danny Klein
Chipotle
Chipotle could be in line for a boost next year thanks to improving chicken supply.

A question on the minds of restaurant operators as inflation holds to four-decade highs, is where the ceiling might be. Is there a tipping point? Revenue Management Solutions analyzed in-store price increases by percentages, year-over-year (Q2 2021 versus Q2 2022) across 25,000 quick-service locations in the U.S., comprising of eight brands primarily in the chicken, burger, and Tex-Mex/Mexican segments, to see if it could find one.

With overall menu prices up 8 percent in August over the past year (7.2 percent for counter-serves), RMS was looking for if—or at what percentage—price increases had a diminishing effect, ultimately hurting traffic and negating some/all of the additional net sales recorded in recent months thanks, in large part, to higher prices.

And a clear point emerged. Mark Kuperman, chief operating officer at RMS, says net sales hit the highest threshold at about 13 percent. Beyond, traffic was so negatively impacted by the implemented price increase that net sales began to decline. Interestingly, throughout the restaurants included, the largest share of locations increased prices by an average of 9–10 percent. 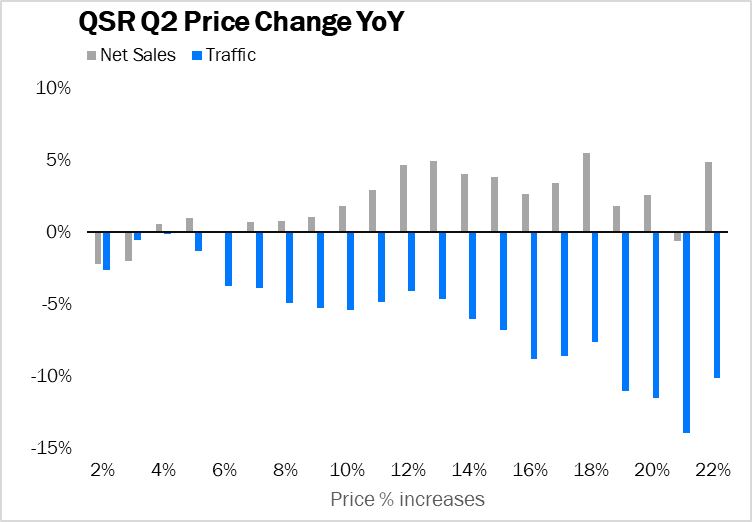 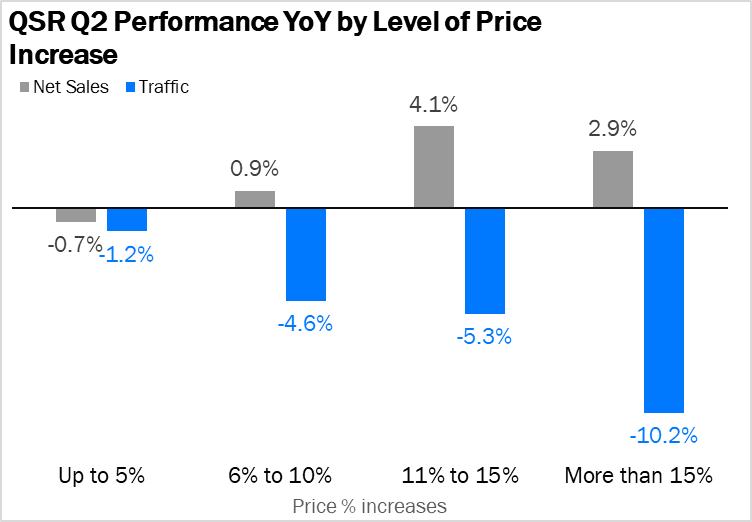 All told, as a reaction, should quick-service restaurants scramble for a pricing round? “Not necessarily,” Kuperman says. “Factors such as customer type, location, price by item, magnitude and timing of recent pricing rounds all weigh into the price sensitivity equation. Traffic declines start at about 6 percent indicating brands may lose customers before hitting the sweet spot of 13 percent. The key is a careful analysis by location either through RMS or internally.”

The State of Restaurants: Demand, Price, and a Race for Loyalty

Inflation Sends Restaurant Customers on a Hunt for Value

To Kuperman’s latter point, there aren’t many brands left not taking price. Necessity has evolved into strategy. “Average check analysis, customer type, location, price by item, common ‘bundles,’ magnitude, and timing of recent pricing rounds,” he says of the data operators should deploy in doing so. “For example, on bundles, if a brand takes price on items frequently bought together [think coffee, breakfast sandwich and a side], the customer is likely to notice the total check increase even if each item had a relatively small incremental price increase. On timing/magnitude, if a brand didn’t take price throughout lockdown, for instance, but now takes a 9 percent increase, the customer will notice, even if the 9 increase falls into the ‘acceptable’ window noted in the analysis.”

While RMS was able to uncover a tipping point, it doesn’t exactly paint a picture of what’s coming next. There’s been a clear and evident value push among chains of late as they work to keep the lower-income consumer engaged. And much of it has flowed through rewards and loyalty, with deals being offered in exchange for app signups and the continual data tradeoff. Deals such as Burger King’s June free onion rings with $1 purchase, available for Royal Perks members. Likewise, McDonald’s on September 18 touted a free Double Cheeseburger with $1 purchase on its app.

Arby’s recently launched a 2 for $7 Everyday Value menu, suggesting the bar on these value bundles could climb as price gets redefined.

Either way, it’s hard to say just how much higher this will go. “This is difficult to predict,” Kuperman says. “Some brands have still pricing opportunities beyond the 13 percent, while others already have limited opportunities even in the higher single-digits. What we can say, based on our analysis of observations across the industry, is that if year-over-year price increases beyond 13 percent, traffic is so negatively impacted that additional net sales begin to decline. We saw a significant drop in performance with price increases of more than 15 percent. Net sales were up 2.9 percent in the ‘more than 15 percent’ category, but traffic declined by 10.2 percent.”

Kuperman believes quick-serves are preparing for a new value era. More than just what channel it comes through as well, but also how it’s packaged. “In our observations, brands are looking at ‘abundant value’ items such as value bundles. They are also looking at price-pointing a la carte options, although at higher prices than we have seen in the past—we don’t think we’ll ever see 59-cent cheeseburgers again, for example,” he says. “Many brands are being creative with what they put on price-pointed a la carte menus, meaning they are creating new menu items specifically for this purpose using ingredients/labor that are more profitable than simply lowering the price of existing core menu items.”

Consumer surveys suggest diners are adjusting habits to inflation. Per Bluedot data, 91 percent of respondents said they’ve recognized pricing increases at restaurants and 73 percent said they’re tapping value menus more often in kind. Half said they were cutting back on visits to sit-down restaurants, while 47 percent said the same of coffee concepts, and 43 percent of fast casual. The number was 46 percent for fast food. Another 37 percent noted they were ordering less expensive items and 32 percent were simply ordering fewer of them.

Yet broadly, the industry’s net sales in August, according to RMS, was 5.2 percent, year-over-year, even as traffic declined 4.4 percent. Check was 10.1 percent higher in August.

Black Box Intelligence found similar baselines, with same-store sales up 5.3 percent last month (the strongest figure since March) alongside a traffic dip of 1.9 percent—the sixth consecutive month in the red.

Rewards Network data showed restaurant sales industrywide were up 17 percent in August compared to 2019. Again, a result largely driven by the fact average ticket was 26 percent higher. Traffic was 7 percent under. 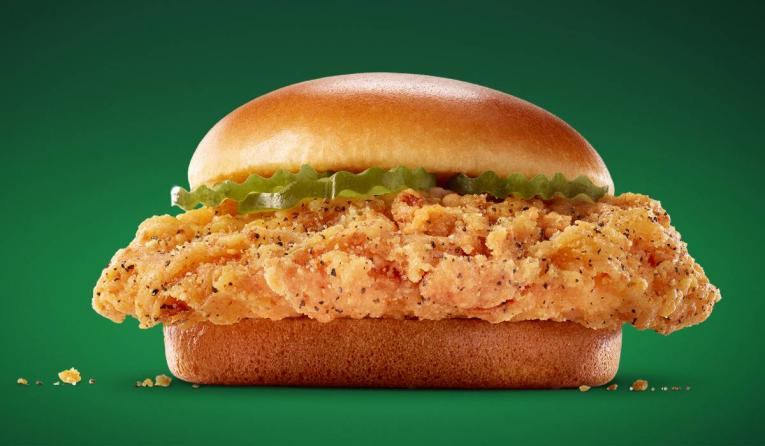 Wingstop's chicken sandwich erupted out of the gates, selling more than a million in six days.

BTIG analyst Peter Saleh recently held a call with Robert Wright, an independent consultant with more than 30 years of experience in the poultry and beef industries. There are a bevy of factors driving inflation, but commodity instability has surely been a lead one.

Wright had some interesting takes on chicken and beef, and why the categories might pull in different directions as the year progresses.

Firstly, Wright feels this summer’s drought across the southern and western U.S. led many cattle ranchers to sell their herd for slaughter early. It’s a dynamic that created an artificial over-supply of beef on the market, Wright said. It also helped keep a lid on the price of some steaks and other beef cuts over the past several months.

Yet Wright expects this to reverse course in December with the onset of colder weather and for prices to push about 15 percent higher in 2023 given fewer cattle for slaughter. Steak prices will bear the brunt of the increase (ground beef not as much). With that said, though, Wright noted one of the few cases for softer prices next year would be a result of significant demand destruction from a recession and/or reduction in consumer income.

Wright said prices will rise in 2024 as well once ranchers hold back cattle to increase herd size before moderating in 2025 as the increase materializes.

There’s a more apparent case for deflation on the chicken side, however. Wright projected an increase in poultry supply would lead to lower prices in 2023. He added the industry appears to have solved an egg fertility issue that weighed on production the past two years. Chick placements, he said, increased to 185–190 million per week from 175 million previously. Greater supply should translate into lower prices beginning in Q1 2023, Wright said, followed by normal price seasonality in the spring and a sharp decline next fall. The only potential roadblock would he a spread of Avian Flu (there’s some evidence of this in Canada).

“We believe the potential for higher beef prices in 2023 and again in 2024 will have broad implications across our sector from quick-service operators to higher-end distributors,” Saleh wrote in a note, highlighting Texas Roadhouse as a brand to watch. The casual chain typically doesn’t raise menu prices to fully offset commodity inflation near-term—a traffic-shielding approach that’s worked in the past. Its cost of sales ran about 200 basis points higher this year compared to 2022, despite roughly 10 percent of price over the past two years, Saleh pointed out. “We expect the elevated cost of sales to continue into 2023, with margins under pressure until beef prices moderate from these record levels,” he said. “We expect the company to continue to raise menu prices to offset higher labor costs, but believe they are unlikely to raise menu prices to offset rising steak prices as well. “

Indeed, Texas Roadhouse execs said in Q3 management expected beef prices to soften in the back half of the year before accelerating again into 2023. “This call confirms that this dynamic is well underway,” Saleh said.

On the flip side, he views Wright’s forecast as a friendly one for Wingstop. And it’s underway already, too. Bone-in wing prices declined substantially from more than $3 per pound last year to under $1.50 per pound recently. Wingstop noted it expects about an 800-basis point improvement in franchisee restaurant margins in the second half of 2022 versus the back end of 2021, thanks to lower wing costs. “Given the dramatic decline in wing prices so far in 2022, we don't expect additional price deflation in 2023,” Saleh said. “However, we believe the increase in supply associated with improved fertility should keep prices from migrating much higher, and in-turn, continue to benefit Wingstop at least through the first half of 2023. We believe this dynamic could allow Wingstop to ease off on additional menu price hikes, as margins will expand regardless.”

Chipotle is another brand Saleh said will appreciate the windfall. Chicken represents some 60 percent of entrée sales at the brand and about 20 percent of food costs (the company purchases naturally raised chicken whose market dynamics tend to differ from conventional chicken). The brand’s cost of sales in Q2 2022 was 30.4 percent, flat to last year and the lowest level in nearly a decade despite record inflation in Chipotle’s commodity basket.

“We believe that any deflation in the company's commodity basket would flow through immediately to the bottom line, as the brand is unlikely to roll back menu pricing or discount its product,” Saleh said

In Search of the Perfect Drive-Thru Restaurant
What’s Next for the Fast-Food Drive-Thru Menuboard?
Jim 'N Nick's Puts Hospitality First During Move to Quick Service

Taco Bell’s Gravity-Defying Restaurant is the Future of Fast Food
The 2022 QSR® Drive-Thru Report
What is the Inflationary Tipping Point for Fast Food?

Mobile Ordering Blurs the Restaurant Lines Even Further
The State of Restaurants: Demand, Price, and a Race for Loyalty
The ROI of ESG for Restaurant Brands