Biscuit Belly Plots its Rise in the Breakfast Category

Web Exclusives | November 13, 2020 | Ben Coley
Biscuit Belly
Early into the pandemic, Biscuit Belly swiftly pivoted to delivery and takeout in a state that didn’t allow indoor dining until late May.

Chad Coulter jokes that it’s the common progression for a pharmacist to get out of pharmacy.

His journey took him to franchising paint-and-sip locations with his wife, Lauren, to opening wine bar LouVino, which now has five locations.

Those moves in turn sparked a new adventure.

Since the opening of LouVino, Coulter and Tavis Rockwell, his executive chef and culinary director, toyed with the idea of opening a biscuit concept. Along for the ride was industry veteran Chuck Schnatter, who saw the growth of Papa John’s from its first store in the back of Mick’s Lounge to the more than 4,000 locations the chain had when he left in 2010. He’s also the younger brother of Papa John's founder John Schnatter

It seemed like a logical next step in Coulter’s progression, given that he’s a Georgia native who grew up eating scratch-made biscuits.

“After opening the first location, I'm seeing the success that it was,” Coulter says. “We really wanted to expand and open location number two and three in Louisville and then thought with the unit economics—at least before COVID—that it was really a brand that could succeed in the franchising world.”

Early into the pandemic, Biscuit Belly swiftly pivoted to delivery and takeout in a state that didn’t allow indoor dining until late May. But that wasn’t the only challenge facing the brand.

Louisville’s tourism took a significant hit. The Kentucky Derby, which has a $400 million economic impact on the region, didn’t have spectators. The annual Ironman Louisville was canceled as well as several outdoor music festivals. Tourism related to the city’s bourbon industry fell sharply, as well. All of those external factors have been mixed with the pandemic’s critical effects to the breakfast segment, with more consumers working from home and losing their morning routine.

However, as Schnatter points out, during the worst of the COVID pandemic, Biscuit Belly remained open in a state that “was probably as close to being locked down as any other state in the country.” He assures that the company is still doing well, and improving each week. Bright times are ahead, according to Schnatter, and so are the opportunities. He’s confident that the industry will come out on the other side in the next 12 to 18 months after vaccines and therapies are rolled out.

That’s why Coulter and Schnatter both believe now is the right time for Biscuit Belly to launch its first-ever franchise strategy.

“This is not a six-month run. This is a 10 or 15-year plan,” Schnatter said. “So right now we're seeing, unfortunately for so many people, the number of restaurants and other retail businesses that have shut down, and a lot of those are not going to reopen. So there’s an incredible amount of real estate that's going to become available and has become available, and I think that also this is the time when you go to these step changes in society. People start to make decisions about what they want to do with their lives long-term. You get a lot of people that have a lot of business and retail experience that maybe work for a bigger company that some of them are getting a buyout, laid off. We've got a concept that has legs.”

Coulter says the goal is to have 20 to 25 units signed up by the end of 2021. The growing chain is targeting the Midwest, Southeast, and East Coast. Additionally, despite delays in construction and zoning, Biscuit Belly plans to double its footprint with three more stores next year. 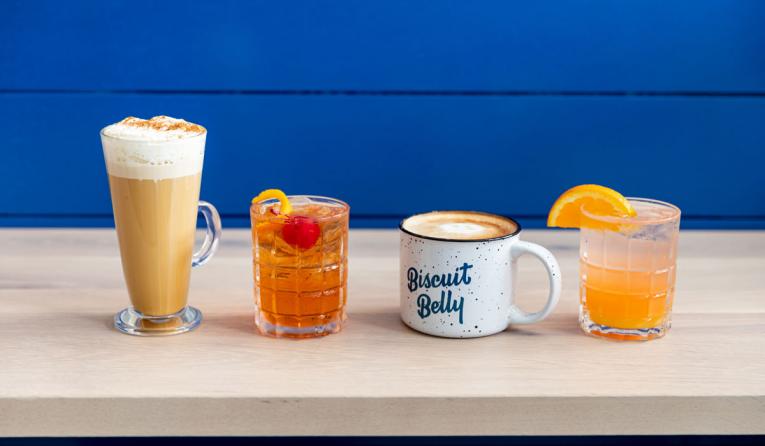 Biscuit Belly boasts check average of $24 and stores that close at 3 p.m.

The brand prepared for this strategy during the pandemic. Coulter says that during the slower periods, Biscuit Belly focused on getting its operations and systems online for growth. It also hired a consulting group out of Miami to help make its store footprint more efficient moving forward, including the construction of a new drive-thru model.

The founder notes that many quick-service and fast-casual brands are opening mobile order only locations, but he adds that Biscuit Belly won’t go to that extreme because the brand still feels the atmosphere needs to be enjoyed in-person.

“We're going to experiment with a very limited menu board and drive-thru concept that could be used for ordering right then and there and picking it up in the window and also ordering ahead on an app that we've just created, or online,” Coulter says. “And it could be just used as essentially a pickup window. So we're trying to do a hybrid model there. And once we get back to normal, if you will, hopefully by middle to end of next year, we'll be able to get back to a sales volume where we were pre-COVID as well have that new revenue source.”

With an average ticket price of $24 and stores that close at 3 p.m., the business duo is more than convinced of the concept’s attractiveness.

But as Schnatter phrases it, he’s seen the “good, bad, and ugly” of franchising. He says “selling a franchise” isn’t quite accurate—it’s more like a mutual contract. And like any other relationship, when you pick the right people who are dedicated to making the right things happen, sales and growth will surely follow.

The key will be monitoring growth one store at a time.

“We need to make sure we get the first 10 or 20 right,” Schnatter says. “My experience has been, throughout the foodservice world, is if you have a great concept with great unit economics, and people are making money, then the people who you want will come find us. The first 10 or 15 or 20 are the hard ones, but once you prove out the model, the foodservice ecosystem is pretty well connected. And people that are in another concept start talking to each other and say, ‘Hey, you know what? We've gotten into Biscuit Belly, things are really going well, we're making money, we really like the concept, like the products, like the people. That's when things really get exciting and the phone will start ringing.”