Big names like Le Pain Quotidien and Maison Kayser declared bankruptcy, each lamenting the overwhelming impact of the crisis. Specialty’s Café & Bakery, which had more than 50 stores, decided to permanently close after 33 years of business. Dallas-based Corner Bakery Café is reportedly seeking strategic alternatives as it fights the effects of the pandemic.

The same cannot be said for the South Florida-based CAO Bakery & Café, which believes it fits outside the mold. Tony Cao, a third-generation baker who leads production, quality control, and operations, says his team has “evolved and modernized the neighborhood bakery model into a mainstream, fast-casual concept.”

The change is within the name—CAO stands for Cuban American Original.

“I feel like we were able to take it to the next level and have a vision of creating Cuban-American,” Cao says. “We grew up here, so we have that Latin blood, but at the same time, we wanted to Americanize it and bring a nice atmosphere like when people go hang out at Starbucks and they plug in their phones and computers and they’re able to sit there and drink their coffees. It’s a lot more comfortable. A lot more seating. It’s a nice place to be. It’s very warm, very inviting.”

The concept was borne out of Vicky Bakery, a chain founded by Cao’s grandfather in 1972. Cao and his childhood friend, Carlos De Varona, opened and operated six Vicky Bakery units from 2010 to 2018.

While heading those stores, the duo kept the core bakery products, but added more to the café side to capture the lunch and dinner crowd. They enlisted the help of Chef Jeremiah Bullfrog, a television personality featured on Food Network’s “Chopped,” “Beat Bobby Flay,” and “Cutthroat Kitchen: The Truck Stops Here.” Cao says the food connoisseur helped give their sandwiches and wraps an American flavor.

CAO Bakery has since grown to 12 units across Miami-Dade and Broward counties, but it remains a family affair. De Varona handles construction, purchasing, human resources, and accounting while Tony’s wife, Yvette Cao, serves as head of marketing and advertising.

Before COVID, CAO Bakery had already formed third-party delivery partnerships. When the crisis arrived, the brand was 30 to 60 days away from launching online ordering, but COVID forced their hands, pushing the restaurant to move up the roll out to the beginning of March.

The pivot to off-premises was eased by the fact that CAO Bakery’s predecessor, Vicky Bakery, saw 80 to 90 percent of sales come outside the four walls and because most locations feature a pickup window. As a result, online ordering has more than doubled in the past six months.

"It was pretty easy for someone to order online if they didn’t want to wait for delivery to come get it,” De Varona says. “We can either bring it out to them or they can come up to the window and get it. So we really created that safeguard and gave the customer that feeling that it was safe to order from us.” 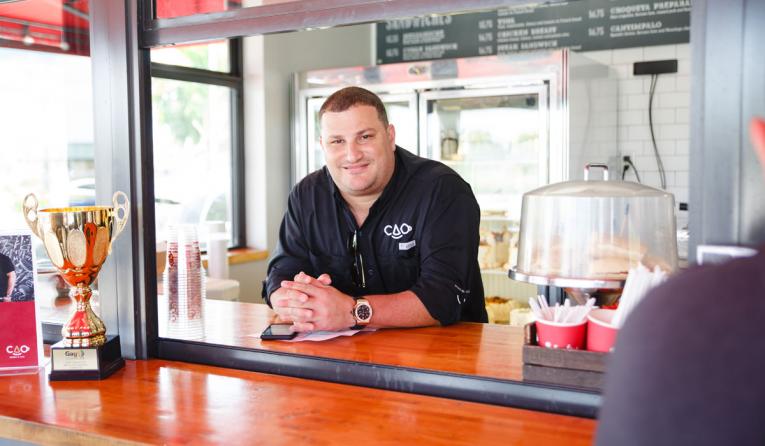 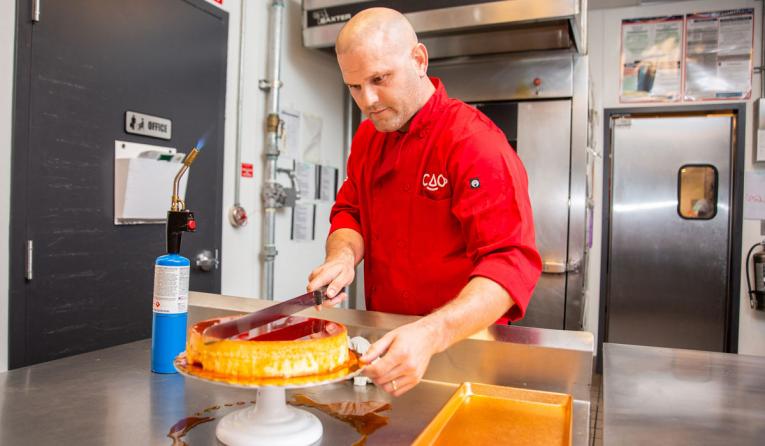 Tony Cao is a third-generation baker.

Miami has been one of the hardest hit areas in terms of COVID cases and deaths. According to Johns Hopkins University, more than 180,000 cases have been confirmed in Miami-Dade County, second only to Los-Angeles County. Of that amount, more than 3,500 have died. Miami closed dining rooms for a second time in July due to rising COVID cases and then eventually reopened in late August.

“The fact that we can have our tables and chairs out again, obviously it definitely helps. People want to get out,” De Varona says. “We do have outdoor seating, as well. They’re just tired of eating [at home]. The catering is going to pick up. It’s a part of the business that has lagged, but once that comes back, we’ll be back at 100 percent.”

CAO Bakery is leveraging the momentum to forge a new franchising growth initiative. It plans to open 10 locations in 2021 and 35 additional stores by 2024. The strategy is to target other areas in Florida with strong Cuban-American populations like Tampa, West Palm, Lake Worth, Gainesville, and Tallahassee. After that, the next phase will be to extend outside the Sunshine state into markets like New Jersey, Los Angeles, Louisville, Texas, North Carolina, and Tennessee.

A part of that development will be an emphasis on off-premises, including a drive-thru prototype that will soon open in Hallandale Beach, Florida.

“That’s a concept going forward that I’m very excited about,” Cao says. “It’s kind of like an express concept inside, a little less seating, but I think it’s going to be a great hit. It’s going to be one of our top sellers.”

Right now, Cao says the brand is focusing on second generation locations where the initial investment is almost halved. Every day, he’s sent three to four units that are completely built out and only require minor repairs to the front.

“There’s a lot of good opportunities right now. Unfortunate for others, but there’s a lot more opportunities for us,” Cao says. “… I think pricing is going a little bit down right now on commercial spaces because of the fact that a lot of things are closing down. You get a lot better deals at the moment. We were going toward this direction anyway. We have all of our systems in place. We’re organized and ready to go. In house, we have our team in place.”

The bakery-café category is a multi-billion-dollar segment with Panera as the lone leader, De Varona explains, meaning there’s room for CAO Bakery to take advantage.

After listening to its customer base, CAO Bakery feels there’s a genuine need and demand for its product outside of South Florida.

“We feel like 100 stores in Florida is easy,” De Varona says. “And then when you talk national, when you talk the rest of the U.S., there’s a lot of Latin communities. … It’s really endless.”