The 600-unit brand has continued to introduce new products and campaigns during COVID-19.

Tim Hackbardt rejoined Del Taco in early February. Within a month, the CMO—who first worked with Del Taco from 1999–2003—watched his role about-face as the greatest industry disruptor in a century arrived.

Yet this was actually a comfortable space for Hackbardt. He walked through Del Taco’s 600-unit doors with a comeback specialist reputation. As a consultant with BrandTrip Partners, he increased Rubio’s stock price 148 percent in 18 months and pushed strategy to accelerate BJ’s Restaurants’ 100 percent lift within 15 months. At Del Taco the first go-around, the company’s average-unit volumes jumped 33 percent within 48 months. Hackbardt also positioned four companies for future acquisition. In all, his restaurant resume stretched back 27 years, with additional stops at Pieology, Steak ‘n Shake, Johnny Rockets, and Lucille’s Smokehouse Bar-B-Que.

When COVID-19 pulled the curtains down, Hackbardt found himself in a parallel scenario. Del Taco wasn’t in crisis mode pre-virus (far from it), but like most, it was suddenly mired in one nonetheless.

And Hackbardt opened the playbook: “We parachute in, secure the perimeter, and ask, where’s the target?”’ he says. “That’s what you’ve got to do. You’ve got to pick your wins.

“The whole thing I’m always helping my team on is really, really focusing on what are the wins we can get here and how fast can we get them and how sustainable are those in the long-term. That’s what we should go focus on.”

What’s been truly unique to COVID times is the purgatory state restaurants find themselves in. Will restrictions loosen? Will they tighten again? The stop-start-stop nature of regulations and uncertainty—and an impending election to boot—have not only compressed innovation cycles, but kept them active day-to-day instead of quarter to quarter or even longer.

This became an interesting twist for a marketing guru. Del Taco transitioned its restaurant support center into a virtual office March 16. It guaranteed fiscal first and second quarter bonuses for GMs, maintained planned annual merit increases, and provided free meals for employees. It funded these changes through a series of cost-cutting measures, including voluntary salary reductions for VPs and above, thinned board member compensation, and by slicing all G&A expenses it could survive without. Open support center positions were deferred or eliminated and the company’s base staff took a small reduction.

Del Taco then deferred half of franchisees’ royalty payments for the first seven weeks of the crisis and waived 1.5 percent of the typical 4 percent systemwide market fee payment for eight weeks. Franchise subleased rent payments were deferred for six weeks as well.

By late July, 70 percent of franchise restaurants voluntarily repaid all of the royalty and sublease rents, with the rest on repayment programs to do so by year’s end.

In Q3, same-store sales charted into positive territory at 4.1 percent (2 percent at company-run stores and 6.5 percent at franchises). That after comp declines of 12.6 and 7.2 percent, respectively, in the previous period.

And so, early on, Hackbardt was working with significantly reduced marketing spend on a percent basis (a full suite of advertising and media returned in Q3). 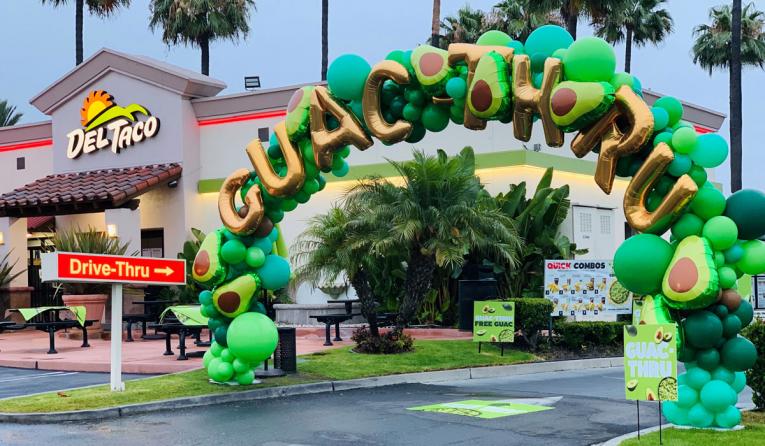 Del Taco went all in on social and one-to-one communication channels, either through open outlets, like Twitter, Facebook, etc., or via its app and email programs. Hackbardt says the approach was critical on multiple levels. Clearly, from a cost one. Also, it spoke to the core user, which during COVID rose in prominence as guests rotated and returned to brands they trust. There simply wasn’t as much discovery and variety chasing in the dining-out process.

CEO John Cappasola said in July Del Taco was “already seeing significant improvements in our consumer engagement across social and digital channels as a result of their early work over the past month [referring to Hackbardt and agency Skiver]. Our new approach that delivers must watch brand creative has increased social engagement and buzz by up to four times.”

An example: Del Taco launched a Sprite Poppers beverage—Sprite with mango or cherry-flavored popping boba—and saw a spike in user-generated video reviews and experiences across TikTok, YouTube, and other platforms.

Within a 10-week window, Del Taco brought fresh guacamole to the menu. It hosted a one-day “Guac-Thru” systemwide on July 24 where customers could bring any fast-food item to restaurants and top them with the new, fresh guacamole. Food influencers mashed up some classics, like Popeyes Chicken Sandwich, and shared them on social.

Del Taco then expanded its Epic Burrito lineup with Beyond Meat. Lastly, and perhaps most vividly, it added crispy chicken as a permanent protein with $1 Crispy Chicken Tacos and a $5 Crispy Chicken Burrito. The brand claimed to be the first Mexican quick-serve to feature the product as a core option.

On the marketing side, “CRYS///P TYGER” introduced Cholula Crispy Chicken Tacos on October 12. The “hair metal band,” complete with leopard sprint spandex, promises to be a branding chameleon for Del Taco as its Crispy Chicken menu evolves. The company wrote custom music and a custom song. This speaks back to the social sphere of COVID lockdowns and how Del Taco believes it can stand out from the pack.

Check out the campaign below.

The other thing Del Taco did was create a “Del’s Daily Smiler Summer” program to incentivize customers with offers and surprise deals from partners exclusive through its app. For instance, users received an offer for a free Samsung smartphone on what Del Taco labeled “Free Phone Friday.” It also partnered with Pandora at one point and RockMyRun as it observed a running craze born out of stay-at-home mandates. At the close of Q2, Del Taco’s app base grew to more than 1.1 million users—a 28 percent increase from the end of 2019.

“We follow those trends and had those types of offers,” Hackbardt says of the daily deals. “So it wasn’t just a price-off thing. It was something fun to add to your day and maybe to your new lifestyle. So we focused around those.”

Back in April, Del Taco laid the foundation for the rest of the year, possibly further. This included a refreshed value menu—Del’s Dollar Deal’s Menu, which features 13 items—as well as attention on the other side of the barbell, which is something Del Taco has always led the category with. In this case, extension of its Epic Burritos, touted as fast-casual size prices at 25–30 percent less.

Del Taco streamlined it to showcase four builds and put stock in fresh guacamole add-ons. Crispy Chicken moves across the barbell, too. There are two flavors, with habanero and ranch at the $1 end. It moves to the middle in a $4 Crispy Chicken and Fries Box, and up to top with the $5 Epic option that includes fresh guacamole and creamy avocado Caesar dressing.

Hackbardt says sales of Crispy Chicken, which officially landed in early August, are driving transactions and return visits. And the timing was actually ideal, pandemic or not, considering classic and comfort foods remained top-of-mind for guests throughout the crisis. 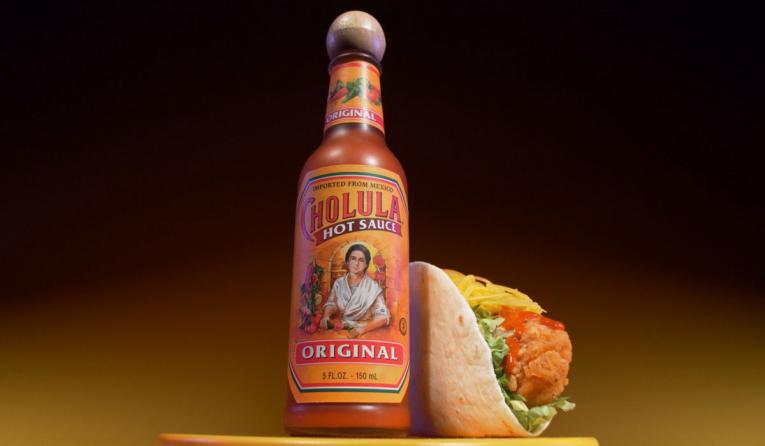 Despite what might become of the economy moving forward, near- to mid-term, Del Taco’s barbell approach remains versatile. “If that happens [a recession] and the customer really needs something affordable while they’re out, we’re a really great place for that,” Hackbardt says. “If that doesn’t happen and we have a really nice economic rebound, we’re really well positioned with that on that fresh side with our Epic Burritos and other products—for the fast-casual trade down.”

In terms of advanced store models to serve COVID trends, Hackbardt says he’s seen the dynamic unfold often over the years. Looking at the Great Recession, Starbucks jumped its drive-thru prevalence in an effort to capitalize on the 15–20 percent sales lift. It’s doing the same now as business shifts deeper into contactless. Chipotle is accelerating mobile-order ahead Chipotlanes. Countless other brands are adopting similar approaches and trying to position for a potentially friendlier commercial real estate market on the other side.

Del Taco hasn’t had to shift drive-thru focus like some others. Historically—prior to the introduction of delivery—drive thru and takeout accounted for more than 85 percent of the chain’s corporate sales.

The majority of franchisees adopted a similar approach. A narrowed focus led to improved service and labor efficiency. Cappasola said additional franchise interest in drive thrus emerged as a result, with an eye on increased real-estate availability and potential cost deflation. A fresh prototype is coming, too, with a modernized design, improved function, and other operations enhancements, he added.

Del Taco got creative by using cones to extend drive-thru queue line and deployed outside order takers, like In-N-Out and Chick-fil-A, where it had more challenged stacks. The goal being to get orders in quicker and accelerate throughput. Del Taco took some top-performing stores and shared training and kitchen efficiency best practices throughout the system. Cappasola called it bluntly, “a massive focus.”

With delivery, Del Taco devised “find delivery” stations inside kitchens so employees could locate key elements in one place. And it added information to stickers on orders to improve accuracy.

“There were a lot of brands innovating, but we, certainly and immediately, adapted as fast as we could,” Hackbardt says. “And we’re going to continue to do so.”