Tom & Chee, and the Comeback of a Shark Tank Legend

Can the once-promising fast casual return to franchise growth? Its new owner is banking on it.

Tom & Chee never lacked for buzz. Following its 2013 appearance on “Shark Tank,” the fast casual fielded some 9,000 inquiries from prospective franchisees. With each opening, the line got bigger. And so did the restaurants.

By the time the Cincinnati-based grilled-cheese franchise ballooned to 35 stores, prompting Forbes to call it one of the 10 best businesses to emerge from Shark Tank, restaurants were roughly 3,000 square feet and getting more complex by the day.

Roger David, president and CEO of parent company GSR Brands, shares an example. There were 10–15 sandwiches on Tom & Chee’s menu, plus a build-your-own option. Guests could order half a sandwich, a full one, or make it a double-decker. “Fifteen times three different kind of executions on just the sandwiches themselves,” he says. Each store also had five varieties of grilled-cheese doughnuts—Tom & Chee’s claim to fame—as well as three to five soups and daily specials.

Additionally, Tom & Chee, started by Trew Quackenbush and Corey Ward in 2009 as a 10-by-10-foot tent serving ice skaters in downtown Cincinnati, was a made-from-scratch concept that roasted its own meats. It sliced and cooled them before heating up per order.

“The consumer was paralyzed when they would look at the menu. They really didn’t know which way to turn. What to order. What to try,” David says.

But more notable were the operation and financial setbacks facing the category upstart. Tom & Chee inked a deal with Shark Barbara Corcoran to sell 30 percent of the chain for $600,000.

In November 2015, restaurants started to close. Three shut down in Columbus, Ohio. To start 2017, a restaurant in Indianapolis closed, followed by Detroit, Lexington, Louisville, and St. Louis.

Three years prior, Tom & Chee borrowed money to fuel what appeared to be bankable growth. However, financial setbacks from closures made it difficult to pay and the company’s assets were seized by the lender.

That’s when David’s Gold Star Chili, in the market for a growth vehicle, stepped in September 2017 and purchased the brand for an undisclosed figure. He was also an adviser late in Tom & Chee’s growth journey.

In all, the concept had become unprofitable, and lacked the infrastructure, model, and marketing/real estate chops of a successful franchise organization. Yet it had plenty of consumer appeal.

“This should be relatively easy to plug in and let’s try to give it a second life,” he adds. “And that’s what we did.” 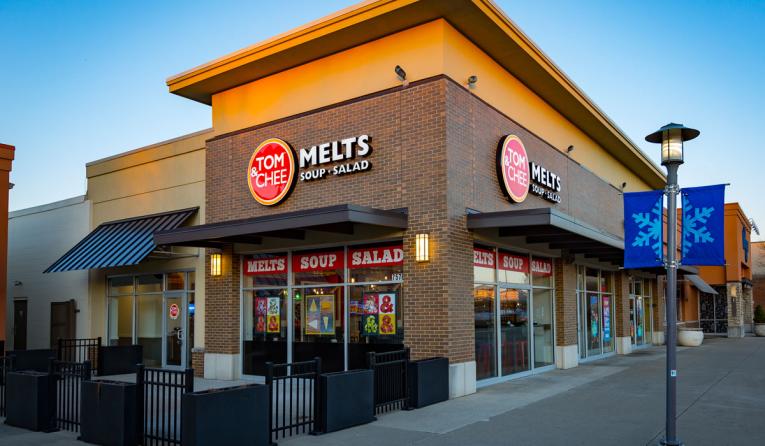 When Gold Star Chili, a 50-year-old family-run company, scooped up Tom & Chee, the concept was down to 23 locations. A Pittsburgh store in Q3 will bring the updated count to 11. GSR plans to ink an area development agreement with an Oklahoma City franchisee in the same period as well.

Expansion, though, will carry a very different feel than before.

At the onset of 2020, Tom & Chee unveiled a 2.0 model, which was the culmination of everything David and GSR envisioned, and also the company’s first corporate location since acquisition.

Center to the prototype, it boasted an extensive new cooking platform and footprint roughly 1,000 square feet smaller. GSR invested in high-speed ovens (moving away from steam shell grills). These combined two different types of heat—convection (can circulate air at 520 degrees) and induction. The latter heats a plate underneath sandwiches so Tom & Chee can crisp the bread.

Mainly, Tom & Chee can now cook a sandwich in about 90 seconds compared to the historical five to six minutes it took to make a grilled cheese.

Tom & Chee also sliced the menu 65 percent and designed an off-premises pickup area along with refreshed workstations for off-premises orders.

Branding changed, too. Tom & Chee removed the “+” that once separated its name and tried to age the concept a bit. Less bright colors in favor of muted, more sophisticated décor. The past version was a little too kid oriented, David said. “And it didn’t really align with the food we were serving,” he says.

Tom & Chee also pivoted from a “grilled-cheese” direction into a “melt” one to open the door for creativity between two slices of bread—and one that better fits a somewhat premium quick-serve price point (certain sandwiches are $7.99). One “handcrafted melt” is the Bacon Mac & Chee: mild Cheddar, Mozzarella, hearty white, homemade mac and cheese, and Applewood smoked bacon.

Before the arrival of COVID-19, David says the new store “was just crushing it.”

It was nailing a 2–1 ratio on sales to investment and accomplishing the top aim for GSR—improve restaurant-level ROI to create a more compelling model for franchisees to buy into.

David says COVID has been a “punch in the gut,” and Tom & Chee has struggled like any fast casual without the safety blanket of a drive thru.

As a company, leaning on Gold Star Chili and its 70 or so locations, GSR’s sales were up 9.7 percent, year-over-year, before lockdowns began. From March 15 through the month of April, the figure dropped to negative 0.5 percent. Tom & Chee lost about 50 percent of its sales, David says. It’s cut that in half thanks to added catering, delivery, and carryout.

And from March 4 through June 21, GSR says its bounced back overall (with both concepts included) and is now surpassing last year’s sales by 6.6 percent.

David is feeling optimistic about Tom & Chee. Like many people in the industry, David believes COVID could ignite franchise interest throughout the restaurant sector. People who have felt limited or helpless in recent months might look to ventures where they can take their careers by the reins. “We think there’s this desire that comes from experiences like we’re having now—where people want to control their destiny a little bit more,” he says. “So we do think that we’re going to get a lot of folks that are interested in talking about owning their own business.”

There’s also the potential of a pandemic shakeout, and how that could open growth for well-capitalized companies. Lower barriers to entry. More prime real estate and conversions to choose from.

“Hopefully we can bring a little bit of grounding or certainty to somebody’s life,” he said.

David has experience in turnarounds, and he’s also GSR’s first legacy CEO. David’s father, Charlie, was one of the original Daoud brothers (along with Dave, Frank, and Basheer) who founded the company out of a Hamburger Heaven five decades ago. They ran the company for 25 years before tapping CEOs with outside experience to direct the next two-and-half decades.

David worked at Gold Star for 10 years after college before shifting into other endeavors. Most notably, he spent five years as CEO of full-service brand Buffalo Wings & Rings. There, he led a comeback project that saw the grill chain’s average-unit volumes nearly triple.

He oversaw a branding effort at Gold Star as well. The chain’s new “G5” prototype took shape at its Springdale, Ohio, location in Q1. Five more are expected this coming quarter and 13 for the year.

David also helped consult Lowe’s Home Improvement as it was differentiating itself from Home Depot.

Separating from the crowd isn’t something David worries about with Tom & Chee. He compared a few large sandwich chains and says, a “lot of them have a lot of similarity between the two. Well, here’s a sandwich that’s uniquely different [at Tom & Chee]. That’s why we liked the space.”

“As I went around and visited with all the franchisees and talked to customers, there was so much passion for the brand,” he adds. “I know that word is probably overplayed. But when you speak with those customers and they tell you what they love and how often they come here and how it makes them feel, and you speak with the franchisees grinding it out on a daily basis, you can tell they really believe in the concept.”