Will a Focus on Innovation Push Pizza Hut Back to No. 1?

Pizza Hut continues to build for the future.

The big news coming out of Pizza Hut these days is the closing of up to 500 U.S. stores, many of them dine-in, over the next 24 months as the chain sharpens its focus on delivery and carryout operations. The announcement made by parent company Yum! Brands, Inc. during its July Q2 fiscal 2019 earnings call was met with mixed reactions—mostly from consumers. Even celebrity influencer queen Chrissy Teigen weighed in, tweeting “long live the hut” while bemoaning the closings.

WHERE THE PIZZA CHAINS STACK UP IN 2019

Industry watchers, though, were hardly surprised. Shuttering low-volume dine-in stores in favor of more delivery and carry-out-friendly units is simply Pizza Hut’s latest move in a quest to regain the market share its lost over the past decade. Sales at top competitor Domino’s surpassed Pizza Hut for the first time in 2017 leaving Pizza Hut in the unfamiliar No. 2 spot among American pizza chains.

The retraction would drop Pizza Hut’s U.S. store count to as low as 7,000 as it reworks its fleet. The brand closed Q2 with 7,449 restaurants. About 6,100 of those are traditional locations and 1,350 express stores. Half of the “traditional” spots are dine-in setups. Currently, 90 percent of Pizza Hut’s business is off-premises. U.S. and international locations see roughly seven and six point differentials between the off-premises and dine-in, respectively (dine-in representing the lagged mix).

The goal, though, Yum! said, is to replace the vast majority of these restaurants, not to go dark on the real estate. Some could move to more desirable trade areas. But during the transition, the chain will decelerate new unit development. International growth will be offset by a near-term decline in the absolute number of U.S. restaurants.

Pizza Hut is not going down without a fight. Instead the chain is betting millions on new technologies and programs intended to help it recapture the lion’s share of pizza dollars.

“We’re all about investing in innovation across the board at Pizza Hut,” says chief brand officer, Marianne Radley. “Whether it’s collaborating with our Plano-based friends at FedEx, working with Toyota to create a mobile pizza-making factory on wheels a reality, or dropping new menu items like the iconic Cheesy Bites Pizza, bold innovation has been in our DNA for decades.”

Yum!’s 2018 $200 million investment in Grubhub is one such bold move. Pizza Hut’s leadership team is counting on its 3 percent stake in the third-party delivery app and Grubhub board seat for Pizza Hut CEO Artie Starrs to help it navigate a changing consumer landscape where just about any restaurant—from fine-dining to fast-food—can now easily offer delivery. Systems integration testing began in February with orders placed through Grubhub delivered by Pizza Hut drivers.

Pizza Hut ended Q2 with more than 300 locations on GrubHub and plans to expand further. 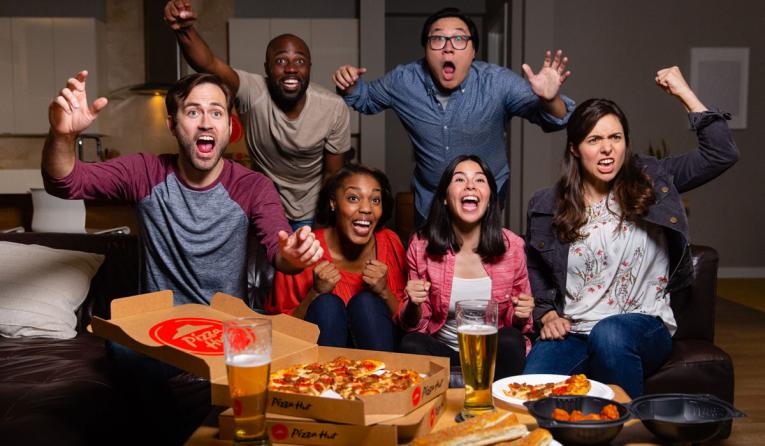 Beer and pizza just make sense. And it's working for Pizza Hut, too.

“The Grubhub partnership has been great,” Radley says. “As of now, we’re still in the pilot phase and don’t plan to expand to any other third-party delivery systems.”

Other tests and innovations are expanding, though. During Yum!’s most recent earnings call, leaders credited Pizza Hut’s two-year-old Hut Rewards loyalty program and new value menu with helping to drive an uptick in transactions. Hut Rewards was revamped in October 2018 to allow for points accumulation across all ordering platforms—online, phone, and in store. Pizza Hut also used the platform to tie into its multiyear marketing deal with the NFL by offering a Hut Rewards member-only discount on NFLShop.com Super Bowl LIII merchandise. The initial success of Pizza Hut’s $5 value-menu, launched fall 2018, led the way for an extended $5 ‘N Up Line Up menu. As of July 2019, Pizza Hut is offering up eight menu items at $5 each, including desserts, sides, and beverages.

Additionally, on the menu side, the brand updated its Original Pan Pizza for the first time in 40 years, replacing the sauce, cheese blend and baking pan in hopes of delivering a crispier crust. And, beer delivery to 300 locations across seven states continues.

“The combo of cold beer and pizza is an absolute no-brainer, and the response from customers so far is affirmation,” Radley says. “As the only pizza delivery company that can offer this, we’ll continue to lead the charge and are focused on expanding the beer delivery program.”

Pizza Hut categorizes such moves as a “holistic approach to creating a customer experience that no one else can provide like Pizza Hut.” What Pizza Hut is not doing, Radley says, is abandoning dine-in all together.

“We’re simply giving our customers what they want,” Radley says.  “... We know some of them look forward to sitting down in our restaurants and enjoying their pizza under the red roof. But we also know that many prefer the convenience of delivery or carrying out.” 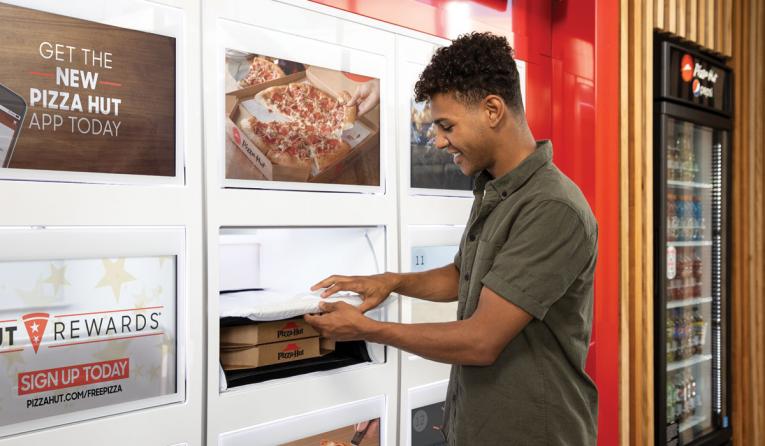 Pizza Hut is betting on delivery in its international markets, too. China and the U.K. remain two of its most robust dine-in markets, yet the company is enhancing off-premises options there as well. Seventy percent of European orders come in online or via app.

“As consumer preferences continue shifting, we’re constantly looking for ways to offer the best experience possible and strike a balance between dine-in, delivery and carryout,” Radley says. “We’ll never become complacent when it comes to the pizza-eating experience—regardless of how people prefer to dine with us.”

Radley has worked to build the newly formed consumer analytics and performance marketing teams at Pizza Hut. Knowledge from these teams are being used to not only inform operations, but also guide Pizza Hut’s anticipated $227 million ad spend. Austin-based GSD&M, the brand’s seventh agency in eight years, is leading that work.

“We’ve been working with GSD&M for a little over a year and are really excited about the partnership,” Radley says. “We’re all about being RED—relevant, easy, and distinct—and that approach is at the heart of the brief.”

Still it remains to be seen whether such moves are enough to put Pizza Hut back in the No. 1 spot. Worldwide sales grew 10 percent in the second quarter, primarily boosted by Pizza Hut’s alliance with Telepizza Group, the largest non-U.S. pizza delivery company worldwide. That deal doubled Pizza Hut’s footprint in Latin America and the Caribbean. Terms also include another 1,000-plus new Telepizza stores to open over the next 10 years in Spain, Portugal, Latin America (excluding Brazil), the Caribbean and Switzerland.

On the domestic front, however, Pizza Hut saw a 4 percent increase in system sales and a 2 percent increase in same-store comps in the second quarter. At that rate, the chain is looking at an overall increase of 1 percent in domestic sales for the year. Transactions upped 3 percent in Q2, which Yum! CEO Greg Creed credited to “the result of continued compelling value, ops execution, and our growing loyalty program, Hut Rewards.”

“We are America’s original pizza company, and we’re just as committed as we’ve always been to pushing the pizza category forward without forgetting where we’ve come from,” she says.