Is Panera Just Beginning to Reach its Potential?

Yet another aftershock of increased restaurant competition and digital intrusion appears to be the race for all-day visits. From Dunkin’ and Starbucks in the afternoon to Burger King at breakfast, brands are designing menus and models to drive transactions into lagging dayparts. The first reason is an obvious one—today's slower traffic trends require chains to court stickier consumers (especially considering guests are willing to spend more these days). The other is the reality that technology opened accessibility points in places they didn’t exist before.

Delivery, arguably the most prominent example, has allowed many lunch-heavy chains to surge dinner and late-night sales. Consider Krystal Burger as one case study. When you hear about delivery’s incremental effect, it’s often from this approach: It was a customer, or business, we weren’t getting before. So it’s probably more accurate to envision delivery sales as frequency filling a void rather than stacking up on peak orders. Of course, this changes by the chain, and much of that has to do with which daypart they already own. Also, the quality and awareness tied to the process.

One of the most vivid displays of this concerns 2,300-unit Panera Bread. First, in April, the fast casual relaunched its breakfast strategy to compete for a.m. guests, often considered the most loyal among younger consumers. This involved grinding coffee beans in house and putting the process on display, akin to top coffehouse rivals, and introducing expanded menu items as well as technology-fueled convenience.

It’s worth pointing out the backing of owner JAB Holding, which agreed to buy Panera for $7.5 billion in April 2017. JAB runs Peet’s Coffee, Caribou Coffee, Espresso House, Stumptown Coffee Roasters, and Jacobs Douwe Egberts. It also holds a roughly 71.5 percent stake in Keurig Dr Pepper (JAB owns Krispy Kreme as well). One of the first things the parties discussed, per reports at the time, was the branding of Panera’s coffee. Rather than simply agreeing to a licensing deal with one of its coffee giants, JAB encouraged Panera to lead with its own brand. To get there, Panera is giving coffee stations a makeover, launching cold brew, and rolling out a new line of hot coffee—a fresh light roast and a dark roast. The changes are expected to arrive by late summer.

Then, last month, Panera announced it was testing a dinner menu in Lexington, Kentucky, followed by another pilot in Providence, Rhode Island. It encompasses 10 new items available from 4:30–10 p.m. Chief growth and strategy office Dan Wegiel said Panera asked itself where it was going to get the most out of its value creation. Where would the brand—and the customer—be in 10 years? And if technology continues to accelerate, which it will, it’s likely the daypart discussion will blur even further. Convenience will extend from speed-focused to at-home demand to evergreen delivery. Guests want food when they want it, where they want it. Will brands be positioned to deliver that promise?

Placer.ai, a mobile location analytics platform, took a look at Panera’s foot traffic and compared it to other options to see if the proposed menu change can unlock all-day success.

Let’s start with the midday. The company analyzed Panera’s visits from June 2018 through June 2019. It found that Panera maintained steady performance, regardless of location. Apart from significant decreases on holidays, like the Fourth of July and Thanksgiving, Panera’s chart really didn’t fluctuate much.

Panera visits nationwide compared to the baseline for the period from June 1, 2018 to June 2019.

Panera recently said that more than 75 percent of its business takes place post-11 a.m. And that dinner accounts for roughly a quarter to a third of sales.

Placer.ai’s data fit into that claim, with 34.8 percent of all visits arriving between noon and 3 p.m.

Distribution of visits by hour of day.

Further data, though, hinted significant opportunity. Panera saw more than 25 percent of its daily traffic arrive between 8 a.m. and noon—more than three times that of Chipotle. Panera’s average visit duration was also 26.2 percent longer. The figures aren’t surprising given the menu differences between the brands. Chipotle is clearly a lunch/dinner spot.

But that’s essentially the point with Panera’s whitespace in fast casual. The chain has all the tools of a robust breakfast player yet appreciates 75 percent of its business outside the daypart.

Historically, the hurdle for Panera’s breakfast traffic was convenience related. Sara Burnett, Panera’s VP of wellness at food policy, said in April that Panera recognized “our guest is looking for new breakfast offerings in their busy lives.”

Visits to Panera (Blue) and Chipotle (Red) compared to their baseline for the period.

Then Panera decided to broaden its delivery focus, first kept to hours post-breakfast. Early delivery remained an option in test markets but has grown along with awareness and was up to 624 units when the new strategy launched. Panera also added a reorder function to its app, which allows guests to select their daily breakfast in a few clicks and have it waiting for them at the restaurant. Where delivery is available, customers can even order their “usual” breakfast order when they wake up and have it scheduled to meet them at the office. 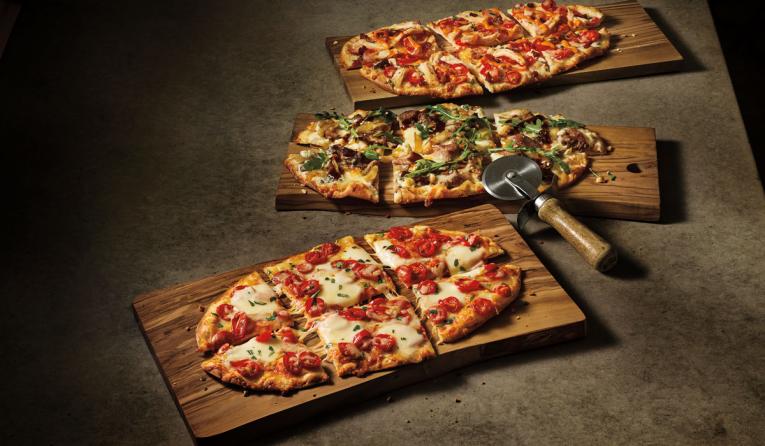 Panera's offerings are considered too light for some dinner guests. The new menu changes that.

Many of these options sound pretty similar to what larger coffeehouse players offer. Only Panera is barreling into a frontier that’s relatively unknown to its guests. At least for the time being. Change that dynamic and the runway is vast. When you also consider Placer.ai’s data, it shows there’s customer demand and trust in the offering at Panera. The chain didn’t have to reinvent the wheel with breakfast. Guests know it’s there. It was a matter of changing how they access it and incorporating those products into daily routines. And that goes a long way.

And there are tech systems aplenty to get there. There are 34 million or so people in the MyPanera platform. Panera gathered some 4.5 million users and generated 200 basis points of traffic growth from loyalty within a year of launching in 2010. Last year, the company said it was set to hit $2 billion in total digital sales by the end of 2018. The mix, which includes online, mobile, and kiosk orders, accounts for roughly 33 percent of Panera’s sales currently. It receives about 1.4 million digital orders per week, up from 1.2 million in 2017.

This lends optimism to the dinner chance, too. Placer.ai compared Panera to McDonald’s to see how this unfolds. McDonald’s witnesses a steady level of visits throughout the day from morning until evening. From 9 a.m. to 9 p.m., no single hour reports less than 4.9 percent of daily traffic or more than 9.4 percent. McDonald’s has long courted all-day guests, from all-day breakfast to late-night menus. That 70 percent incremental delivery figure you hear so often? McDonald’s is well positioned to serve occasions outside the restaurant during times when it doesn’t peak in traffic. It’s menu and drive-thru capabilities are designed for every daypart. 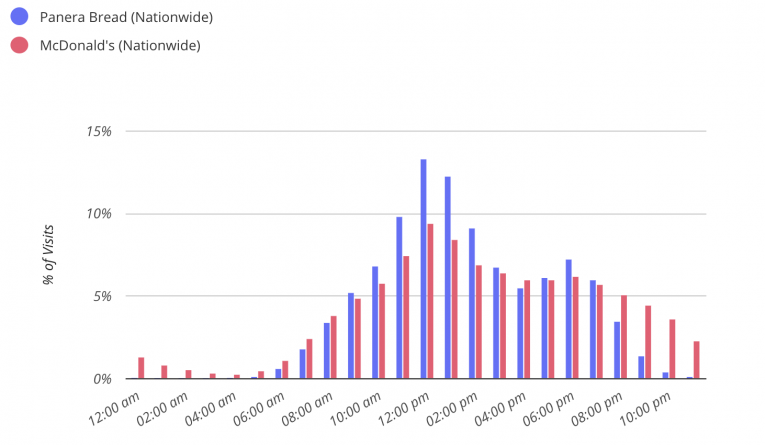 Percentage breakdown of Panera and McDonalds visits by hour of day.

Comparatively, Panera showed a lunchtime peak that rises to 13.4 percent of all traffic and a bottom of 3.5 percent in that same 9 to 9 slice.

Credit, again, McDonald’s diverse product line. That’s not unique to the industry giant—it’s one of the longstanding traits of fast food. What it proves more, though, is just how much potential Panera has to bring additional guests into underserved blocks of time.

Another way to look at it, as Wegiel said, “there’s probably a diminishing return of how many more lunch occasions we can get.” In other terms, Panera is plenty busy for lunch and is bumping against the ceiling. And delivery is probably not going to rewrite that business as we know it. But the ability to meet dinner and breakfast demand would provide Panera with the capacity to drive visits throughout the day, just like many of the most powerful quick-serves in the business.

Placer.ai believes it could go even further. Panera has an added weapon, the company said, because it could combine morning-to-night appeal with an average duration that beats out pure lunch/dinner offerings. It can become a place families want to go and stick around a while. It’s broad selection would extend Panera as a lunch destination into a morning, afternoon, and evening place for social gathering.

“The result is a brand that is demonstrating a unique capacity to not only drive visits but to continuously push the envelope to extend its reach,” the company said.