Portillo’s restaurants earn a level of sales volume that few can match, regardless of dining segment.

The success appears to grow with each new opening. Portillo’s first drive-thru-only location in Joliet, Illinois, exceeded expectations despite debuting in the “dead of winter,” Osanloo said. The chief executive also noted the St. Petersburg, Florida, restaurant (came online in April) may be the fast casual’s best opening ever.

“The consumer has been very, very strong for both of those,” Osanloo said during the company’s Q1 earnings call. “Joliet, as I think everyone knows, is a drive-thru-only concept for us. It's a triple lane drive-thru. And so it is a bit of a pilot and experiment, and it's been fantastic so far. So we think there's something there to this drive-thru-only concept. And then St. Pete, I feel like it's one of those where we did everything really well. It's in a great trade area. It is a beautiful restaurant. It reflects the local environment.”

Osanloo attributed recent performances to an aggressive training program and paying “at the very top of the market.” Labor costs increased to 27.7 percent in Q1, up from 26.5 percent last year—driven primarily by a 13 percent rise in hourly wage rates. The company expects to implement more pay hikes this year, but not to the extent it did last summer.

How Portillo’s is Redefining Success from the Inside Out

Portillo’s hourly turnover rate is 20 to 30 percentage points below the industry average. For perspective, Chipotle’s turnover rate skyrocketed to 194 percent in 2021, compared to 141 percent in the prior year. Meanwhile, Portillo’s remains in the low 100 percent range. The fast casual reached pre-COVID staffing levels during the first quarter.

“The key to our success, our algorithm when it comes to labor is take wage off the table as they come in and then provide fantastic culture, training, and development so that our turnover is lower than everybody else's in the industry,” Osanloo said. “That creates really great outcomes on labor.”

Osanloo didn’t have sales comparisons between fully staffed stores and those that are still behind, but he has seen upticks in guest satisfaction, order accuracy, and speed of service, which translates to better same-store sales and profitability. In March, the company achieved its highest order accuracy and customer satisfaction scores in the past 24 months.

“This is not an accident,” Osanloo said. “This has everything to do with the attention our managers and team members have been giving the overall guest experience.”

Along with improved pay, Portillo’s continues to increase labor productivity versus pre-pandemic levels. As an example, a typical restaurant uses an L-shaped production line in which the long part of the “L” is for sandwiches, burgers, hot dogs, and beef, while the short side is for assembling salads. Employees decided it would be more efficient to move the salad-making operation to the main part of the “L.” There was room in the back near the drive-thru lanes.

Because of this shift, restaurants are able to use two fewer people to make salads, and there’s been an uptick in the number of items per labor hour. It’s also more convenient for customers, who had to pick up burgers and salads in two separate places beforehand.

“It's early going,” Osanloo said. “We have some creative ideas on what to do with some of that space we vacated that we think will create further efficiencies for our business. But that's one example of real tangible savings.” 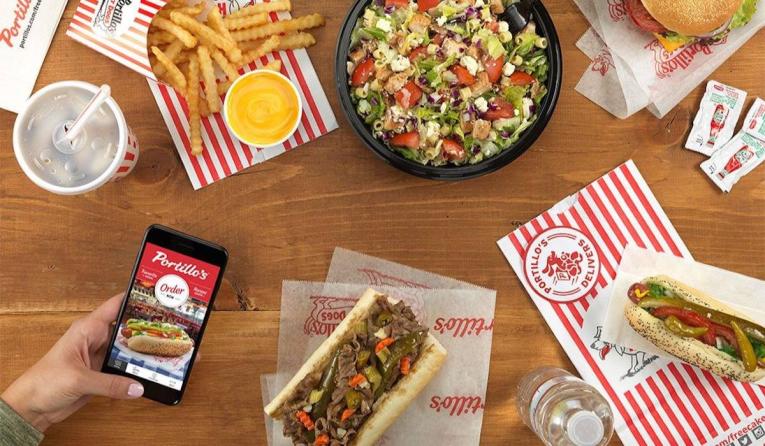 Portillo’s same-store sales increased 8.2 percent in Q1 year-over-year, driven mostly by a 7.5 percent lift in average check, offset by a 2.2 percent slide in traffic. The growth in average check was fueled by a 7.1 percent rise in menu prices. Portillo’s, which has yet to see resistance or elasticity to its pricing hikes, plans to take another increase in the second quarter.

In addition to rising labor costs, costs of goods sold rose to 34.4 percent, compared to 29.9 percent last year. There was a 15.7 percent average increase in commodity prices, with higher impacts in pork, chicken, and beef. Portillo’s previously projected 13-15 percent commodity inflation for 2022, and the company believes it will end up in the higher end of that range.

Portillo’s is limiting the magnitude of commodity inflation through fixed-price contracts. The chain is covered for more than half of its spend through the rest of 2022.

“When we look at the Q3, Q4 locks on those, you obviously weigh what the cost is of locking in at that, given certain prices,” said CFO Michelle Hook. “And so like I said, when opportunities arise, we're going to lock in. … I'm not going to lock ourselves into something now knowing that there could be opportunities in the future.”

“Because, as you know, when you look at forward projections, we do expect some easing,” she added. “And like we said, we know these pressures are more transient. So we're not locking into really longer-term numbers because we do think, as you look into '23 and '24 that, again, we would expect and hope to be some easing there.”

The chain’s same-store sales lifted 9.2 percent in January and 13.6 percent in February, but increased just 2.5 percent in March as the company lapped a 24.6 percent performance last year. Portillo’s chose not to share data from April, as it rolled over 34 percent comps from 2021. Although the chain is entering a tough stretch, it remains confident in same-store sales growth in the low single digits for 2022.

“At the end of the day, we're on track,” Osanloo said. “We're executing the playbook we shared with you during our IPO. We're confident in our long-term growth algorithm. The restaurant industry is cyclical. It's going to have its ups and downs, but we know how to manage our business for that.”

As of early May, Portillo’s had 71 locations in nine states. The chain's long-term goal is 600 restaurants.

In addition to its openings in Joliet, Illinois, and St. Petersburg, Florida, the fast casual is planning five more debuts in Gilbert and Tucson, Arizona; The Colony, Texas; Kissimmee, Florida; and Schererville, Indiana. If each store opens on schedule, Portillo’s will meet its 10 percent unit growth commitment. Nearly all of them will open in Q4, which Osanloo blamed on the slower-than-usual permitting process.

Total revenue increased 14.6 percent to $134.5 million in Q1. Restaurant-level adjusted EBITDA decreased $1.8 million to $28 million, and margins were 20.8 percent, down from 25.4 percent last year. The margin decline was due to commodity costs, and to a lesser extent, labor inflation.