As a category, pizza was one of the sector’s early pandemic strongholds. Guests sought comfort food and trusted brands, and, less holistically, a category with a history of delivery and carryout.

However, it’s a tailwind that’s begun to wrap around other issues. The most pressing being a staffing setback spiked by driver shortages.

Domino’s, long an outspoken critic of third-party delivery, recently suggested “nothing is off the table.” The chain lost enough operating hours due to staffing in Q1 to equate to the entire U.S. system being closed six days.

In early Q2, Pizza Hut also completed the integration of delivery as a service into its point-of-sale—a change that’s led to accelerated system adoption, Gibbs added, and Pizza Hut’s ability to leverage third-party aggregators to augment its own delivery fleet.

Additionally, Pizza Hut is expanding access to the brand via aggregator marketplaces.

CFO Chris Turner said Pizza Hut’s ability to fulfill demand is “the most pronounced challenged that we have from a labor perspective in the U.S."

“So that's part of the driver for continuing to shift to additional modes of being able to deliver,” he said. “And we're doing that by adding in both delivery as a service [rolling over the next two to three quarters], which is basically still having sales through our website and apps but then fulfillment, leveraging those third-party drivers during peak periods when we need extra capacity to help us address some of those hiring challenges for drivers.”

“But as we mentioned,” Turner added, “we're also working with the aggregator partners on the marketplaces. And that's just part of our strategy for wanting to be ubiquitous, be everywhere that our customers want to do business with us.”

Pizza Hut does have a case to build on. Turner said one of its leading franchisees already moved to aggregator platforms and ran about 4 points ahead of the system. It’s been primarily driven, he explained, by incremental customers the operator found through those marketplaces. “And of course, the way we negotiate the economics in those deals, in the U.S., we really are indifferent in terms of where the sales fall,” Turner said. “We ensure that our economics are roughly the same across channels.”

So, essentially, the franchisee mentioned is down low-single digits on year-over-year comps versus negative 6 percent systemwide. Turner said franchisees have a decision on how they want to work with aggregators under Yum!’s umbrella agreement. “Obviously, I think more and more are going to be choosing to move in that direction,” Turner said. “So the implementation will take a while but it's certainly part of the strategy for dealing with this really dynamic environment.”

It’s still too early to gauge what kind of mix layering third-party results in, he added, or how much delivery flows direct versus third-party. But, without debate, there’s a fulfillment challenge lagging the system. Pizza Hut’s carryout business was actually up in the quarter, Turner said. “And so, these strategies are directly pointed at that biggest root cause that's getting in the way of being able to serve and fulfill full customer demand,” he said.

Pizza Hut is also piloting its Dragontail platform in more than 100 U.S. stores. Yum! spent $93.5 million (Australian currency, or about $66.5 million in U.S.) to acquire the company last September. It’s an end-to-end AI-based solution that automates kitchen flow combined with the process of dispatching drivers. Restaurants sequence and time each order, while planning optimal delivery routes and adding delivery orders by location. The technology also offers consumer-facing capabilities for guests to track orders. Lastly, it can operate with outside food delivery partners.

Before the deal, which made Dragontail a wholly owned subsidiary of Yum!, the platform’s kitchen order management and delivery tech was deployed across nearly 1,500 Pizza Huts in more than 10 countries.

Alongside this, Gibbs said, Yum! will look to expand its HutBot and 360 Coach platforms.

The broader conversation around pizza giants taking to third-party isn’t likely to drop off. According to new federal data, 810,000 “accommodation and food services” employees quit in March. That was the highest figure since November 2021 (813,000), and well ahead of the year-over-year mark of 660,000. It was 796,000 in February. The sector also hired 1.011 million people, a sizable jump from 817,00 in February.

Those operators indicated about 82 percent of orders today are delivered in 35 minutes or less, substantially less than 93 percent historically. With that said, however, franchisees said the only common thread between underperforming units appeared to be GM tenure, not geography or location. Saleh said “franchisees complained about the driver shortage, which has resulted in much slower speed of service, and to a lesser extent a reduction in operation hours.”

Overall, however, the brand continues to post upward results. Its same-store sales in North America, announced Thursday morning, climbed 1.9 percent against a prior-year lap of 26.2 percent. Papa Johns also raised its outlook for fiscal 2022 net restaurant growth to 280–320 from 260–300 units.

But on the third-party topic in particular, franchisees said they were treading cautiously. Some said they had no choice but to tap in. A selection of operators reported third-party delivery was accounting for 6–7 percent of sales, while others put the figure closer to 15–16 percent. “The more pessimistic franchisees are reluctant to give up control and customer data of a significant portion of their business in fear of being held hostage in future contract [rate] negotiations if that channel grows meaningfully,” Saleh said.

Others said it was only a near-term alternative to mitigating the driver setback. Saleh added he’s heard carryout sales mix increased to 40 percent of sales from about 30 percent as delivery fees continue to climb and competitors advertise the channel. 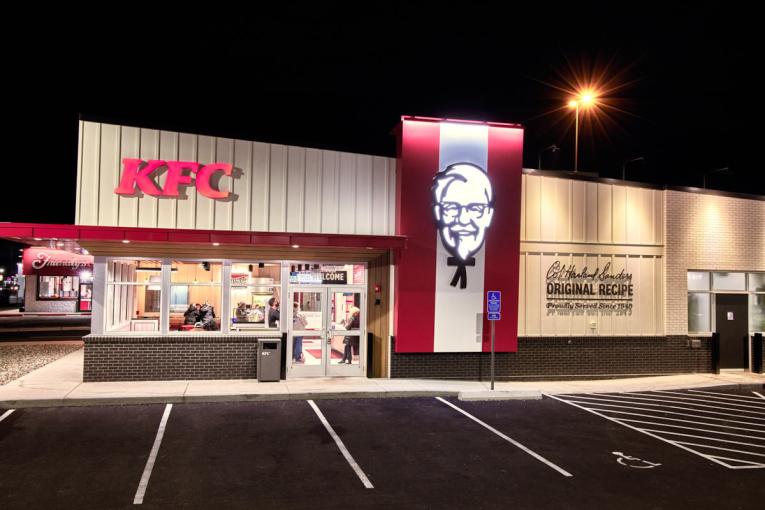 KFC’s stateside efforts in recent months have centered on convenience and off-premises-centric marketing, including the chain’s “Quick Pick-Up” shelves and white-label delivery. The former is fully deployed across the U.S. footprint and roughly a third of Habit Burger’s.

Gibbs added KFC’s Beyond Fried Chicken, featured in Q1, resulted in more media impressions than any other product launch in brand history.

Taco Bell leaned on value in Q1 by introducing $2 burritos to its new Cravings Value Menu, which focuses on box and combo offerings and joined the company’s existing $1 menu offering.

The Habit’s comps climbed 3 percent as it opened 13 gross new restaurants in the U.S. and Cambodia.

Overall, Gibbs said he believes the U.S. consumer is in good shape. Yet similar to comments shared by McDonald’s last week, there is extra care being taken with lower-income customers and making sure value is available at the entry point.

“But as far as the consumer and how's their behavior in this environment, some of the other things to think about are the fast-casual category has grown a lot,” Gibbs said. “We expect that if there's cutting back, that there'll be some trade down from fast casual back into [quick service], which will be favorable for us, particularly Taco Bell, which I think is well positioned to capture some of those visits.”

“But it all comes back to this theme of the [quick-service] industry is built on convenience and value,” he continued. “Convenience and value win in any environment, particularly when you couple it with our great brands and innovative products that we're constantly introducing.”

In regard to the Ukraine crisis, Gibbs said Yum! activated its Disaster Relief Fund to support Ukrainian franchise employees and is matching employee donations to organizations providing relief. The company noted earlier it would suspend all investment and development efforts in Russia, as well as operations of company-owned KFC restaurants. Also, it’s finalizing an agreement with its Pizza Hut master franchisee to suspend all restaurant operations.

Gibbs said Yum! has now begun a process aimed at transferring ownership to local operators while, in the interim, it continues to redirect profits from Russia operations to humanitarian aid. “This is not a decision we take lightly and I know that it will be a complicated process to execute these transactions,” Gibbs said.

Core operating profit decreased 5 percent in Q1, including a negative impact from Russia of 1 percent.