Inside the Evolution of Tim Hortons

Digital engagement and core innovation are tapping into a fervent customer base.

In April, speaking on McDonald’s loyalty potential, CEO Chris Kempczinski told investors roughly 80 percent of the U.S. population visits a McDonald’s at least once each year. It’s a relatively staggering concept, but not really a surprising point. Tim Hortons has one to rival. Eighty percent of Canadians visit the brand every month, company CEO José Cil says in an interview with QSR.

Stateside, it can be easy to lose sight of how deep the chain’s roots run in its home base. There are 3,949 stores in Canada, and Tim Hortons holds the top spot for market share by a sizable stretch. At year-end 2021, there were 637 locations in the U.S. generating systemwide sales of $687 million on average-unit volumes of $1.2 million. Globally, there were 5,291 stores, up from 4,949 the prior year.

Clearly, in comparison, there’s plenty of domestic whitespace to chase. But despite how some might view Tim Hortons in the U.S. compared to Canada, don’t call it a cult-favorite, Cil says.

“By definition, cults are outside of the mainstream,” he says. “… [Tim Hortons] is as Canadian as the maple leaf and hockey.”

Firehouse Subs CEO Don Fox, the latest concept to join Restaurant Brands International’s family following 2021’s $1 billion deal, says Tim Hortons has been a “fascinating brand” for him to learn about since coming on board. Fox clocked 23 years at RBI sister chain Burger King and knew a good deal about the company’s other pillar, Popeyes. “But I didn’t know much about Tim’s,” he says. “They are so unique, in the greatest of ways. To have that kind of penetration in [Canada]; that kind of love. They are all things coffee.”

“I’ll tell you,” he adds, “if I want to consider somebody a big brother that I want to grow up to be, in many respects, it’s that brand.”

Firehouse has had an inside look. In February, the chain added a fresh member to its C-suite for the first time in 11 years. Now-COO Mike Hancock stepped in after helming the same post at Tim Hortons.

All said, though, Tim Hortons has been on a multi-year journey to turn that brand value into consistent gains.

Among RBI’s portfolio, Tim Hortons boasts the largest digital mix, finishing at 36 percent of sales in Canada during Q1. The brand transformed its Roll Up to Win campaign into a driver of digital engagement and sales—it ran two contests last year and added roughly 3 million new members to its rewards program (more on this later).

Going back to winter 2020, Cil said he spent “more than half of his days” in preceding months focused on triggering a Tim Hortons turnaround in Canada. There were decades-old brewing technology, outdated drive-thrus, unfocused LTOs, and “less-than-stellar food sales.”

It created, to Cil’s point at the time, a “sizable gap” between Tim Hortons performance and its capability. Annual comps in fiscal 2019 fell 1.3 percent in Canada. They increased 0.9 percent in 2018.

Much of what emerged from Schwan and Cil’s dive centered around tech. RBI began to introduce fresh brewers and water filtration systems at each Canadian store. And after data showed drive-thru growth outpaced the front counter, Tim Hortons started (as part of a broader RBI initiative) to install outdoor digital menuboards via an investment of $100 million, in Canadian dollars, from the chain’s ad fund. They were designed to integrate loyalty programs and allow for customized menu items to be displayed based on guests’ favorite purchases and redemption history. That quickly started piloting in Canada with the Tim Rewards program. 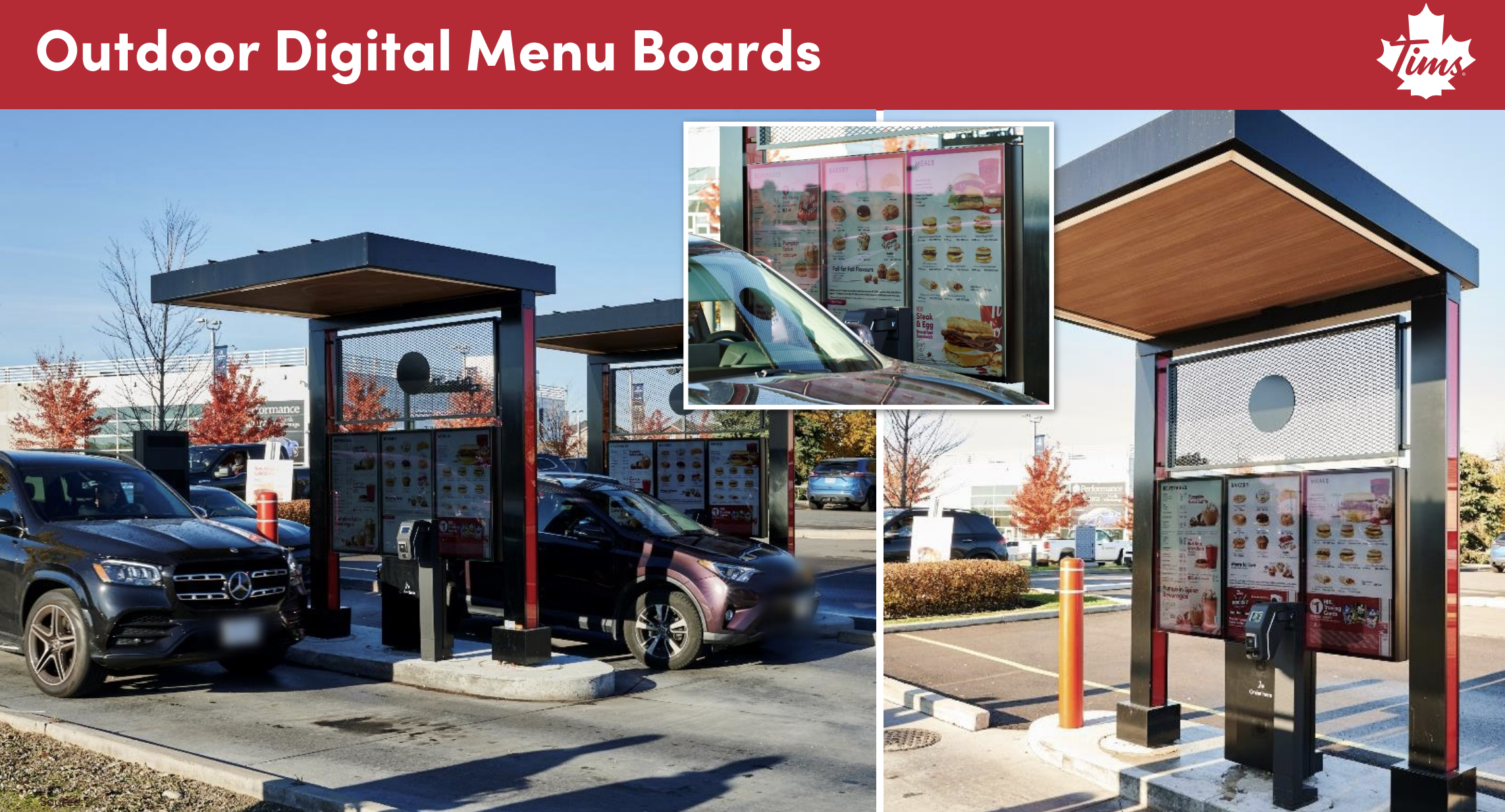 Switching to digital menuboards saved RBI millions on printed menus and bumped speed of service, the company says. That rollout was “substantially complete” as of Q1.

Over the past three years, Tim Hortons’ drive-thru transactions have surged from 51 percent of sales to 68 percent.

Tim Hortons responded with format evolution. As seen below, it’s conceptualizing a tandem setup as well as the mobile pickup lanes that have proliferated the industry of late.

In the U.S., Tim Hortons launched two next-generation designs in June. One being a 900-square-foot drive-thru-only model designed to maximize efficiency and speed of service. The prototype is integrated with Tim Hortons' app, so guests can easily order ahead, collect rewards points, and access weekly exclusive offers. The new store also features mobile order parking spots. The other prototype was a 1,600-square-foot restaurant with 24 seats inside.

As part of both designs, the menu is simpler, but with new items like refreshers and energy drinks, alongside mainstays such as Iced Capps, doughnuts, Timbits, breakfast sandwiches, and Original Blend and Dark Roast coffee.

The first drive-thru only model restaurants were scheduled to open this summer in several states including West Virginia, Ohio, Michigan, and New York.

To the earlier point, Tim Hortons dialed up rewards as a frequency tool. The first phase of the company’s rollout included free coffee or baked goods after seven visits, and brought in 7.5 million active loyalty members and a registration rate of 25 percent. Phase 2 used more of the menu and personalized offers based on purchase history. Essentially, it shifted from a visits incentive to a points one where guests could redeem after a number of purchases. It dragged sales a bit out of the gate as Tim Hortons worked to convert loyalty guests to registered loyalty guests, and to start deploying incremental offers at scale.

But the end goal was what Tim Hortons reported in Q1—a more personalized experience that drives guest counts.

On the menu side, Tim Hortons worked to bring non-dairy alternatives to the menu, upgrade taste, texture, and the quality of its bacon, and improve bread carriers for breakfast sandwiches.

In 2019, Tim Hortons also launched 60 LTOs—three times the number in 2017, which led to cluttered menus, diluted marketing communications, and incongruence with the chain’s core categories.

Today, Cil says, all product categories and dayparts contributed to Tim Hortons’ 10 percent performance in Q1. They strengthened throughout the quarter with lunch foods and baked goods as “notable standouts” on the product side, and morning and lunch flashing on the daypart conversation. The goal for full-year 2022 will be mid-to high-single digit comps. Long term, 2–3 percent annually.

“The team's quality improvement work through back-to-basics on breakfast and core coffee offerings is paying dividends strengthening our competitive positioning and market share in our flagship categories of breakfast food and coffee,” Cil said. “In fact, our freshly cracked eggs platform helped drive breakfast food market share to its highest level in over five years.”

Cil added Tim Hortons’ decision to focus on quality (over the torrent of LTOs) led to a “notable boost” in product satisfaction, with guests coming back for more baked goods. “The success of this core foundational work has paved the way for our expansion into high growth food and beverage categories, less penetrated dayparts, and doing even more exciting things with the sizeable digital business we've created,” he said.

Tim Hortons’ coffee is 100 percent ethically sourced and brewed fresh every 20 minutes. From 2019 to 2021, the chain’s hot brewed coffee market share in Canada, according to NPD Crest, is up 2 percentage points, from 70 to 72 percent. Meanwhile, breakfast food market share bumped from 57 to 59 percent. Baked goods held steady at 70 percent. 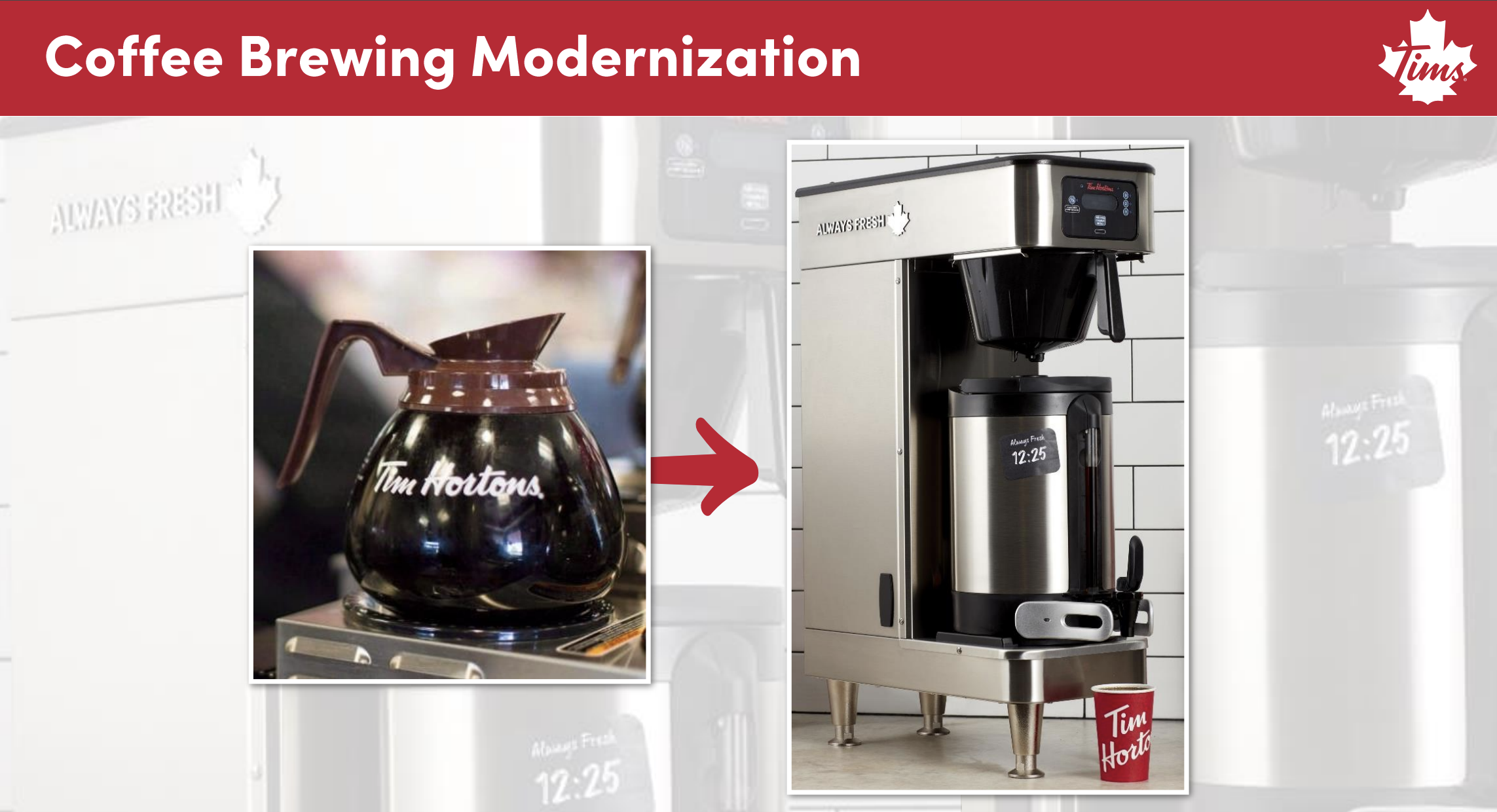 For instance, it’s witnessed a 26 percent sales uplift with espresso-based beverages. The Canadian market, per NPD Crest, is somewhere near $650 million. Tim Hortons has 40 percent of that pie.

The cold beverage market sits at roughly $4.5 billion. Tim Hortons holds 24 percent. As Starbucks can attest of late (nearly 80 percent of U.S. beverage sales), the cold category is racing ahead of hot.

With p.m. foods, Tim Hortons appreciates about 4 percent share in a $8.5 billion market. The company recently launched loaded wraps, and bowls are on deck for the summer.

In regard to the Roll Up to Win contest, it’s been an iconic part of the brand’s history. Tim Hortons simply propelled it into the digital arena. Traditionally, it was a brand building opportunity and traffic initiative. Now, it’s more a driver of digital engagement and sales. The chain ran two of the contests last year that collectively added about 3 million new registered members. In 2022, in an effort to further engage those users, RBI COO Josh Kobza said, Tim Hortons embedded them into its digital ecosystem by building points-based incentives to use mobile order and pay, “introducing an unprecedented number of guests to this service mode,” he said. Tim Hortons partnered with brands to offer a prize pool north of $100 million (Canadian)—its largest yet. Having partner-funded prizes, Kobza added, allowed Tim Hortons to reduce the required owner investment and level of product cannibalization, “meaningfully increasing same-store sales contribution, year-on-year.”

“This is just the tip of the iceberg in terms of what we can do with the digital assets we’ve built at Tim Hortons,” he said.

Cil noted Tim Hortons’ rewards members tend to be the most loyal users of the brand, and tout the highest frequency.

“I think the frequency is, I guess, to put it clearly, astounding,” he said. “It's really incredible how often our Tim's rewards members are using our app, how often they come and visit us and go to the stores. And I think one of the other things that we've seen that's been really interesting to our teams here is, is that we see as we deploy new features in the app, things like our hockey challenge, things like roll up, we see those guests start to interact with our app even more frequently.” 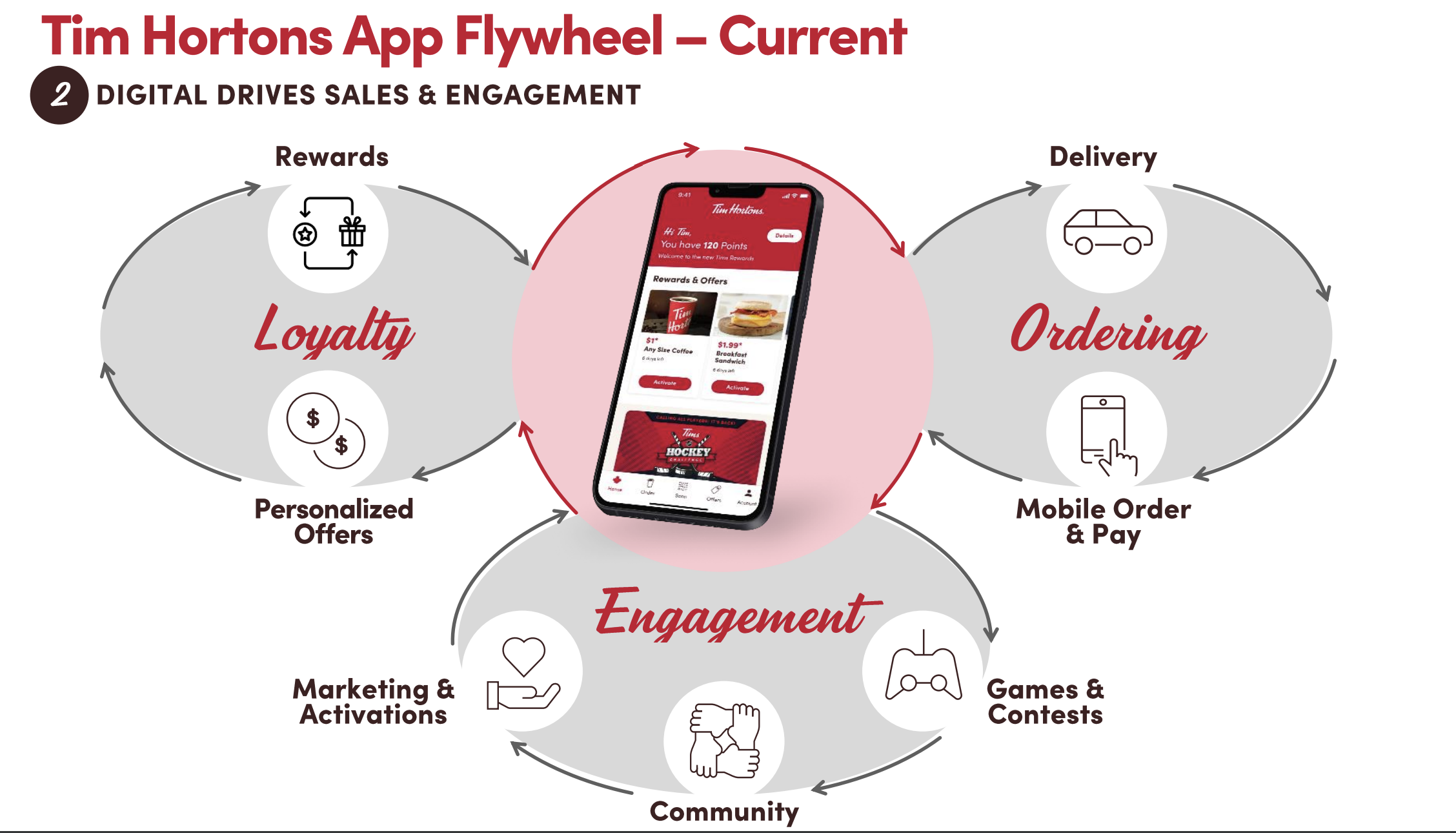 By monthly active users, Tim Hortons’ 4.3 million figure beat Uber Eats (3.9 million) in Canada. By average days active per user, it was well ahead at 23.9 versus 15.5.

Simply, Tim Hortons has the largest food beverage loyalty program in all of Canada.

Beyond the engagement, it’s a critical top-line driver. Tim Hortons’ non-digital guest spend an average of $81 per year. The digital guest is $354. For average annual number of visits, those numbers are 15.4 and 76, respectively.