The McChicken was the most-redeemed item in 17 states and Washington, D.C.

MyMcDonald's Rewards, the burger chain's first loyalty program, has attracted more than 21 million members in the U.S. since rolling out nationally in July.

The McChicken was the most-redeemed item in 17 states and Washington D.C., (including New York, Florida, and Pacific Northwest), followed by the Happy Meal in 17 states (California, Texas and Southwest U.S.), and large frappe in 14 states (mostly Southeast). Large fries were the most popular in Connecticut, and large coffee was the top-redeemed product in South Dakota.

Nearly 2 million Happy Meals were rewarded, and so were more than 2.4 million fries, which equates to 360 tons. Loyalty customers also added more than 17 million desserts to their orders, pie being the most-frequent choice. The top loyalty members in the U.S. redeemed more than 70 items each.

“Our fans have been showing us their loyalty long before the launch of MyMcDonald’s Rewards, for 66 years to be exact! So, as we wrap up the year, we want to thank each and every one of them for joining us in our loyalty journey,” Alycia Mason, vice president of digital customer experience & media, McDonald’s USA, said in a statement. “As we look ahead to 2022, we’re so excited to see MyMcDonald’s Rewards continue to grow, and keep rewarding fans with what they love most.” 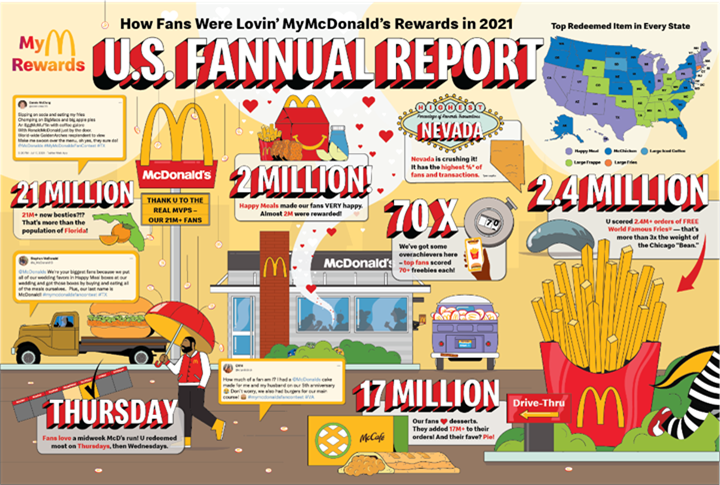 MyMcDonald's rewards allows customers to earn 100 points for every $1 spent on certain purchases. Sixteen items are available for redemption across four tiers. For instance, Tier 1 is 1,500 points, which is enough to earn a free hash brown, vanilla cone, cheeseburger, or McChicken, and Tier 4 is 6,000 points, which is enough for a Big Mac, Quarter Pounder, Happy Meal, or Bacon Egg & Cheese Biscuit.

The loyalty program launched in Germany in September and in Canada two months later. McDonald's is scheduled to bring the rewards program to the U.K. and Australia in the first half of next year, which means MyMcDonald's Rewards will be in the chain's top six markets by mid-2022.

"Our loyalty program has been an instant fan favorite and delivers great value to our most loyal customers," CEO Chris Kempczinski told analysts in October. "It also creates another touch point to increase engagement and take our relationship with customers to more responsive, more personalized places. "We're already seeing increased customer satisfaction and higher frequency among digital customers, compared to non-digital."

The rollout of MyMcDonald's Rewards ha fueled the burger giant's digital channels. McDonald's app was downloaded 2.8 million times in November, according to app intelligence firm Apptopia, the highest among any quick-service chain. The next best was Starbucks at 1.3 million and Domino's at 1 million. The chain reported during its Q3 earnings call that digital mixed more than 20 percent in its top six markets, or about $13 billion year-to-date at that point. That includes sales through the app, in-store kiosks, and delivery.

Amid Inflation, Restaurants Work to Guard Value Proposition
Chicken Wing Prices Take Restaurants on Another Wild Ride
How to Create the Next Fast-Food Menu Frenzy