Steak ‘n Shake intends to emerge from COVID-19 reimagined across two areas: Firstly, structurally as it continues a 2018-hatched transition labeled the “franchise partnership program.” Designed to cover Steak ‘n Shake’s system with single-unit, entrepreneurial-minded operators, the brand asked franchisees to make an upfront investment of just $10,000. Steak ‘n Shake then constructs the site, pays for equipment, and assesses a fee of up to 15 percent of sales as well as 50 percent of profits.

Most of the revenue stems from the profit share, but the less tangible angle is a broader one. As Biglari Holdings CEO Sardar Biglari said previously, “we are seeking to harness the power of entrepreneurs and to create a company of owners.” Or, as Steak ‘n Shake explained, “achieve operational uniformity by marshaling the efforts and strengths of entrepreneurs.”

And it dovetailed into other disconnects, Biglari said. The economics of the chain’s full-service setup—high-quality, low-priced burgers and shakes created to generate volume—“did not work in the modern era.” Steak ‘n Shake’s hallmarks, its Steakburger and milkshake, were not reaching guests with fast, hospitable service (absentee ownership was a lead culprit here), or enough value.

Taking a page from Chick-fil-A’s single-unit operator playbook was where Biglari wanted to start. “For a franchise partner to be awarded a restaurant, he or she must demonstrate the gold standard in service,” the company said.

The pandemic then set Steak ‘n Shake’s quick-service flip into motion as units began to close and reopen under a radical shift—they kicked table service and added kiosks. It marked a departure for Steak ‘n Shake that traced back 88 years (the brand’s early quick-serve iteration debuted in 2012). Guests can now order via the counter and use an app or tap self-service options in-store.

The chain spent about $50 million in capital expenditures to do so (remodeled interiors, new point of sale, self-order kiosks), roughly $40 million of which came in fiscal 2021. The capital outlay through 2021 averaged about $160,000 per unit.

Biglari said in a February letter this process would, naturally, take some time to mature. “Of course, only after a few years can our capital investment be proved warranted,” he said.

It’s an investment Biglari Holdings, which also owns Western Sizzlin, several insurance operations, like First Guard, as well as Maxim and two oil and gas companies (Southern Oil and Abraxas Petroleum), dipped into its own pocket for. Steak ‘n Shake required capital from its parent company last year to pay off debt of $152.5 million and fund additional capital needs.

Early views have provided some green shoots, though.

Biglari called the self-service dining rooms “walk-throughs,” which he said are approaching the performance of Steak ‘n Shake drive-thrus. Under the prior setup, annual sales per employee, measured on a full-time equivalent basis, were about $64,000, he said. They climbed to nearly $118,000. Steak ‘n Shake took savings and followed a quick-service path—lower prices and raise wages. In turn, the new blueprint, instead of trying to maximizing profit per customer, offered products at low prices in an effort to stimulate higher aggregate profits from “an ever-increasing number of customers,” Biglari said.

Earlier in 2022, Steak ‘n Shake’s original double Steakburger with cheese and a side of fries was selling for $3.99—the same price it charged in 1997. Steak ‘n Shake upped prices on other products, but kept its core low compared to the field, as it historically has.

Going back, Biglari, who took over for Wayne Kelley as CEO, claimed the company was losing $100,000 per day before its 2008 takeover. Steak ‘n Shake recorded a $9.8 million loss in Q3 of 2008 and saw same-store sales decline 14 consecutive quarters. Biglari Holdings said Steak ‘n Shake was “within 90 days of insolvency.” It lowered prices and traffic spiked.

But the model didn’t hold up. The company “erroneously” stayed with equipment and kitchen design ill-suited for volume production, Biglari said. What resulted was high-cost, labor-intensive slow service, as noted. Tack on inconsistency unit to unit and “we failed customers by not being fast and friendly,” Biglari said in February 2019.

“To be a market leader in the fast-food business, we should have paid greater heed to becoming, well, fast,” he said then.

In the prior decade, Steak ‘n Shake’s drive-thru and take-out revenue jumped 51.5 percent. The first 10 years were defined by an aggressive pricing formula. Now, the company needed to implement advanced production techniques and create a tailor-made system “designed to speed up service, deliver consistency, and reduce labor while safeguarding our customers’ love affair with the craftsmanship behind our handmade, homemade creations,” Biglari said.

Put differently, not change the products, but the process. And that’s the streamlined Steak ‘n Shake opening today.

Steak ‘n Shake turned in earnings before income taxes of $3.694 million. It took a loss of $2.959 million in the year-ago period.

But notably, the state of Steak ‘n Shake’s footprint is still in flux. As of September 30, the brand had 181 company-operated locations, 171 “franchise partner” units (the single-owned transitioned stores), and 159 traditional franchise.

How this has adjusted:

From here to the present, six corporate units have closed net and 19 traditional franchises, and 12 company-run locations were transitioned to the partner model.

That run included 54 transitions, 15 franchise closures, and one corporate shuttering.

Also, headed into October of this year, 39 of Steak ‘n Shake’s 181 corporate locations were closed as the company works to refranchise “a majority” of those into franchise partner stores.

This below graph includes Western Sizzlin, which ended September with 41 locations (38 franchises). 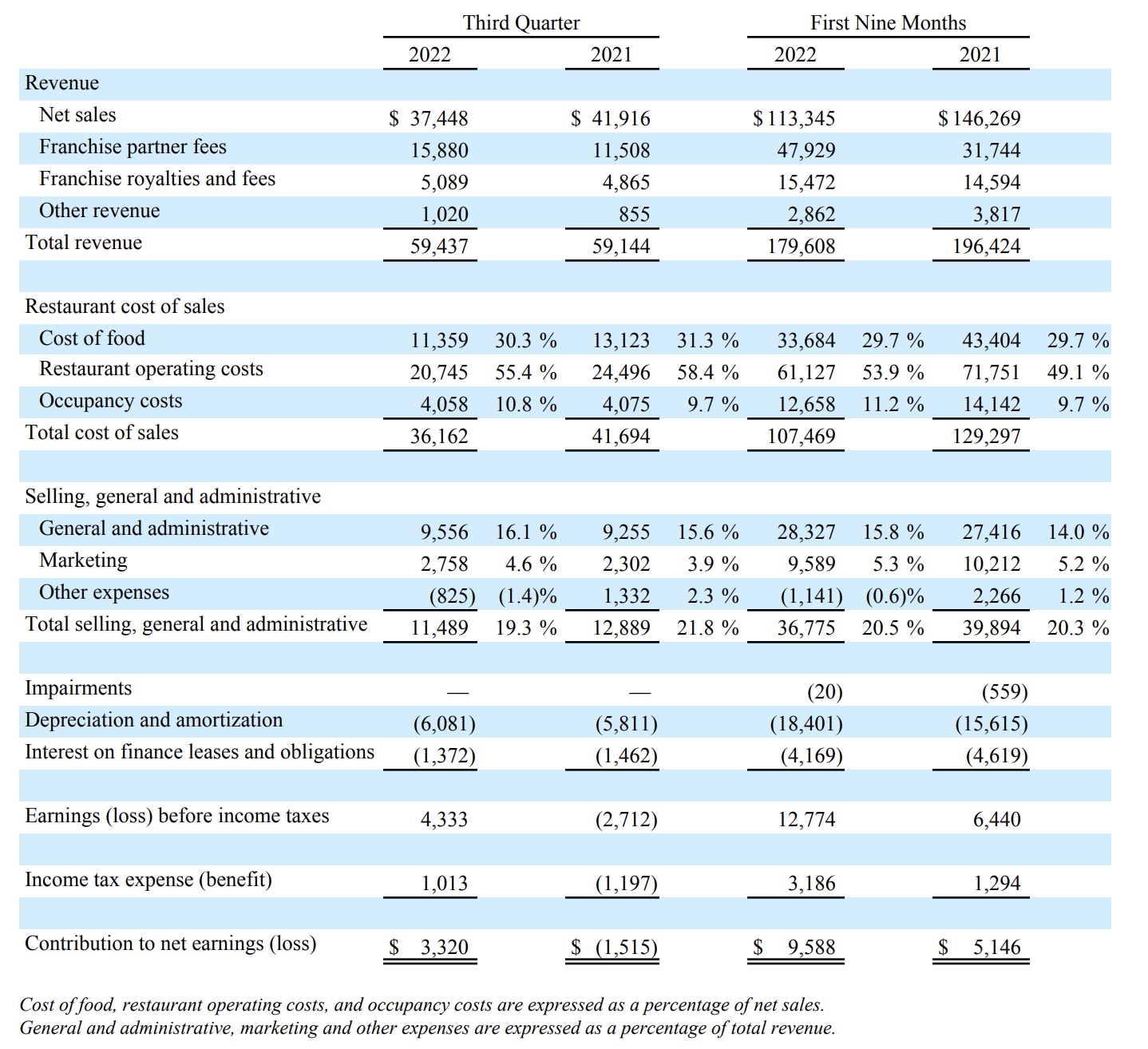 The company credited the decline in revenue of company-owned units primarily to the shift to franchise partner ones. For corporate locations, sales to the end consumer are recorded as revenue generated by the company. But for franchise partner venues, only the company’s share of the restaurant’s profits, along with certain fees, are recorded as revenue. Since Steak ‘n Shake derives most of its revenue from its share of profits, this will continue to decline as it transitions to the single-operator franchise approach.

It’s not an unexpected turn. Biglari told investors Steak ‘n Shake, thanks to the transition, would “appear to be a much smaller company than before from a revenue perspective.” The same wouldn’t be said in regard to profit, he added.

For operators, Biglari said franchise-partners are able to earn “considerable sums” from the model. Across a two-year window, the average owner made about $137,000 annually—"more than the average accountant, architect, or engineer in America earned,” Biglari said.

“This franchise opportunity cannot be purchased, only earned. Our program is designed for those long on ability but short on capital. Motivated men and women are making a difference at Steak ‘n Shake,” he added. In February, minority- and women-owned businesses accounted for 60 percent of the franchise partnerships. Black-owned enterprises constituted 21 percent.

An important shift, too, is the franchise-partnership system resembles a federation of legally and administratively separate enterprises. The goal being to cut absentee ownership out of the system