The "Go Mobile" concept is designed to create a seamless and digitally integrated customer experience.

Add Taco Bell to the list of restaurants reimagining drive thru against a COVID-19 backdrop. The Yum! Brands chain Thursday unveiled a new concept it's labeling “Taco Bell Go Mobile.” The main hook: The unit is specifically designed for customers ordering ahead through Taco Bell’s mobile app.

Slated to open in Q1 of 2021, it features five main updates built around digital adoption.

Like many chains in today’s pandemic climate, Taco Bell is shrinking its footprint to improve ROI and let digital transactions do the heavy lifting. The Go Mobile store is just 1,325 square feet compared to the 2,500 square feet typical Taco Bell boxes average.

Given the small footprint and reliance on mobile ordering, Taco Bell plans to double the lanes with a new priority pick-up option for consumers who order via the app. The new lane will supplement the existing, traditional lane, Taco Bell said. A better digital and drive-thru experience with additional access points.

Taco Bell is fitting the unit with “smart kitchen” technology integrated with its app. Namely, the Go Mobile restaurant can detect when guests arrive and suggest the quickest route for a seamless experience.

Taco Bell Go Mobile visitors will also have the option to receive their order via contactless curbside pickup—“another convenience alternative that modern consumers are looking for,” the company said.

Taco Bell Go Mobile units will roll a feature that’s quickly gaining prominence throughout quick service. In an effort to streamline the ordering experience, the store will include tablets in drive-thru lines and curbside pickup, both of which will be handled by a concierge service of employees, termed “bellhops.” Starbucks recently noted a plan to introduce handheld tablets in its drive-thru lines so employees can take orders upon arrival and boost throughput and overall perception—something Chick-fil-A and In-N-Out Burger have deployed for years. 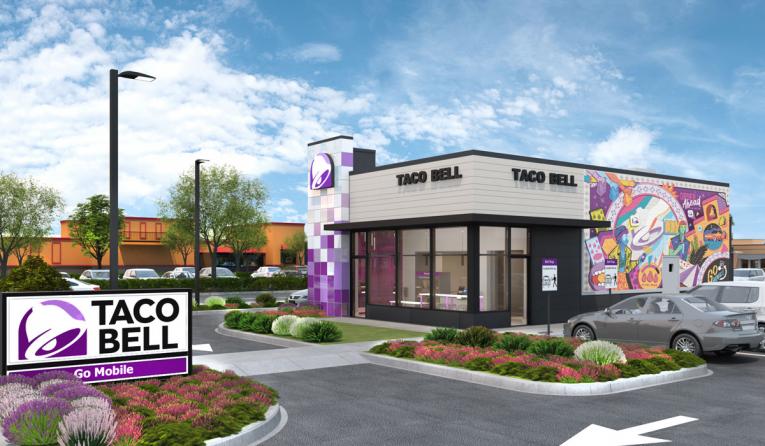 The first Taco Bell Go Mobile restaurant is still a few months away from opening.

“With demand for our drive-thru at an all-time high, we know adapting to meet our consumers rapidly changing needs has never been more important," Taco Bell president, global COO, Mike Grams, said in a statement. "The Taco Bell Go Mobile restaurant concept is not only an evolved physical footprint, but a completely synchronized digital experience centered around streamlining guest access points. For the first time, our guests will have the ability to choose the pick-up experience that best fits their needs, all while never leaving the comfort of their cars."

Taco Bell added it’s started to incorporate some of the upcoming model’s features into existing restaurants, although it didn’t provide further detail.

Fueled by COVID, Restaurants Race to the Drive Thru

Outside the restaurant, Taco Bell unveiled its mobile app beta loyalty program in July, which focuses on customization. Guests earn 250 points for every $25 spent to unlock rewards. Rapid reorder functions are expected down the line, along with other features aimed at frictionless ordering.

Taco Bell tacked on more than a million new users to its active e-commerce platforms through the chain’s mobile app and website this past quarter. And it also recently cut 12 items (August 13) from its menu in an effort to remove complexity and improve efficiency as safety protocols and execution become staples of today’s operating environment.

Taco Bell’s same-store sales declined 8 percent in Q2 off a 7 percent gain in the year-ago period. Temporary closures climbed as high as 500 at the end of Q1, with 100 locations reopening by mid-April. Taco Bell had 97 percent of its restaurants up by the end of this past quarter.

The brand has had to pivot perhaps more dramatically than Yum! cohorts KFC and Pizza Hut thanks to the fact close to a quarter of its business pre-COVID-19 was dine-in. Also, it boasted a thriving late-night and breakfast mix—dayparts hit significantly harder than most amid changes in our day-to-day routines, like going to work.

As a company, Yum! generated $3.5 billion in digital sales in the period, a 40 percent year-over-year boom that equated to a $1 billion step-up from 2019 levels.

Taco Bell CEO Mark King, who joined in August 2019, hinted at this model development earlier, saying Taco Bell “expects to continue development of its mobile strategy and is considering a new restaurant format that prioritizes dual drive-thru and pickup lanes and reduces the size of dining rooms.”

It lifted the lid off that projection Thursday.

Gibbs also noted previously that Taco Bell recognized the drive-thru opportunity for some time. “If you think about a Taco Bell, for example, during a lunchtime, their drive-thru lane is packed,” he said. “The only way we can increase sales at Taco Bell at lunch is to get more cars through the drive thru and shave seconds off the drive-thru time. But if you add into the equation the ability to do curbside carryout and take some of those cars out of the drive thru and put them in the parking lot in designated stalls where we can bring food to them the minute they pull onto the property because they’ve ordered it in advance, now that opens up additional capacity. “

The new model also likely slows—at least for now—the roll out of Taco Bell’s “fast social” units, which it revealed in early March. The design was intended as a revamp to the brand’s urban Cantina concept. A Time Square location was set for the fall. Another for San Ramon, California. The latter would center on gaming and allow customers the opportunity to play video games while ordering food.

Additionally, Taco Bell was going to pilot a conversion of three traditional suburban restaurants into Cantinas and evaluate their performance.

Taco Bell has introduced about 30 Cantinas across the U.S. since 2015, part of about 60 urban in-line locations (Cantina units serve alcohol, while the others just feature a similar design).

Taco Bell targeted becoming a $20 billion brand with 10,000 restaurants around the world. “Overall, we’re still really bold,” King told QSR. “In the beginning of the year, we said we could be a $20 billion system, and we still believe that.”

How it gets there now might just look a bit different.