Why AI is a ‘Differentiator for the Future’ at Starbucks

A lesser-known fact about Starbucks chief executive officer Kevin Johnson is that he spent more than three decades in the tech industry before joining the java giant. He clocked 16 years at Microsoft and five as CEO of networking and cybersecurity provider Juniper Networks. In 2008—a year before Johnson’s Starbucks’ board appointment—he was part of the National Security Telecommunication Advisory Committee, where he served presidents George W. Bush and Barack Obama.

Johnson took on the role of president and COO at Starbucks in March 2015 and became CEO in April 2017 when Howard Schultz transitioned to executive chairman.

So, it was always going to be interesting to see what role Starbucks decided to play in an age of unparalleled technological connection with Johnson at the controls. Doubly so given the brand’s “third-place” founding as a community-driven brand built on social gatherings.

In a recent LinkedIn post, Johnson shared Starbucks’ aspirational target—invest in technology not for the sake of technology. Rather, use it to free humans up “so they can spend more time being human.”

Starbucks sets an opening date for its first pick-up store

Why Starbucks is spending $100M on startups

Starbucks’ tech platforms over the past year have taken aim at just that: shake loose employee hours so they can concentrate on customer-facing opportunities. Things like deploying automation to lessen administrative and back-end tasks. Work on scheduling tools. Forecasting analytics. All with the goal of removing barriers to guest engagement.

This is critical for reasons beyond the obvious points. When Starbucks lost traffic steam in 2018, there were a multitude of factors at play: higher prices, innovation, promotions, and the friction that existed in its convenience elements, like drive thru and mobile pick up. And while all these hurdles are being actively addressed, Starbucks likely won’t ever compete on value or speed with some of its competitors. Local coffee shops seldom lack for ambiance, either. That makes customer experience a high-stakes game for Starbucks. As Johnson put it, “technology and innovation that is an unlock for Starbucks partners to amplify human connection in our stores.”

In response, one of the company’s utopian goals, he added, was to become world class in leveraging artificial intelligence, even to the point where it could benchmark progress against “the world’s top technology companies,” Johnson said.

Quietly, Starbucks has been working on this suite of AI solutions over the past year. Called “Deep Brew,” Johnson said Wednesday it would “increasingly power our personalization engine, optimize store labor allocations, and drive inventory management in our stores.”

Some examples of its capabilities: Deep Brew can automate inventory and replenishment orders to save time and ensure locations have the right items available for every store. It can also predict staffing needs so Starbucks can add workers where needed, when needed.

Already, the platform is being used to personalize customer offers and recommendations on Starbucks’ mobile app. It helps operators by sequencing orders, anticipating equipment maintenance, and streamlining supply chain logistics.

“That occasional customer that we're introducing to Starbucks Rewards is coming in in the afternoon, and that's how we are seeing the lift through all the dayparts." — Starbucks COO Roz Brewer on the chain's 17.6 million user base.

The overarching concept, though, goes back to the beginning—enable employees to make coffee and connect with people who walk through the door in ways other brands can’t.

“Deep Brew is a key differentiator for the future, and as we continue our quest to build world-class AI capabilities to better support partners,” Johnson said.

Here’s a look at how it can work other angles, too. Starbucks said Wednesday it’s in the process of introducing new Mastrena machines into stores, something it expects to finish within the next 12 months or so. The equipment advances Starbucks’ espresso preparation by pulling three shots at a time instead of two. That’s a bigger deal than it seems. In the older units, employees have to pull a double shot and then another single for any beverage that calls for three. So, that functionality alone significantly reduces the amount of time an employee needs to prepare drinks.

Secondly, Mastrena machines have Internet of Things sensors built in that provide telemetry data that flows into Starbucks’ support center. It can see every shot of espresso that’s being pulled, and if there’s a product that needs tuning or maintenance.

The last feature concerns Deep Brew. With the AI system’s predictive analytics, it can determine if the machine needs preventative work even before it breaks. 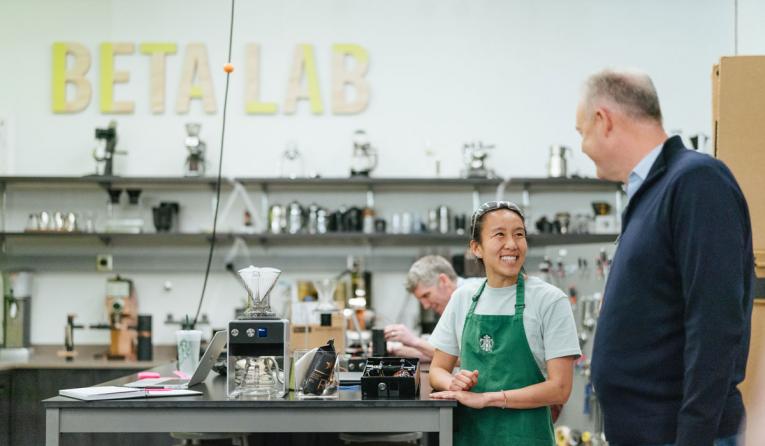 In the third quarter of fiscal 2019, Starbucks launched “Teamworks,” a scheduling app that gives employees the chance to access work schedules on the fly and clock in and out from corporate devices. COO Roz Brewer said Wednesday Starbucks progressed this innovation by working on inventory routines and automation, a food prep test, and backroom optimization. “And all of those items are fueling the work, as Kevin mentioned, around machine learning and our applications to fuel Deep Brew,” she said.

Throughout 2018, Starbucks worked to allocate additional labor, increase restaurant-level training, and simplify in-store tasks with new tech. It introduced a staffing and scheduling system “to optimize labor allocations based on partner preferences and predictive analytics,” Johnson said. Earlier in the year, Brewer noted Starbucks was able to strip roughly 12 hours of work at the store level through automation. The labor scheduling tool freed up training time, too.

Another hot quarter. Credit the cold

Starbucks’ 10 percent two-year same-store sales stack is its best domestic performance in over two years, and it continues a recent surge off 2018’s muted results.

Starbucks plans to add 2,000 net new stores globally next year. Of that, about 600 will be in the Americas. 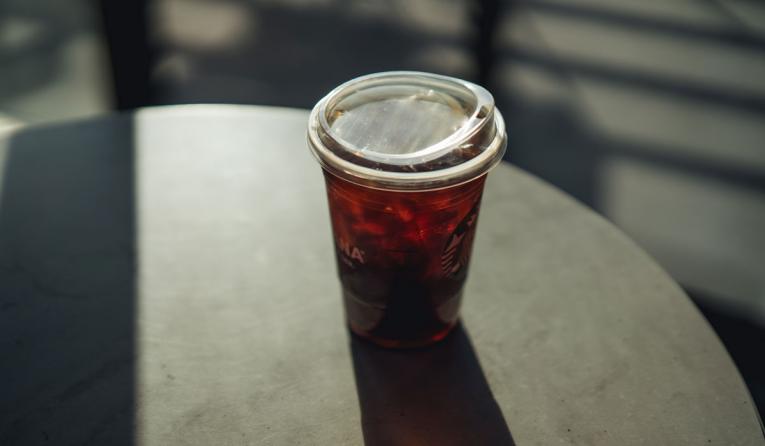 Starbucks' cold platform grew across all dayparts in the fourth quarter.

What’s worth pointing out as well about Starbucks’ sudden comps run is how it’s mixing. Beverage contributed 5 points to the brand’s U.S. same-store sales growth, led by the strength of cold beverages, Johnson said. Starbucks completed the rollout of its Nitro Cold Brew across company units over the summer—a move that included new equipment. Starbucks supported it with national advertising for the first time in August. It was effective in drawing in non-core, “occasional” customers, and upping afternoon business.

Q3: Starbucks' dramatic spike is the start of something big

Q2: A rise in cold drinks heats up the afternoon coffee wars

Overall, transactions lifted throughout for Starbucks for the second consecutive quarter and beverage led the comps growth for the fifth straight period (food contributed the remaining point in Q4).

Brewer said you can really break down the period’s success in two parts. Beverage innovation, anchored by heavy promotions—pumpkin in fall, flavored iced teas over the summer—and the aforementioned employee evolution that frees up workers to engage with customers.

In the U.S., Brewer said loyalty contributed nearly 2 points of comp and is making up about 42 percent of Starbucks’ tender.

She added customers embraced the choice provided by Starbucks’ new redemption tiers, with the 150-star level witnessing the majority of volume. “And we've also seen that our low frequency members that you've heard us refer to as our occasional customers, they are driving a more significant portion of the active members,” Brewer said.

“The other thing I'll mention is that we continue to grow at peak in our morning peak time frame and we're seeing actually growth across all dayparts,” she added. “That occasional customer that we're introducing to Starbucks Rewards is coming in in the afternoon, and that's how we are seeing the lift through all the dayparts. That is the work that's happening by adding the new multi-tiers to the program.”

Revamping its industry-leading rewards platform in April was met with some flak from loyal guests. The new, tiered structure encouraged sign-ups by offering rewards faster, but some people were dismayed by the shift in redemption structure. Instead of exchanging a flat 125 stars for a free food or drink item, for instance, Starbucks now apportioned free items at different levels of stars.

Once that initial curve was crossed, however, Starbucks enjoyed the benefits, Brewer said, which gear toward inspiring repeat visits and getting digitally registers customers to take the next step to loyalty. In the past, it required 30–40 trips to get stars. This “redemption for all” structure offers new members stars within two to three visits.

It addresses a big concern: Could Starbucks previously keep customers engaged long enough to pulse benefits and win them over for the long run? How many bailed after a few visits or weren’t encouraged enough to activate their rewards?

Before, members could only redeem once they hit 125 stars. Now, they’re able to cash in their stars across five tiers, ranging from 25 to 400 stars. And Starbucks added new items, including merchandise and at-home coffee, for customers to score. The last part is a no expiration feature for Starbucks credit card holders. Stars last indefinitely.

“… Right now, we're encouraged that we are moving these customers to the Starbucks Rewards level and we are pleased that we did add the other layers of redemption just so that we can expand the excitement of the Starbucks brand to a broader customer,” Brewer said.