Franchising | February 2021 | Sam Oches
Sweet Paris
Allison and Ivan Chavez founded Sweet Paris in Houston in 2012 and have since grown it to 11 locations in Texas and Mexico.

The fast-casual industry has been an incredible growth vehicle for seemingly every type of menu item, from pizza and burgers to tacos, seafood, and Mediterranean. Now one brand wants to leverage the fast-casual model to take a more niche item to the American masses: crepes.

Sweet Paris Crȇperie & Café has grown to 11 units selling sweet and savory crepes, along with a variety of café-style offerings like waffles, omelets, paninis, and espresso drinks. And the Texas-based brand is franchising the concept with the aim of growing across the U.S. and even internationally.

Husband-and-wife cofounders Ivan and Allison Chavez opened the first Sweet Paris location in Houston’s Rice Village in 2012. The pair, who’d spent time in Paris and fallen in love with the street-food experience of crepe carts, couldn’t find a proper equivalent in Houston.

“The most popular crepe offering in Houston at the time was this one-man-band crepe cart … and we would go on the weekends and see people stand in the line for 45 minutes to an hour, waiting for these crepes to be made one by one off of the crepe griddle,” says Allison Chavez. “And we thought, obviously this is a product that people are willing to wait for. Is there a way we could make it quicker, fresh, but also in this very nice experience—not having to wait on the side of the street for 45 minutes?”

A Williams-Sonoma griddle and stacks of failed crepes later, the Chavezes had landed on a recipe they thought they could turn into a viable product. The business school alums spent a year developing the concept, and once it was ready, found a landlord willing to give them a chance on a space close to Rice University.

Beyond offering a unique product, Chavez says, the Sweet Paris space was designed to re-create the European bistro experience, complete with open kitchens, Venetian plaster, and chandeliers. “The music was important; the lighting was important,” she says. “We really focused on all those things, and even the colors.” The visual appeal was perfectly timed, as Sweet Paris opened just as Instagram and other social media became serious marketing tools for brands. 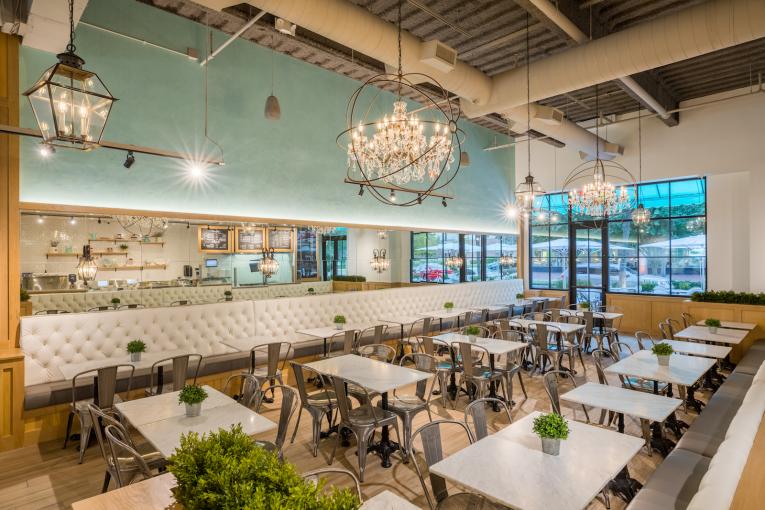 Sweet Paris boasts restaurants that are designed to imitate a European bistro experience.

The restaurant was a success from day one, with lines out the door. With no restaurant experience between them, the Chavezes enlisted an experienced restaurant manager to help tweak the operations, update the kitchen, and integrate technology. They got wait times down from 30 minutes to 5 and began to think about how they might scale Sweet Paris into a multiunit concept.

The second location opened in a West Houston development, and Chavez says that while the store was bigger and more expensive, it helped the founders understand Sweet Paris’s identify and expansion strategy for the future.

“We learned from that second store that where we need to be is lifestyle centers, which kind of dictated the continued growth of Sweet Paris in the sense that we recognize that Sweet Paris cannot be on every street corner and in random strip centers or lost on the side of freeways,” she says. “It needs to be in a place that has complementary retailers and dining options.”

Sweet Paris was eight units strong and firing on all cylinders by the time COVID-19 arrived. But the pandemic hasn’t forced the kind of revolutionary changes that many other concepts have undergone, nor has it significantly altered the model going forward. Chavez says Sweet Paris added online ordering and curbside service early on, and partnered with third-party delivery services. It also incorporated a mobile POS so seated customers wouldn’t have to return to the line for additional purchases.

But Sweet Paris’s super power may have been its patios, which it’s included in all locations. Once dine-in restrictions lifted, the brand was able to rely on al fresco dining to support its business. By October, sales had returned to pre-pandemic levels.

Chavez says Sweet Paris doesn’t feel the need to transform into an off-premises-oriented concept because that’s not what it was ever intended to be. Prior to COVID, she says, takeout business was only around 2 percent of sales.

“Our concept was meant for people to enjoy in-store,” she says. “That's not to say people didn't take some of their food out, but it wasn't a big part of our business, nor one that we focused on very much because we believe that our food is best served on the spot.”

Sweet Paris opened three locations during the pandemic, and now has a presence in Austin, San Antonio, and College Station, Texas, as well as one store in Mexico. Chavez says the company is targeting areas like Southern California, South Florida, and Las Vegas for potential growth.

“We feel like having a very diverse population is important because it makes people more adventurous about their food, and they're more interested in our food,” she says. “I think if you asked my husband even two years into this, he would have said he sees Sweet Paris in Dubai, Tokyo, and Shanghai.”

To learn more about Sweet Paris, stream the Fast Forward podcast conversation at the top of the page.