Spots less than 15 seconds grabbed the most attention.

Restaurant advertising today is forced to chase a moving consumer. There’s a lot on the table beside historic staples, like value, promotions, food quality, and creativity. Marketers are diverting spend to messages of safety, gratitude, and off-premises availability, among other COVID-19-influenced changes.

And video ads have arrived in bursts, especially among larger chains trying to get a reopening theme out.

Realeyes, a computer vision and emotion AI company, competed an analysis of 38 video ads among 10 quick-service brands, and shared the exclusive data with QSR. The company’s goal was to understand the relationship of creative duration and attentive ad viewing amid a pandemic climate.

Shorter is working better. Video ads less than 15 seconds showed the strongest performance in capturing attention among the sample of new summer ads.

“While 'eyes on screens' is becoming the new normal, attention is becoming more fragmented. We now live in a digital advertising world where a brand’s creative must earn attention to communicate its message,” says Max Kalehoff, VP of marketing at Realeyes.

More on the duration

According to Realeyes’ facial coding study of 38 quick-service restaurant ads in late June, the top 10 most likely to capture attention were all 15 seconds or less. It came across six brands: Dairy Queen, Burger King, Wendy’s, Taco Bell, Sonic Drive-In, and McDonald’s.

Among the eight 30-second ads in the study, one was in the top third of performers, three in the middle, and four in the bottom slice. While the company’s 38-sample size isn’t statistically representative of all video ads, it does point to a potential trend.

“We’ve learned from [quick-service restaurant] study is that duration may matter as much as the creative itself when it comes to effective advertising,” Kalehoff says. “All video ads lose the attentiveness of their audience over their duration, so capturing attention early, holding it, and ensuring you create emotional response throughout is critical."

"While marketers should not abandon longer-form video storytelling, they should pay the utmost attention to the major digital platforms that are capturing our attention,” he adds. “Companies like TikTok, Snap, YouTube and Facebook are rewiring our brains for shorter-form advertising—and even they underscore the best practice that 15 seconds or less is best."

Some methodology: The company measures naturally occurring human response with front-facing cameras as opt-in viewers watch the ads from multiple devices. The Quality Score (from 1-10) factors in best practices for high-performing video ads; the time to first distraction; audience retention by second 15; and the attention potential indicated by attentiveness and emotional peaks. Realeyes’ study included an average of 164 participant viewers per ad.

Burger King proved an interesting case for Realeyes. The chain’s ads ranked at the top and bottom in Quality Score. It speaks to the importance of choosing the right creative to hold attention, Realeyes notes.

For instance, Burger King’s “Stay Home of The Whopper” 15-second spot, with a Quality Score of 8, had an audience retention prediction of 53 percent at second five, 36 percent at second 10, and 23 percent at second 15. The video’s time to first distraction was 5.8 seconds. And with an “Attention Potential” score of 87, it scored in the top 20 percent among its peers for overall attentiveness and engagement.

This graph below shows predicted audience retention. “Stay Home of The Whopper” is on the left. The COVID ad is on the right. 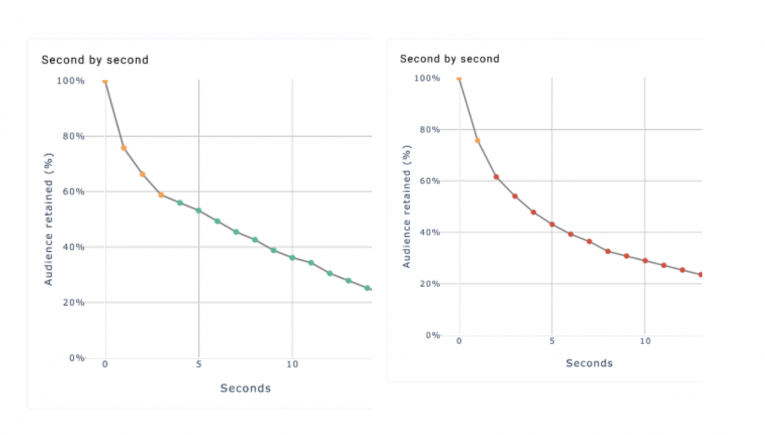 "In an age of attention fragmentation across mobile and digital platforms, marketers should re-think their video strategies by deploying many storytelling strategies across different durations. It’s all about matching the right audience, with the right platform, the right message and the right duration,” Kalehoff says. “A cinematic 30-second or 60-second ad may win you awards at Cannes, but they won’t necessarily drive results on today’s digital platforms. Where you once needed a handful of videos to run on linear TV, a single brand now could easily require several dozen variations to maximize performance—and that requirement is heightened in a pandemic when consumer sentiment and expectations shift quickly and often.”

Some things to consider

The mandate for restaurant marketers and publishers is clear from Realeyes’ perspective: Manage creative and duration for attention outcomes.

Here are some ways to look at it:

Deploy many creative strategies and formats, then test them. Advertisers with top-performing ads inevitably have some low-performers in the mix, which spread across durations and approaches. Realeyes says this underscores the importance of developing and testing multiple creative strategizes optimized for different formats and lengths.

Don’t assume that forced-explore media guarantees creative attentiveness. Advertisers running 30-second spots make assumptions about attentive viewing and video completion rates, the company said. (This is true of all ad lengths). Yet different creatives behave differently based on the message and the duration. Digital video platforms, like YouTube and TikTok, understand this reality and provide greater transparency into human attentiveness through viewability and video completion metrics.

Keep your videos short. Less than 15 seconds is the sweet spot, Realeyes says. Disciplined and agile advertising methodologies that employee many variations, often shorter formats, are becoming the performance workhorses of the top digital platforms.

Digital platforms should consider objective attention measures to incentivize creative quality. When ad viewing attentiveness is high, it signals a good experience for users, Realeyes explains. That results in more loyal audiences for restaurants to monetize, which then results in more engaged audiences for advertisers to target. Platforms and publishers should adopt objective, reliable, and perspective measures of quality as a means to incentivize better advertising creative and performance. 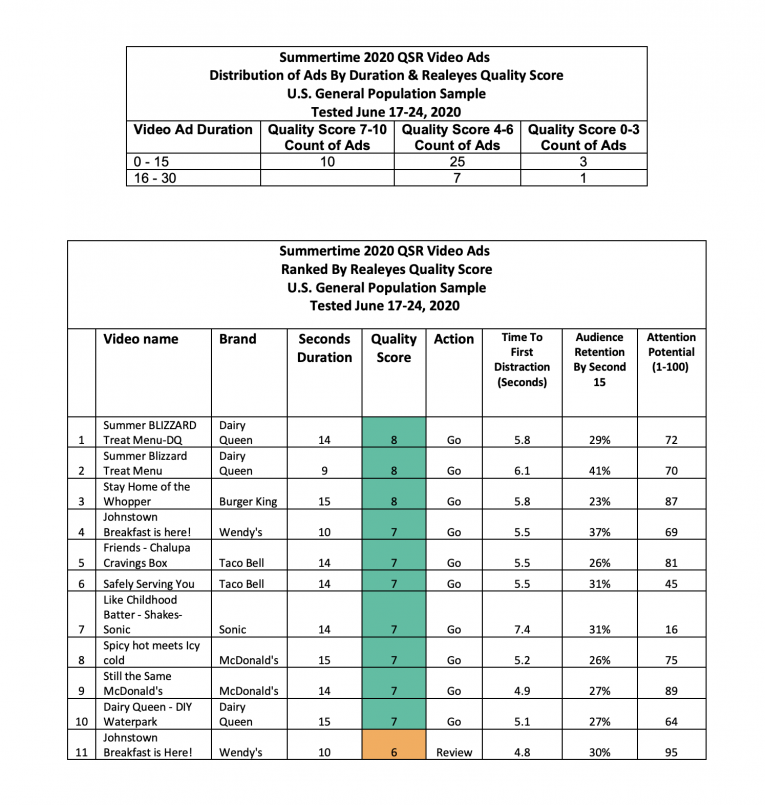 And the rest of the field. 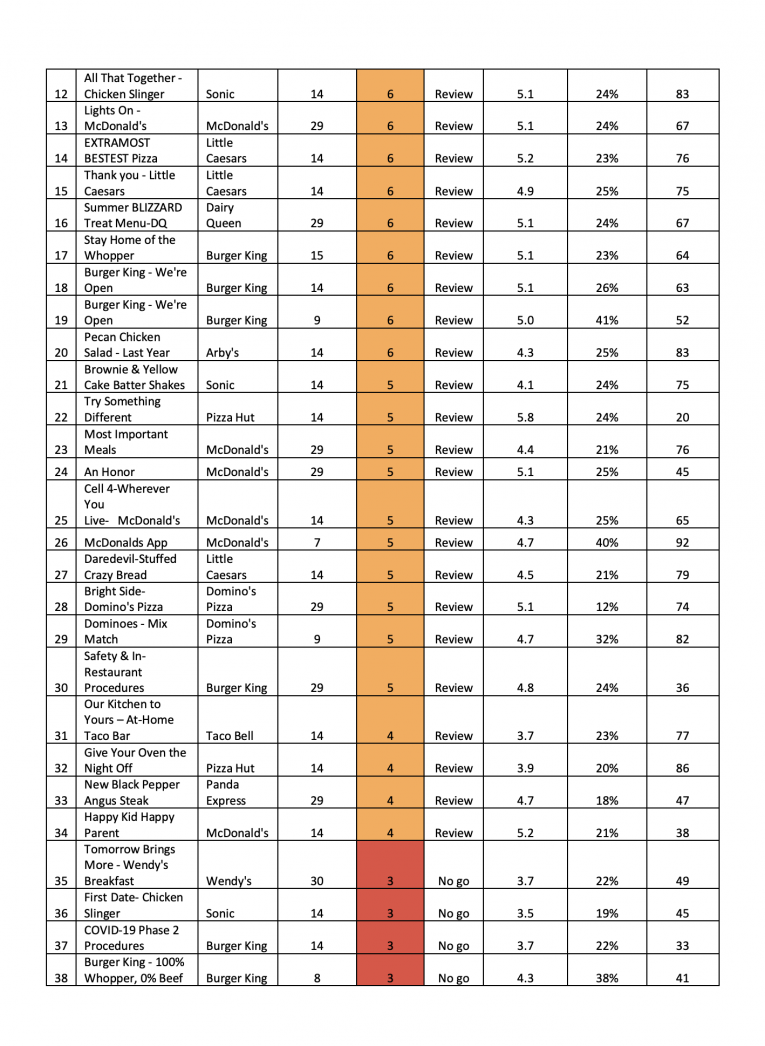