The brightly colored brand experienced record-breaking growth in 2021, and is looking for more.

Pinkbox Doughnuts has more than 100 flavors in its library.

A few years ago, Pinkbox Doughnuts could best be described as a mom-and-pop store without sophisticated branding, says owner Stephen Siegel, who purchased the chain in 2018 with his wife, Judith.

The first order of business was developing an identity, including enhanced images, slogans, doughnut cases, boxes, cups, napkins, and bags.

The results of their work came to life in September 2019, when the chain opened its third store in Las Vegas and first under new ownership. The restaurant is covered in different shades of pink from top to bottom, with walls showcasing drips of frosting, a doughnut-shaped table, and a neon sign stating, “Every day is a good day for a doughnut.” Customers are greeted by 75–80 varieties of colorful and eccentric doughnut flavors.

“I think they're wowed when they walk in the store just from the overall look of the store, and I think they're overwhelmed by the case of doughnuts,” Siegel says. “I don't think anyone has been in something like this before. We call it the Willy Wonka of doughnuts. It’s like Disneyland inside there. That's part of our brand, as well—not just fun doughnuts, but the whole fun experience of the core of the store.”

In terms of operation, Pinkbox phased out wholesaling so that it could focus entirely on serving fresh products to retail customers. Then in August, the company revealed it was named the official doughnut partner of the Las Vegas Raiders, which are housed in the newly built Allegiant Stadium. Pinkbox has a booth in the facility, giving the chain access to customers from across the country, particularly nearby markets full of growth opportunities.

There were two stores when Siegel acquired Pinkbox, but the company since expanded to seven outlets, most of which are open 24 hours. Three units opened in 2021, a new record for the brand. In 2022, Pinkbox aims to debut a minimum of seven to 10 stores in Las Vegas and new out-of-state markets in Utah, California, and Arizona. In the year afterward, Siegel expects another 20 locations.

All of those will be company-run, with the chain showing no interest in franchising at the moment.

“At this point we're focused on managing our own stores, managing our own growth,” Siegel says. “I'm not going to rule it out in the future, but that's not any part of our short or near-term plan. Every day we're getting asked to franchise or open up in someone's city or state.”

This year’s growth includes the brand’s first drive-thru, which opened in April. Siegel says the biggest learning is how much Pinkbox’s experiential interior is lost when customers receive orders via drive-thru. The chain also sells more coffee through the channel than doughnuts, and that’s not the approach Pinkbox is looking for, Siegel explains. Although he can’t reveal any plans yet, the owner says the brand is working on ways to enhance the drive-thru experience while also encouraging people to enter stores so they can appreciate the expansive glass case of doughnuts.

The biggest benefit, arguably, is the store doubles as a commissary for units that do not bake onsite. This is the same model implemented by Krispy Kreme in recent years, in which doughnuts are prepared fresh each day in production hubs and transported to several spokes, or points of access.

Going forward, Siegel says Pinkbox will move further toward that approach, with smaller stores that are more retail-focused.

“I think the one thing you get more than anything is more quality control and more oversight in one place than we do in multiple locations,” Siegel says. “We're able to have a little bit more tighter operation to watch what's being done in the commissary versus having multiple stores doing the same thing. It's just harder to manage and watch for quality and efficiency and that type of stuff. I think going under one roof with it all does make it more efficient just for all-around purposes.” 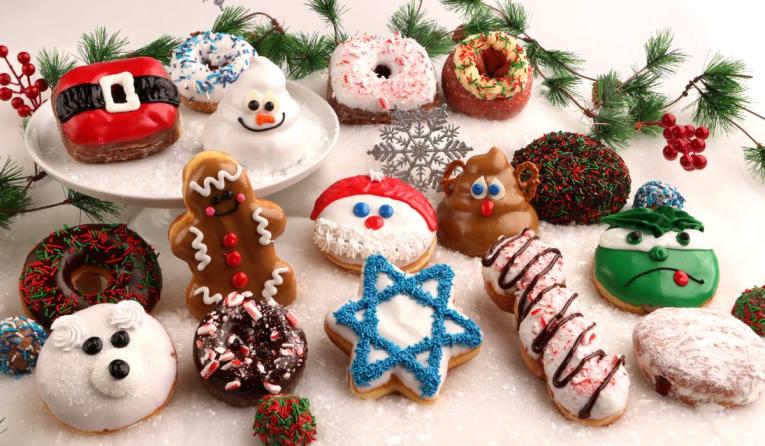 The brand releases speciality doughnuts for the holidays. 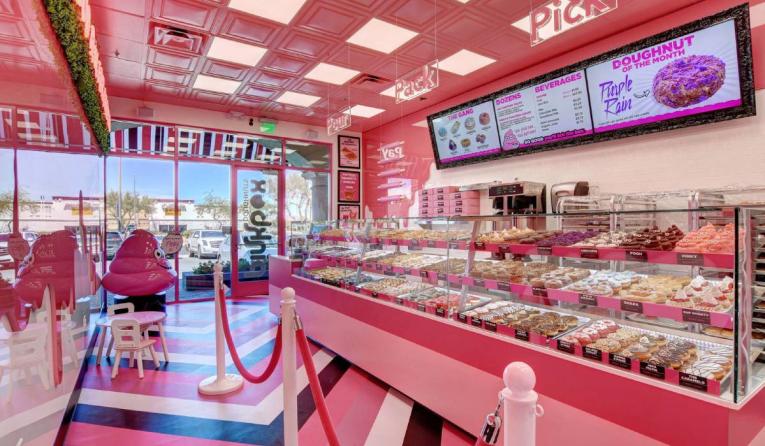 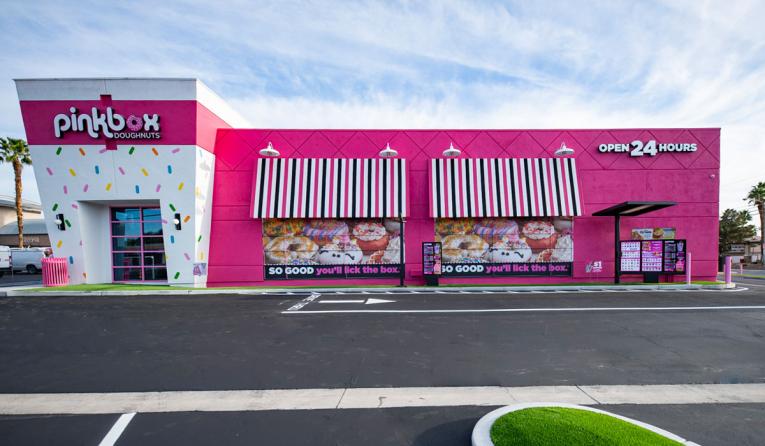 The chain's first drive-thru opened in the spring. 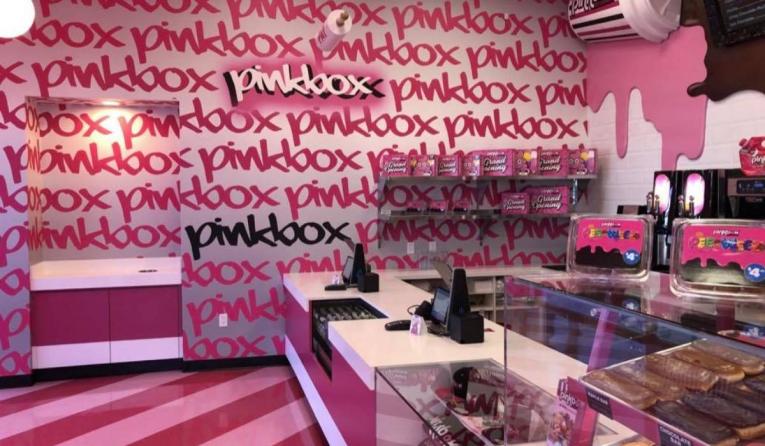 The creative interior of the first drive-thru location. 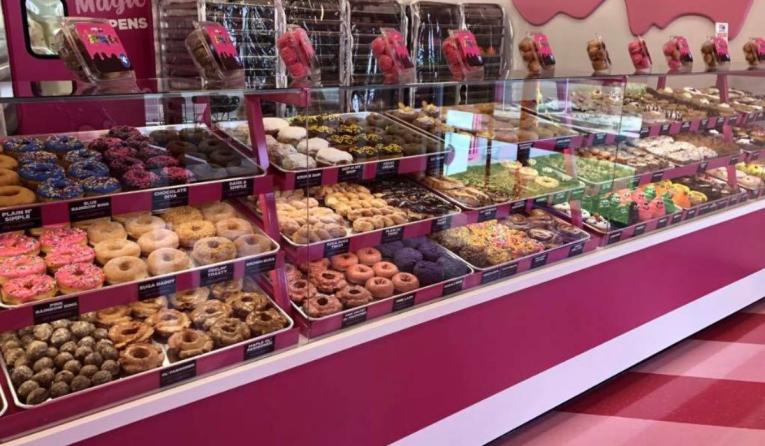 The selection of doughnuts in the drive-thru unit.

Although 75–80 flavors are available each day, the full library features more than 100 varieties. Siegel says he comes up with most of the ideas and taste tests them each week. The chain routinely displays one product as Doughnut of the Month; for December, it’s the Candy Cane, a glazed raised twist covered in white frosting, drizzled with chocolate, and sprinkled with peppermint candy cane pieces. Additionally, the brand rolls out holiday-inspired items and boxes. For instance, Pinkbox launched four flavors for Hanukkah, 13 for Christmas, and eight for New Years.

Doughnuts are rotated in and out of the menu each month based off of what’s selling well, comments on social media, and other pieces of quantitative and qualitative data. Pinkbox’s portfolio is so large that some doughnuts created last year haven’t debuted yet. Siegel emphasizes that no flavor has ever been a flop; there’s always a portion of customers that are upset when a particular doughnut gets pulled.

That’s why certain ones are never taken off the menu.

“People just absolutely freak out,” Siegel says. “‘What happened to my lemon doughnut or what happened to cherry donut?’ How dare you take it off the menu!' It's also very touch and feel on that because when they get hooked on what they like and you touch what they like, you remove it off the menu, they get pretty upset. It's pretty strategic about what we pull off and what we put on and we can only have so many doughnuts.”

But just because beverage options have been bolstered, doesn’t mean Pinkbox is trying to follow the lead of Dunkin’, which dropped the word “donuts” in an effort to put drinks at the forefront, Siegel says.

The primary focus will always be to sell doughnuts, in all shapes, sizes, and tastes.