The company believes it can open as many as 1,000 units in China.

As the COVID pandemic approaches eight months, Wingstop has continued to obliterate expectations, including its own.

At the end of Q1, the brand projected 95 net new openings for fiscal 2020. In Q3 alone, the brand achieved 45 percent of that total with 43 net openings—the company’s best quarter for unit growth since 2016. As a result, the projection has now jumped to 135 to 140 net new restaurants for 2020.

Wingstop reached the 1,500-store mark this week. Unit count is consistently rising despite the chain losing two to three months of construction time.

“This pace of development demonstrates the strength of our model and the enthusiasm our brand partners have in growing with the brand and operating more Wingstop restaurants,” said CEO Charlie Morrison during Wingstop’s Q3 earnings call.

More than 80 percent of Wingstop’s pipeline comes from current franchisees who have seen up close how the brand has remained virtually immune to the COVID crisis.

Same-store sales increased 25.4 percent in Q3, which represents a 37.7 percent comp on a two-year stack. The company is just one quarter away from achieving 17 consecutive years of same-store sales. Because of the upward movement, AUV now exceeds $1.4 million. For stores open at least three years, AUV is well above $1.5 million. Digital soared to 62 percent of total sales in Q3 and has raked in $1 billion in the past year.

Another key for Wingstop has been delivery, which mixes in the mid-20 percent range, or double the amount of early 2020. After the success of free delivery via DoorDash in March and April, the promotion will return for three weeks in Q4.

If those numbers weren’t enough to turn heads, there’s also total revenue, which increased 28.3 percent to $64 million; net income, which lifted 70.7 percent to $10.1 million; and adjusted EBITDA, which rose 19.5 percent to $18.4 million.

“Our franchisees, who we affectionally call our brand partners, are recognizing the strength of this brand and it’s ability to navigate even a global pandemic very effectively, and therefore, driving fundamentally what is most important for us to be looking at, which is new unit growth,” Morrison said.

“I think there’s a lot of commentary about sequential nature of comps, which drives short-term behavior,” he continued. “At Wingstop, we’re going to focus on the long-term and growing our brand and growing it by way of adding new restaurants to it while also living up to our long-term algorithm of mid-single digit comps, 10 percent plus unit growth, and continued growth in EBITDA.”

An example of how Wingstop is using its cash to accelerate development can be seen in Denver, where the brand acquired five restaurants. Volumes at these units are slightly under the system average, but the plan is to invest in the locations and prepare them for refranchising to position the market for growth. Wingstop is following a strategy it accomplished in Kansas City.

"We believe that a market like Denver presents not only the opportunity to buy restaurants, but also to add new restaurants to our portfolio and then ultimately over time franchises," Morrison said. "If we feel that's right, it's a great way to to stimulate investment among existing and or net new franchises to our system. There are other markets in the country we we are looking at to do that with. And from time to time, we will opportunistically invest in those markets by way of acquisition of existing restaurants and or development of new restaurants in territories where we believe there's ample opportunity to grow quickly."

Wingstop ended Q3 with 1,479 restaurants—1,277 U.S. franchises, 31 company-owned, and 171 internationally. Of the 43 net new openings, only nine were international, but that’s not to say the brand doesn’t have big plans outside the U.S.

In October, the brand kicked off an engagement with management consulting firm BCG to lay the groundwork for the chain’s penetration of China. Morrison said the country has the potential to hold 1,000 units over time. He added that the plan requires a thoughtful strategy, which could include an investment from Wingstop.

The new market should play a major role in the company’s overall goal of reaching 6,000 units globally.

“We remain excited about our international potential, and we’ll continue to make the necessary strategic investments to position the brand for scale and future growth,” Morrison said. 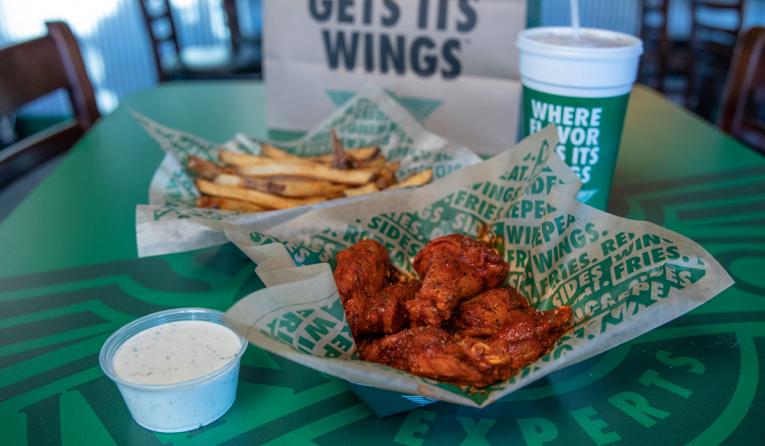 Wingstop has accomplished its success without reopening dining rooms, which accounted for 20 percent of sales prior to the pandemic.

Entering 2021, the question for Wingstop is how to maintain comp growth as it laps the pandemic-related figures and more markets reduce restrictions.

Morrison said he isn’t too worried because he knows the brand has several levers to pull. For example, the higher sales has meant more dollars in the advertising fund, which means Wingstop will reinvest in driving awareness and attracting new heavy quick-service restaurant users. He added that dining rooms are still not open, which accounted for about 20 percent of sales prior to COVID. The CEO also noted he feels confident in the chain’s partnership with DoorDash.

“As we consider what 2020 looks like, there’s no doubt we have some really high hurdles to jump, but what we don’t see in our business is a temporary increase,” Morrison said. “What we see is a long-term sustainable type of algorithm. That’s been the history of Wingstop for a long time. We’re closing in our 17th consecutive year of same-store sales growth, so we do have the confidence to be able to lap even this performance next year.”

In terms of the impact of other brands choosing to enter the wings category, Morrison said it’s more about what it does to the price of chicken wings because many of the emerging competitors are buying all of the frozen product that’s usually in the market around this time of year.

To reduce the costs pressure on franchisees, Wingstop negotiated a pricing mechanism with its largest poultry suppliers that mitigates the impact of continued inflation in bone-in chicken wings over the near-term.

“We know that a frozen wing is inferior to a fresh, and I think we see that in the quality of the product that’s out there and we also believe that most of these are short-term because in today’s current market prices for wings, it would be hard for most newer competitors to sustain,” Morrison said.

One of the more prominent virtual brands has been It’s Just Wings, which was launched in 1,000 Chili’s and Maggiano’s restaurants overnight. The restaurant said the concept is on pace to generate $150 million in annual sales.

But Morrison, who continues to champion Wingstop’s “category of one” mantra, said the brand doesn’t see much impact associated with the delivery-only concept.

“They have locations all over the country, we know that,” Morrison said. “They’re leveraging their kitchens wisely during a very difficult time for their business. So I applaud the fact that they’re working hard to try and do everything they can to support their own locations, but the only impact we’re seeing it have is they’re really acquiring a lot of the frozen wings stock out of the market that normally is available this time of year and utilizing that for this virtual brand.”

“Effectively, their virtual brand is operating the same as ours is,” he added. “Ours is operating virtually quite well. As we mentioned, we’re already on pace to generate over $1 billion in digital sales through selling wings this year.”

In terms of menu innovation, Wingstop started a test of a bone-in chicken thigh product a little more than a week ago. The CEO didn’t give specifics, but did note that it’s being examined in seven markets. Morrison said it’s been the brand’s desire for a long time to “use more parts of the bird” in strategic ways to help mitigate the impact of bone-in wing price inflation. Looking toward 2021, Wingstop is also working on flavoring innovation.