Papa Johns Won't Get in a Discount War with Pizza Competitors

Nobody is quite certain what sits on the economic horizon for restaurants. In a June study from Restaurant Management Solutions, 45 percent of consumers said they were “trading out” (ordering less often) and the percentage of guests trading down was growing as well. When asked why they felt the value proposition at restaurants had shaken, 73 percent said prices had simply gone up. Forty-five percent added portion size, or “shrinkflation” was dampening their outlook, and 13 percent cited “poor service,” which was up from 8 percent the previous quarter.

For the past two years, Papa Johns CEO Rob Lynch said the chain’s top priorities—this is true broadly of the sector—centered on keeping employees and customers safe, and meeting consumer demand.

“Today, we’re operating in a very different environment,” he said. “This is providing the impetus to focus our innovation mindset on our operations to improve customer service and delivery capabilities and efficiencies, which will grow long-term restaurant profitability across the system.”

Another way to frame this is restaurants are focused on providing value to justify the cost and reward the occasion. But it’s not always as elementary as racing to the bottom.

For Papa Johns in particular, the brand has been consistent in its approach to stray from national deep discounts. “We have a very robust value strategy,” Lynch said. “It’s just not the same as everyone else going out and putting the lowest price point on national television.”

In light of this, Lynch added, Papa Johns is “pretty much” the only pizza player delivering positive comps. The brand’s North America’s same-store sales increased 0.9 percent in Q2, which pulls out to a three-year stack of 34 percent. Domino’s Q2 comps declined 2.9 percent in the U.S., while Pizza Hut slid 3 percent on the top line.

“I think that there's something to being able to deliver positive comp sales and better transactions without having to go and race to the bottom for the lowest price points,” Lynch said.

In recent quarters, Papa Johns pushed premium innovation, namely around its stuffed crust platform, which is driving orders and some of the highest percentages of guests expressing intent to repurchase in brand history.

Yet Lynch did emphasize a larger point to investors during Thursday’s recap: All this premium positioning isn’t to suggest Papa Johns doesn’t deliver value.

Versus spreading a message nationwide, Papa Johns flexes market-to-market. “A discount in San Francisco is different than a discount in Atlanta and Ohio,” Lynch said. The brand’s co-ops have funds they contribute into they can use to manage local markets. “This way,” he added, “they manage them depending upon the price sensitivity of their customers in that region.”

Also, Papa Johns has ramped up efforts to deliver value through loyalty. There are 25 million members in the rewards program and “we’re able to surgically deliver incentives that motivate people in different ways to drive transactions,” Lynch said.

Where Does Papa Johns Rank Among the Nation's Top Brands?

The Pizza Industry Adjusts in the Wake of COVID-19

Papa Johns is Taking its Own Pizza Path

Across the industry amid inflationary pressures, consumer sentiment has softened, he noted. But pizza historically offers strong value relative to other categories. It’s why pizza chains weather economic cycles better than most. “Because we invest in better ingredients, consumers recognize the superior value already offered by Papa John's Pizza and can feed their family a delicious, high-quality meal very affordably,” Lynch.

Returning to loyalty, however, the one-on-one marketing has given Papa Johns another lever as it works to guard margins. Through the platform, it offers more price sensitive customer incentives. At the same time, those guests who are less wallet-focused are targeted with opportunities to self-select into Papa Johns’ high-end innovations. This has bifurcated the chain’s customer base, Lynch said, and helped store-level operators raise profitability.

“In the current environment, there is always temptation to chase transactions through aggressive discounting,” he said. “As we evolve our revenue management capabilities, we have instilled a disciplined approach to provide the right promotions to the super value-oriented customer without risking the erosion of our brand or pricing integrity.”

Year-to-date, Papa Johns’ menu prices are up about 7–8 percent systemwide. The local, nuanced approach insulated that effort. Almost every market, for instance, offers an $8 carryout special for a large pizza. Again, whether those deals or trade-ups are widely marketed is where the difference lies—Papa Johns isn’t broadcasting on a national level.

Seventy-five percent of Papa Johns’ business today is e-commerce. “So our customers are going on the apps, going on the web and looking at our price points and our localized offers are available, readily available to everyone going on those digital channels,” Lynch said. “So we absolutely can compete for that value customer. We're just doing it in a different way. And I think so far, we've been differentiated in that and have been able to outperform as a result.”

Papa Johns expects to take additional price in the near future, a couple of hundred basis points or so.

“Our teams over the last two years have been mining and enriching that data and we continue to get better and better at it,” added Lynch, who came to Papa Johns in 2019 with deep marketing chops, including stints as VP of marketing at Taco Bell and CMO of Arby’s. “And now, given our strategy on how we're going to become a great player in this value mindset in this industry, it's accelerated, and we're even more confident with the ways we're using that data to really reach out both through our organic channels, but also through paid channels. … We're leveraging paid media to directly target across digital channels customers that we have determined have the highest propensity to buy our products.”

Papa Johns is targeting lapsed users, too, as well as light ones to return through organic and paid media. Lynch called this the counter to “peanut buttering large discounted national price points.”

The chain’s value strategy is paramount as the back half of the year approaches, when potential spending shifts could compound what’s already a complicated supply dynamic. Papa Johns’ commodity costs hiked 18 percent in Q2. Alongside elevated labor costs, the brand faced nearly 800 basis points of headwind for corporate restaurant segment margins, year-over-year. The strategic pricing approach reduced the impact of record inflation somewhat, resulting in a 400-basis point decline in restaurant-level margins compared to last year.

Gugino added Papa Johns expects commodity costs, in particular cheese and wheat, to remain elevated in the near-term before moderating toward the end of the calendar.

Adjusted consolidated operating income for Q2 was $40.4 million compared with $48 million a year ago. Adjusted operating margins came in at 7.7 percent, down from 9.3 percent and down sequentially from 8.3 percent in Q1. “This inflation was even greater than initially anticipated,” Gugino aid.

“Longer term, we expect to fully offset the impact of increased food and labor costs through strategic pricing actions and productivity initiatives,” she added. “However, as we saw in Q2, these cost pressures are immediate and strategic pricing must be executed carefully as to not significantly impact demand. We will continue to take a surgical approach, being mindful of retaining the strong customer base and positive momentum we've built over the past three years. 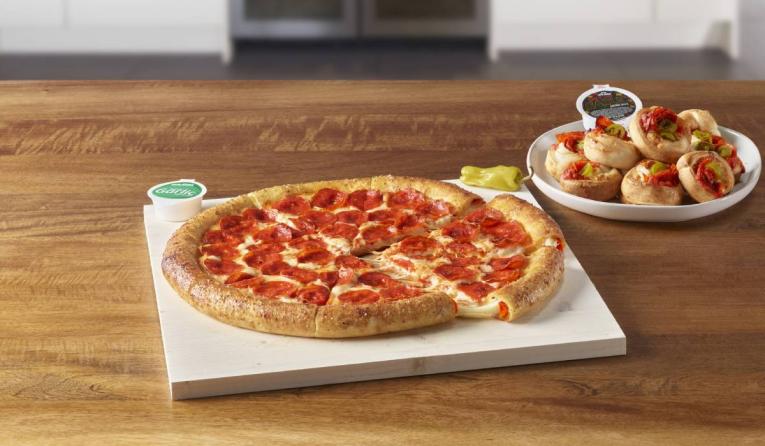 Looking ahead to growth

Returning to the topic of efficiency and systems, Lynch said Papa Johns’ efforts over the past few years to build strong partnerships with each of the nationwide third-party delivery aggregators “continues to be a strategic differentiator for us.” It’s something Domino’s hinted could be in the cards, but has not yet arrived. Pizza Hut in Q2 said 55 percent of its locations were now using third-party delivery as a service and 70 percent of domestic units could be found on at least one aggregator platform.

“We are dedicated to meeting our customers where they are, and these partnerships provide us with a new opportunity for consumers to discover our brand through an incremental sales channel and an ability to leverage their incremental delivery capabilities, particularly at peak times,” Lynch said.

In terms of growth, the brand opened 47 net new units in Q2 and plans to bring 280–320 to market for the full year. Lynch said Papa Johns has development agreements in place with “nearly all” of its top 25 North America franchisees. In 2019, that number was just three. The multi-calendar aim remains to grow global net units by 6–8 percent annual for fiscal 2023–2025.

It’s a massive flip from the chain’s lead-up to the pandemic, when it was still battling out of a PR hole created by an ugly separation from founder and former executive John Schnatter. In 2019, Papa Johns opened 79 North America locations and closed 128. The following calendar, it debuted 64 and shuttered 63. Last year, there were 85 openings versus 35 closures.

A consumer change Lynch brought up as well is something that’s surfaced of late for other brands, like Texas Roadhouse. Seasonality has rejoined the picture. The overall quick-serve category, typically, is relatively resistant to summer travel. Customers go on vacation and pull of highways to stop at drive-thrus. But it does tend to hit pizza delivery brands and casual chains since they’re dinner destinations.

Papa Johns was tracking “even higher” on comps coming into June and the brand was bullish on its ability to exceed expectations, “ours and everyone else’s,” Lynch said.

And then it slowed in June. In travel markets, like Florida, business shot up. It’s leading Lynch to forecast a similar cadence to pre-COVID days—the prediction business will accelerate this fall when people return to school and traditional schedules.

Lynch also mentioned staffing has picked up. The company isn’t fully there (or anywhere close, admitted), “but it's definitely moving in the right direction” compared to COVID drops and especially early 2022, when Omicron dented progress.

Average hourly earnings declined by 0.16 percent, which marked the first slide since May 2020. Still, the figure is over 8 percent higher, year-over-year.

“We've seen our recruiting and retention levels improve, which gives us a lot of a lot of excitement,” Lynch said. “However, as Ann mentioned, our labor costs have gone up both as a function of wage inflation, which we do expect to normalize to a certain extent moving forward, but also as a function of some of our behavior over the last two years of just every hour, put every hour we can in the restaurant.”