That’s only because he isn’t seeing any of it. The chain recently signed a deal for 15 restaurants in and around Tampa, Florida, with franchisee Jiandong “Peter” Xu of TLC Gourmet Food International. The existing operator already owns two Tampa and five Philadelphia restaurants and signed another development agreement to open three units in Pennsylvania’s Leigh Valley.

“Our franchisees actually have been more optimistic than ever, and we've seen growth when we remodel,” Bachmann says. “So we've actually had more interest in our brand and franchising during these tough times financially then we did previously. We've made so many changes to the brand over my first three years here. I think that's starting to pay off. And people are starting to get excited about our brand. We have existing franchisees growing, and we've had more interest from new franchisees in the last few months than we've had in years.”

The roughly 240-unit fast casual is projected to open 15–20 restaurants this year, 20–25 in 2023, and closer to 30 in 2024. Bachmann owes that unit growth increase to the comprehensive revamp that’s taken place since he joined in 2019. To begin, Smashburger increased the size of its burgers, buns, and bacon to showcase its commitment to quality. The company proceeded to do the same when it came to real estate. The chain switched its site selection to a regionalized hub-and-spoke approach to take advantage of supply chain, operations, and more media penetration per dollar. The brand also changed its color palette from fast-food reds, browns, and yellows to modern lighter colors, added a TV for dine-in guests, changed in-store music, and updated its logo to include a smasher, signifying what the brand is known for. Counters were lowered and kitchens were opened so customers could see the hand-smashing process.

The first prototype with all of these changes opened August 2020 in Boston. Since then, every store debut has been molded in this updated image, and 75 percent of the corporate footprint has been remodeled. Franchisees are starting projects on existing stores, too. But further innovation is on the horizon.

Smashburger is intently focused on a virtual drive-thru design, meaning the window would be for mobile pickup orders only. The asset has been used by multiple fast casuals as of late, including Chipotle (Chipotlanes) and Sweetgreen (sweetlane). Bachmann isn’t sure what Smashburger will call it yet (likely not smash lane), but he’s confident in what it will do for restaurants. Instead of three friction points at a traditional drive-thru—speaker box, pay window, pickup window—Smashburger is working with third-party technology to accurately communicate to a guest when to retrieve their web/app order from a single window. This keeps the stack to three to four cars, allowing for a smaller footprint. 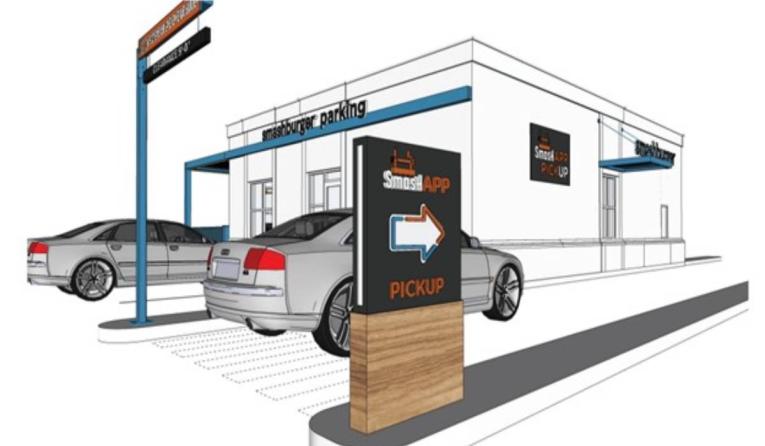 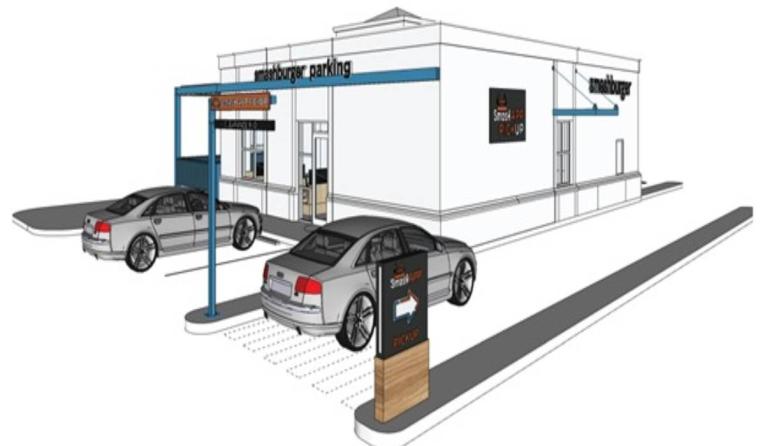 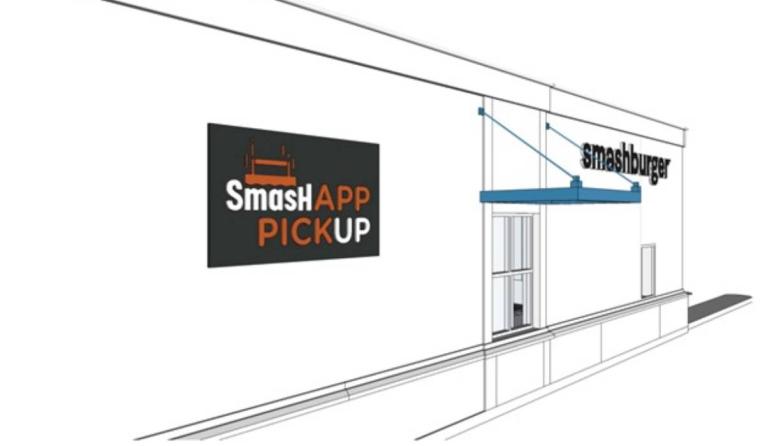 “My version of virtual drive-thru is really focusing in on making it a very fast transaction and a singular action,” Bachmann says.

The first digital drive-thru unit is under construction in Houston and will open toward the end of 2022. Smashburger recently bought out a Colorado Springs franchisee who operated two traditional drive-thru restaurants, and those will eventually be converted to mobile order lanes. Overall, by this time next year, Bachmann says the chain should have five virtual drive-thrus (four corporate, one franchise), and it will be looking to add the same technology to as many other restaurants as possible. In urban footprints where that ordering channel may not make sense, Smashburger will explore adding pedestrian pickup windows.

“My version of virtual drive-thru is really focusing in on making it a very fast transaction and a singular action,” Bachmann says. “In other words, we're hoping people are going to use their phones or go online on their computers, whatever it may be, to place an order, make a payment of the order, and then go into our single lane and pick up. We're really focused on that. I think that's the wave of the future.”

Smashburger is also dipping its toes into the casual-dining segment with a full-service bar inside a Denver restaurant. Some of the beverages include Blackberry Smash, Smoke and Spice Margarita, Coconut Mule, and Smash Rum Punch. The bar area is segregated from the dining room to not interrupt families still wanting a fast-casual experience. More are coming in New York City (two); Alexandria, Virginia; and Columbus, Ohio, on the campus of The Ohio State University. 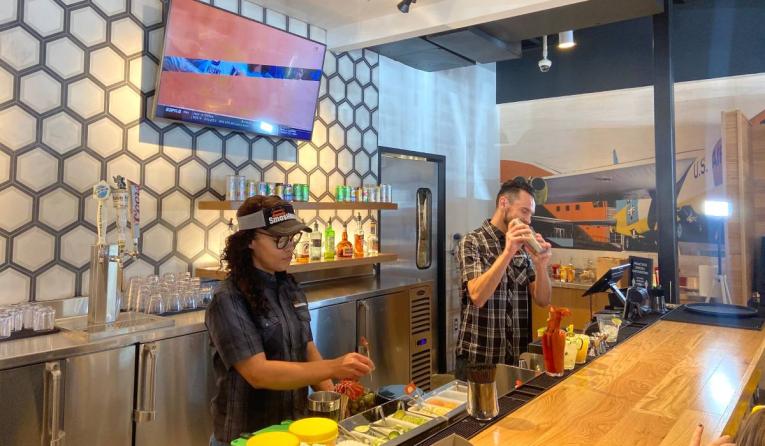 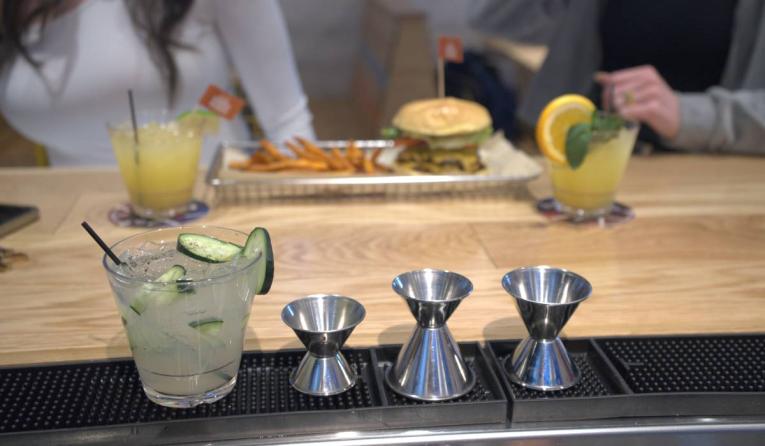 Smashburger has implemented a variety of strategies to recoup traffic.

Bachmann has years of experience in casual dining. He worked as director of operations for Ruby Tuesday for four years before becoming the Long Island franchisee for 12 years. He also worked in various executive roles at Italian chain Bertucci’s. So the industry veteran is well aware of how high-margin alcoholic beverages can help a business.

“We've had great success with it so far,” Bachmann says. “Shock and awe when a customer who knows Smashburger walks into the bar. It was fun to see their face excited and they're like, ‘Wait, I can sit here and have a beer and a burger and watch the ball game?’ Yes, you can. We were really confident that our burgers and our sides really held up as a really good casual-dining experience. We wanted to pair them with some great drinks and some great beers and some nice wine offerings.”

In light of inflation, Bachmann says Smashburger is still experiencing systemwide sales growth, although not at the rate it did in 2020 and 2021. He estimated comps to be in the single digits, but that’s lapping runs of more than 10 percent last year and around 20 percent two years ago.

Smashburger has implemented a variety of strategies to recoup traffic. For one, it’s leaned heavily into menu innovation. This year, it partnered with Eclipse Foods to offer nondairy milkshakes, which helps eliminate the veto vote, Bachmann says. Additionally, the chain brought back its Sorchin’ Hot Crispy Chicken Sandwich after selling out of the product in 2021.

Digitally speaking, the brand partnered with Olo to launch a new app and website that removes friction points. To direct more customers toward takeout—a higher-margin ordering channel than delivery—restaurants now have cubbies for easier pickup. Guests can sit at a table, scan a QR code, and have the food delivered to them for a dine-in occasion or to-go, as well.

All of it is in an effort to create a better Smashburger.

“We want to make sure that people have a really good easy operation if they want to walk in the restaurant,” Bachmann says. “I think that's key—make it easier to make it faster.”