Restaurant Operations | June 9, 2022 | Amanda Baltazar
Tacodeli
For Tacodeli, the breakfast daypart mixes 50 percent, down slightly from 55 percent prior to the pandemic.

Before 2020, breakfast paced along at a healthy clip. It was growing 15 percent and, generally, quicker than other segments, according to The NPD Group. In no short part, quick-service brands were fueling the movement as the “breakfast wars” crowded, with Wendy’s imminent entry representing one of the year’s biggest headlines.

Per research from Coca-Cola, two main tenets of evolution were at work: One, it had begun to shift from an early morning ritual into an all-day affair; and two, flavor profiles were reflecting broader trends. Namely, a greater demand for spicy ingredients, global flavors, and vegan or vegetarian dishes.

And while all of this evolved, innovation laid runway. Delivery, menu expansion, subscriptions, and breakfast LTOs all became common levers for operators.

However, breakfast, alongside late-night, were the two sharpest struck dayparts from COVID’s disruption. New at-home habits emerged as employers moved to work-from-home, cutting off coffee and breakfast commuters. Morning family meals became the norm as schools went virtual. Comfort food at breakfast also solidified as quick fixes, like toaster waffles, were no longer essential on the way out the door.

In terms of recovery, in the three months ending November 2021, according to NPD, online and physical visits to restaurants for breakfast increased by 11 percent, compared to a 10 percent decline in the same period a year ago. So that’s roughly how long it took for breakfast traffic to reach the same level as September through November in 2019.

And like broader trends, curbside, grab-and-go, digital apps, personalization, loyalty, and meal kits, helped the category rebound. Brands like Dunkin’ and Starbucks saw the daypart shift later into the day, but new rituals were rituals nonetheless.

Takeout breakfast, in particular, came into its own.

Tacodeli, which reduced its menu during COVID due to labor, says it’s ramping back up and breakfast constitutes close to 50 percent of business today, down slightly from 55 percent pre-pandemic.

It’s rolled two popular add-ins for its build-you-own dishes back in: The Veggie Nut Chorizo, which “is a hit with the vegetarian and vegan crowd and even some meat eaters,” says Roberto Espinosa, Tacodeli’s co-founder and owner, who points out that it “hits the demographic demanding the no-meat options.”

The build-your-own option is a customer favorite, and accounts for about 30 percent of Tacodeli’s breakfast sales. The three-ingredient BYO is the most popular choice, with a starting price of $3.25, thought customers can add more for an upcharge.

“As more of the workforce returns to the office, people will spend more time commuting and will opt for breakfast on-the-go,” says Espinosa. “We’ve seen breakfast steadily increase from July 2021 and after six months of continued growth we decided to reinvest in the daypart that was always our bread and butter. We have also invested in technology to improve our customers’ experience; bringing on Olo and Thanx to offer seamless online ordering and curbside pickup.” 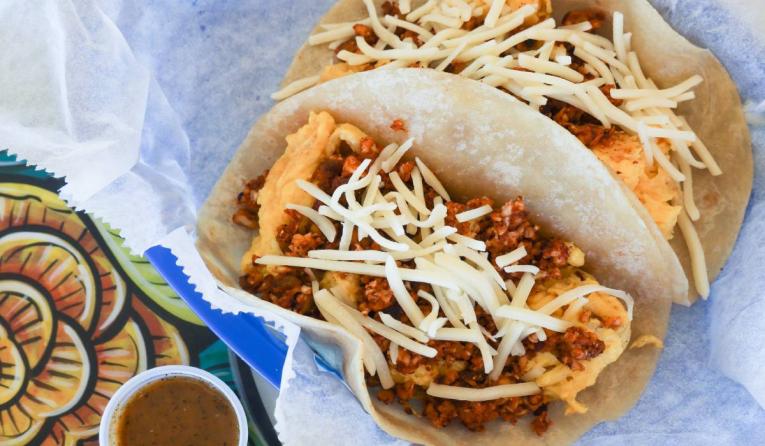 The flavor trends are back, too. The Works Café, a chain of nine locations headquartered in Keene, New Hampshire, recently launched a vegan breakfast burrito.

It features organic tofu and locally smoked tempeh, turmeric, roasted onions, roasted red peppers, baby spinach, and avocado, grilled in a GMO-free locally-produced tortilla. “More and more folks seem to be asking about plant-based and vegan options, and find it difficult to find such items on menus,” CEO and founder Richard French says. If this goes well, he’ll explore more vegan menu items. “Vegan is a small segment but a growing segment,” he says.

It’s reflected in the concept’s organic ancient grains power bowls. The Autumn Harvest vegan option “has moved way up in popularity, which says something,” French says. Other bowls include smoked salmon and bacon avocado.

Key to The Works’ food and the company’s overall philosophy is food sourced well, and taking care of the planet. Offering seasonal food is “super tricky,” French says, since “it requires local producers and has been difficult for us to have consistency among our cafes, spread out over five states.”

However, he does work with two regional produce distributors and one farm to supply seasonal items. It works best, he says with root vegetables as they store well and have a long season, and local hot house tomatoes. He’s now in early conversations to source local, hydroponically grown greens year-round.

During the pandemic, off-premises dining took off at full-service chain Another Broken Egg. To-go breakfast wasn’t just a quick-serve occasion any longer. The Orlando, Florida-based brand found it could offer its entire menu. Takeout and delivery business grew from 2 percent of sales and settled two years later at 15 percent.

At the same time, says president and CEO Paul Macaluso, who previously worked at Focus Brands and as CEO of Krystal, dining in-house increased was regulations loosened. But since all of the concept’s business occurs between 7 a.m. and 2 p.m., offering takeout “has been a way to break through those seating capacity issues. Our kitchens can handle more business with third-party delivery.”

So it’s no surprise Another Broken Egg is seeing record unit volumes, and overall sales up 21 percent last year compared to 2019. “People missed socializing, life and comfort and that’s what our café provides,” Macaluso says.

LTOs are also helping keep business strong. The company is offering 16 seasonal LTOs a year, and recently launched citrus honey and fig pancakes, with a citrus fig compote, fresh strawberries, eggs, bacon and sausage; and a sausage and fennel omelette.

“The LTOs drive business,” Macaluso says. “We have a chef-driven menu that’s pretty elevated but we try to take it up a notch with the LTOs. Some customers come every week and maybe want to try something new. This helps keep it fresh.”

And Scramblers, which has 29 stores in Ohio and Michigan, also observed an off-premises boom—from 3–4 percent of sales pre-virus to as high as 30 percent. As life recalibrated, the figure is closer to 18.5 percent. With dining rooms at capacity, this is additional revenue for the Toledo, Ohio-based company.

Scramblers’ entire menu is available for delivery, and these off-premises orders appeal largely to a younger audience.

“A younger generation has embraced this and will sacrifice quality of product and even price for the convenience of not having to take off their slippers,” Burek says. In fact, he adds, “we’re seeing a price insensitivity right now. If they can get a product they haven’t had in a while they’re happy to pay a premium for that.”

This growth to younger consumers has worked well for Scramblers, he adds, because his target market is slightly older, people in their 40s, so younger customers expand his audience.

And he’s steered clear of LTOs—until now—“because when we reopened the dining rooms, the people who came in wanted the flavors they had pre-COVID.”

However, he points out, “you have to continue to innovate.” On April 13, Scramblers relaunched its LTOs with lemon raspberry pancakes and a Nashville hot cauliflower croissant. These will run for around three months, then be replaced by the company’s fall LTOs after the summer.